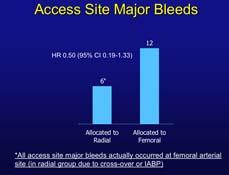 In the largest randomized trial to compare radial access and femoral access for coronary angiography and intervention, the RIVAL trial, researchers found radial access reduced rates of vascular complications, according to research presented this week at the American College of Cardiology (ACC) Scientific Session in New Orleans.[1,2,3]

The trial also found that radial access did not reduce the primary outcome measure of death, heart attack, stroke and non-CABG-related major bleeding compared to femoral access in the overall study population. The data showed these outcomes were equal for both femoral and radial access procedures.

“The take-home message is practice makes perfect,” he said. Jolly explained the high-volume centers using radial access performed very well, but it was clear from the study operators need a lot of radial cases to increase performance.

The RIVAL trial was expected to show significant improvements in bleeding and vascular complications over femoral access. While radial showed some improvement in bleeding, it fell short of producing data that would be compelling enough to drive mass conversion to the radial technique.

Jolly said only time would tell if the trial leads to greater adoption rates of radial access. However, medical consumerism will likely play a key role in mass adoption of radial access as patients seek out interventionalists who use the technique. Patients overwhelmingly preferred radial to femoral access because of increased comfort and immediate ambulation, as opposed to femoral access, where patients are restricted to bed rest for hours and are uncomfortable with the access location and clinician handling of their groin.

The RIVAL trial was designed to help determine the optimal access site for coronary angiography and intervention in patients with acute coronary syndromes. While prior data have shown that radial access results in fewer bleeding complications than femoral access, this information has only come from observational studies and small randomized trials. In addition, there has been concern that radial access could be associated with a greater angioplasty procedural failure rate.

For more than two decades, femoral access has been used in about 95 percent of coronary angiography and interventional procedures in the United States. However, the data from the previous observational studies suggest that the radial artery is associated with a 50 percent to 60 percent reduction in the odds of major bleeding, which is strongly associated with a reduction in mortality. Thus, the study researchers believed this alternate route may be an attractive option for interventional cardiologists.

“It is increasingly recognized that preventing bleeding complications may be just as important as preventing recurrent ischemic complications in patients with acute coronary syndromes,” Jolly said. “Our hypothesis was that radial access would reduce access site bleeding with preserved angioplasty efficacy.”

Radial access performed better, however, when the team examined major vascular complications. Specifically, 1.4 percent of patients in the radial cohort developed this outcome, compared to 3.7 percent of patients in the femoral group (HR 0.37; 95 percent CI 0.27 – 0.52; p <0.001). Radial access also yielded better results in patients with ST-segment elevation heart attack for the primary outcome measure and for mortality. Furthermore, radial access had better outcomes than femoral access at institutions that performed a high volume of radial procedures (the converse was not seen at institutions performing many femoral access procedures). In addition, all access site major bleeds occurred at the femoral arterial access site.

“The results of the RIVAL trial show that both access sites are safe and effective,” Jolly said. “The reduction in vascular access complications may be a reason for interventional cardiologists to use radial access. Furthermore, the effectiveness of the radial approach may improve with greater expertise and procedural volume.”

In STEMI patients, Jolly said there was no difference in the time procedures took using either access site if the operators were experienced.

The study was published this week in The Lancet.[2]