For the first time, hospitals and healthcare professionals can see all of a patient’s dose information in a central location, allowing dose optimization and improved patient safety 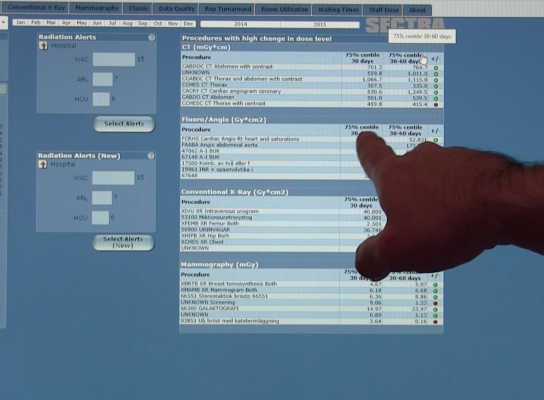 For all the benefits of medical imaging, most forms come with the inherent danger of radiation exposure. Public radiation exposure has increased significantly overall in the last 30 years, and according to a 2006 report from the National Council on Radiation Protection and Measurements (NCRP), medical imaging accounted for nearly half (48 percent) of all public exposure that year. Several high-profile cases of excessive radiation exposure due to medical imaging have brought the discussion into the public eye, which in turn has spurred greater focus on radiation safety among healthcare facilities and their various regulatory bodies.

As hospitals begin to expand or create radiation safety programs, the emergence of dose tracking software has provided a new, critical tool for collecting, measuring, analyzing and reporting patient dose — activities that have been difficult until recently.

The advent of dose tracking software in the last decade or so has, for the first time, allowed hospitals and radiology departments to aggregate all of their dose data in one place, protected behind firewalls. Rather than simply tracking patient dose and scanner output, however, these next-generation systems allow users to take a deep dive into the data to help with quality improvement, training and a host of other functions.

Dose tracking software collects exam dose data either directly from the scanner or from the picture archiving and communication system (PACS). “From a safety point of view, it’s better to take information from the machines because we know that technologists don’t always send every image to the PACS,” said Dominic Siewko, clinical marketing manager for DoseWise solutions at Philips, during a presentation at the 2016 Association for Medical Imaging Management (AHRA) meeting in August. Nearly all modalities are compatible with dose tracking software (with the exception of some nuclear medicine modalities, as dose is not measured directly from the machine).

While automated data collection is a critical first step in dose monitoring, the data is only effective when seen by the right people. Most dose tracking software includes a mechanism to disseminate information from its central source to any and all who need access. Some systems keep the data on a physical server either on- or off-site, while others operate as cloud-based systems. This type of setup allows easier, but still protected, access across multiple locations and devices.

Cloud-based dose tracking software also makes it easier to expand your collaborative network, according to Anders Österholm, vice president, sales operations for Sectra North America. “If two facilities were to merge and they were both using the same system, you could connect them with a single click,” he said. For example, when a Connecticut health system of five hospitals implemented DoseTrack, Österholm said each hospital initially wanted to focus on its own data, so five separate “buckets” were created.

Once the dose tracking capabilities are in place, the next question is who should have access to the data, and what should they do with it.

According to Siewko, many hospitals already have radiation safety committees, but their responsibilities may vary from one hospital to the next. New Joint Commission standards that went into effect in September now require a specific committee to review computed tomography (CT) protocol; however, the standards do not specify how often a review must take place.

Once the committee is established, the metrics for monitoring dose must be determined. A variety of parameters can be used to measure radiation dose, many of which can be accommodated in dose tracking software. Each measure looks at dose in a different way:

• Diagnostic reference levels (DRL) are determined using a phantom, and are not intended for commercial or regulatory purposes. Rather, they are an internal benchmark that, if exceeded, indicate an investigation should be conducted. Computed tomography dose index volume (CTDIvol) is one of the most frequently used DRLs for CT.

• Reference levels (RL), not to be confused with DRLs, are derived from real patient exam results. As a result, RLs are most appropriate for use with fluoroscopically guided interventional procedures due to the high degree of variability and potential sources of error.

• For facilities that are consistently unable to meet DRLs, achievable dose (AD) offers a lower stepping stone for dose optimization.

Regardless of what information users want to monitor, dose tracking software allows the relevant parties to more easily set goals for radiation safety performance. “In most cases it’s a matter of gathering up the data and starting to compare the protocols that should be generating the same amount of radiation,” said Österholm. He used an example of a customer in Cleveland who used DoseTrack to compare the protocols among their various CT scanners. “Once he started seeing the data, he had an idea that one CT was worse than another,” Österholm shared, and the customer was able to adjust the protocols on the deficient scanner.

As with many current changes in healthcare, new regulatory guidelines are pushing many hospitals to adopt or at least consider dose tracking software.

If asked to identify a particular source of persuasion, most healthcare facilities would likely point to the Joint Commission, which released new regulations for hospital imaging departments this past summer that went into effect Sept. 1, 2016.

Siewko said that he was expecting the Joint Commission to begin requiring inclusion of the patient’s dose history in the EMR, but that it has not happened yet. “What I’ve heard is that it was still too much, too soon to have all this integration,” he told the audience at AHRA.

CT machines are also subject to the XR-29 “Smart Dose” standard, which was released by the Medical Imaging and Technology Alliance (MITA) in 2013 and went into effect Jan. 1, 2016. XR-29 specifies four attributes of CT scanners that must be monitored to help reduce dose, including:

Individual states have even begun contemplating dose reporting laws, though California and Texas are the only states to have passed legislation to date. California’s SB 1237 went into effect in 2012, requiring hospitals and clinics that use CT X-ray systems to record the dose on every CT study produced during the administration of a CT exam; the dose must be verified annually by a medical physicist unless the facility is accredited. A second provision, enacted in 2013, required accreditation by a Centers for Medicare and Medicaid Services (CMS)-recognized organization.

Texas followed suit with its own radiation safety and reporting law in 2013 as an amendment to Title 25 of the Texas Administrative Code. Under the terms (administrated by the Texas Department of State Health Services), facilities that perform fluoroscopically guided interventional procedures and CT exams are required to form radiation protocol committees that must include:

• A licensed physician (or a radiologist or radiation oncologist for CT);

• The radiation safety officer; and

• Other individuals as deemed necessary.

Dose must be recorded for all fluoroscopy and CT exams, with CTDI, dose-length product (DLP) and air kerma values as the specified metrics. It is up to each facility to determine its own acceptable dose threshold and to notify patients if that threshold is exceeded. The Texas law also contains provisions on radiation safety training for all staff that will be performing CT and fluoroscopy procedures.

While regulatory pressure is certainly one driver for improved radiation dose monitoring, many hospitals have an intrinsic interest in improving their performance. Dose registries allow them to compare themselves against other hospitals across the nation using aggregated, anonymized data as benchmarks.

Arguably the most prominent such registry is the American College of Radiology’s Dose Index Registry (DIR), which segments the country into five regions. Participating institutions are given periodic feedback reports comparing their results by body part and exam type to the aggregated results.

The Future of Dose Tracking

At the moment, dose tracking is a retrospective activity — it can really only monitor events as they happen and shed light on them after the fact. Eventually, the goal is to have the technology evolve into a predictive analytics tool — a feat that Siewko and Österholm both say could be accomplished in the very near future. “I would say it’s not more than a year or so away,” Österholm predicted.

Siewko talked about being able to look at a patient’s record prior to administering an exam to see what their current exposure level is at and whether they had another exam recently. This would allow the physician and/or radiologist to decide if the patient can tolerate additional exposure or if an alternative exam might be preferred.

To help better integrate the data with EMRs, many systems already allow use of voice recognition (VR) to enhance data collection. DoseWise, for example, will take the exam dose summary and send it off to the EMR so the data is pre-populated when the physician logs in to the VR software.

Read the article “Regulatory Requirements The Impact on Cardiac Imaging and Dose Management.”

VIDEO: Eye-tracking For Dose Reduction in the Cath Lab

Read the article “States Making A Difference in Radiation Safety.”