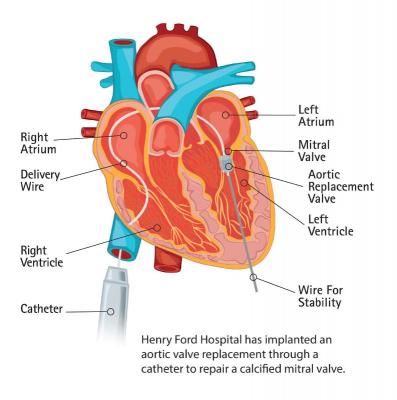 There have been big advances in transcatheter aortic valve replacement (TAVR) technology in recent years and now two such valves on the U.S. market, but there has been little progress toward a transcatheter mitral valve. The U.S. Food and Drug Administration (FDA) cleared the Mitraclip mitral valve leaflet repair system last fall, but for patients requiring a full valve replacement, there is no FDA cleared option. Due to the complexity of the mitral valve anatomy, development of transcatheter treatments for mitral regurgitation has been lacking in comparison to transcatheter aortic valve devices.
This did not stop cardiologists at Henry Ford Hospital in Detroit, who recently used an Edwards Lifesciences Sapien TAVR device to replace a mitral valve that was narrowed with calcium buildup. William O'Neill, M.D., medical director of the Center for Structural Heart Disease at Henry Ford Hospital, estimates this new technique could help thousands of patients a year in the United States.
"The success of this innovative procedure, developed by my team member Dr. Mayra Guerrero, brings new options to physicians for mitral valve repair," O'Neill said in a statement. "Not only did our team implant a different replacement valve than would normally be used in this part of the heart, but we needed to develop a new technique to do it. We were able to implant a different valve, as it was the only way to save the patient."
An FDA-approved trial is being planned at Henry Ford Hospital to further investigate the use of the Sapien valve in the mitral valve position.
The patient, Lee Young, 72, of Detroit, has diabetes and had two previous open-heart surgeries. With calcific mitral stenosis, the narrowed mitral valve of his heart was causing shortness of breath, but he was not a candidate for a third open-heart surgery, so the heart team devised a procedure using a Sapien valve.
The team of specialists modified the route that is usually used for mitral valvuloplasty, a balloon procedure to open narrowed heart valves. The procedure had been attempted on Young, with little success at opening the mitral valve sufficiently. However, the balloon allowed the team to measure the valve annulus to ensure that the new valve would fit before placement.
The route involves threading a catheter from the femoral vein, passing through the right ventricle, into the right atrium and through the septum into the left atrium. The balloon expandable Sapien valve is delivered through the catheter to the mitral valve. A minimally invasive incision allowed a wire to pass through the chest to the mitral valve, providing stability during the placement of the new valve.
Young has been feeling well for the six weeks following his procedure.
Similar Sapien procedures to replace the mitral valve have been performed in Europe since 2011.[1]
European Market Clearance for the Mitral Position

The next generation Edwards Lifesciences Sapien XT is already cleared in Europe for TAVR and for use in the mitral valve. In Febrary 2014, the Sapien XT received an additional European market clearance for use in valve-in-valve procedures, where one device can be implanted over on top of another implanted valve, in both the aortic and mitral valve positions.

In the United States, the Sapien XT valve is not commercially available and is an investigational device being studied as part of the randomized, pivotal PARTNER II Trial. The device is an improved version of Sapien valve.

Canadian-based Neovasc has developed the Tiara device, a dedicated mitral valve replacement device using a self-expanding frame with attached bovine pericardial tissue leaflets mounted inside, similar to a Medtronic CoreValve device. It is delivered through the apex of the heart.

The first-in-human implantation of the Tiara was successfully performed in January at St. Paul’s Hospital in Vancouver. The transapical procedure eliminated mitral regurgitation and significantly improved the patient's heart function without the need for cardiac bypass support or significant paravalvular leak or procedural complications.

The device showed further promise based on preclinical swine study published in the February 2014 issue of JACC: Cardiovascular Interventions. The valves were successfully implanted in 81 percent of the swine (n=29). Unsuccessful implantation was due to improper positioning (n=3), failure of the valve anchors to properly engage during deployment (n=2), and ventricular fibrillation (n=2). None of the valves migrated or embolized. The animals with successful implantations all remained hemodynamically stable throughout the procedure. The authors noted some atrial fibrillation when the valve was being manipulated, but there were no sustained arrhythmias after implantation. Major paravalvular leak was seen only in animals with a improperly sized valves.

Another company, CardiAQ Valve Technologies, is also developing a dedicated transcatheter mitral valve.  Its design uses a foreshortening frame designed to address the specific challenges of the mitral anatomy, and includes numerous proximal and distal anchors connected to the frame. Radial expansion of the frame causes the ends of the anchors on both ends to draw closer together.