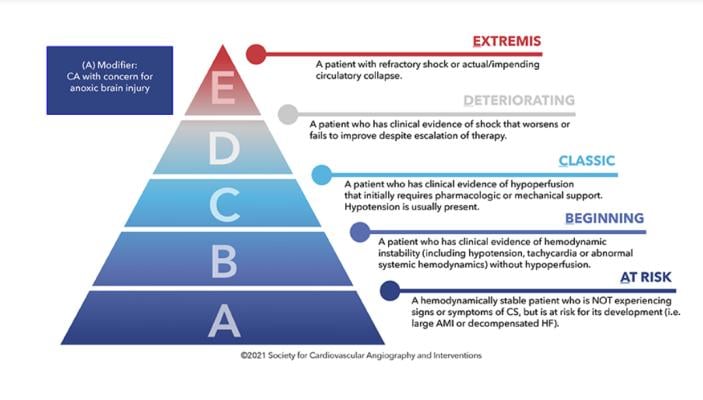 February 2, 2022 — The Society for Cardiovascular Angiography and Interventions (SCAI) released an expert consensus statement updating the SCAI SHOCK classification first released in 2019. The document, “SCAI SHOCK Stages Classification Expert Consensus Update: A Review and Incorporation of Validation Studies” is published in the inaugural issue of the Journal of the Society for Cardiovascular Angiography & Interventions (JSCAI), the official scientific journal of SCAI.[1] It was simultaneously in the Journal of the American College of Cardiology (JACC).

The statement was endorsed by the American College of Cardiology (ACC), American College of Emergency Physicians (ACEP), American Heart Association (AHA), European Society of Cardiology (ESC) Association for Acute Cardiovascular Care (ACVC), Society of Critical Care Medicine (SCCM), International Society for Heart and Lung Transplantation (ISHLT) and the Society of Thoracic Surgeons (STS) in December 2021. Together these organizations represent the diverse areas, and related clinicians and surgeons, where cardiogenic shock presents and is managed.

Cardiogenic shock (CS) is a serious and life-threatening condition that occurs when the heart is unable to pump enough blood to the body’s vital organs and is commonly triggered by heart attack or heart failure. Mortality from cardiogenic shock complicating myocardial infraction (MI) remains high, approaching or exceeding 50%, despite the development of percutaneous mechanical circulatory support technologies and the national standard of emergent angioplasty and stenting.

SCAI developed the original shock classification in 2019 to provide a first-of-its-kind universal standardized vocabulary that would translate across settings and providers from emergency room physicians to critical care physicians, heart failure physicians, interventional cardiologists, and surgeons, as well as those on the frontline such as emergency medical technicians. While the system has been widely adopted for its simple and intuitive framework, and ability to discern gradations of severity of CS for the first time, recent validation studies conducted since 2019 have provided new detailed information to make the definition more powerful.

To produce this update, the writing group reviewed validation studies of the original classification in detail to identify potential areas of refinement. The statement clarifies the precise role of the SCAI SHOCK classification within a more comprehensive 3-axis model incorporating other predictors of mortality, such as etiology and phenotype and nonmodifiable risk factors such as age and frailty, and provides more granularity to the cardiac arrest modifier and the constituent domains of the classification, including physical examination, biochemical, and hemodynamic criteria.

“The new updated definition is easier to use, with tables that have eliminated relatively unnecessary variables and highlighted the more commonly present ones in each shock stage, a more useful cardiac arrest modifier, and a 3-axis model that places the shock stages in context of other variables that need to be considered for the patient in front of you,” said Srihari S. Naidu, M.D., FSCAI, chair of the writing group, cirector of the cardiac catheterization laboratory at Westchester Medical Center, and SCAI Trustee. “Further, we have made it much clearer how patients move up and down the stages if they deteriorate or recover, what these changes do to survival, and how support strategies such as mechanical support devices or vasopressors tie into the various stages.”

Watch a video interview with Naidu from TCT 2021 when he presented the new document — VIDEO: Updates Made to the SCAI Cardiogenic Shock Classifications.

In addition, the cardiac arrest modifier was adjusted based on available data to only include an arrest with concern for anoxic brain injury. According to Timothy D. Henry, M.D., MSCAI, Vice-chair of the document and president of SCAI, “Cardiac Arrest remains an important predictor of mortality in patients with cardiogenic shock, but we clarify the risk is in patients with unclear neurogenic status.”

SCAI and the endorsing societies anticipate the classification to continue to evolve over time as new data accrue, but believe the updated criteria and associated tables and figures will be able to aid in acute clinical care for these patients, inter-hospital and within hospital communication, and in addition should facilitate clinical trials that will ultimately improve mortality in this high risk population.

VIDEO: Tufts Uses a Hemodynamic Support Algorithm to Determine What Devices to Use