TAVR Equivalent to Surgery at Two Years in Low-Risk Patients 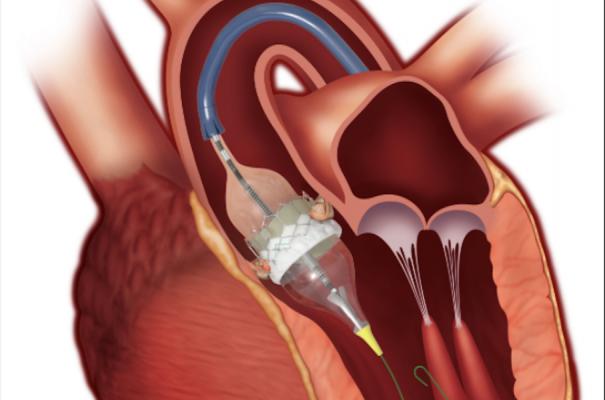 The data show the that patients with severe symptomatic aortic stenosis (AS) at low risk of death from surgery in this trial had a combined risk of death, stroke or rehospitalization at two years, the primary endpoint of the PARTNER 3 trial, that were comparable between the two groups. The trial focused on patients who have a low surgical risk score who are typically younger and who have fewer health problems than higher-risk patients. Last year, researchers reported that TAVR showed superior outcomes compared with surgery at one year among PARTNER 3 participants. The new findings indicate both approaches are equivalent to each other in this low-risk population in terms of outcomes occurring up to two years later. Until recently, this low risk population was excluded from TAVR and referred for surgery, but this and other low-risk TAVR trials are showing TAVR can perform just as well in these patients.

“The one-year outcomes were only the first look at how these patients do, and this is the second look,” said Michael J. Mack, M.D., a cardiothoracic surgeon at Baylor Scott and White Health and the study’s lead presenter. “On the basis of one-year data, many physicians were counseling patients that TAVR outcomes were better than surgery. Now, we see that the outcomes are roughly the same at two years. These data demonstrate that TAVR with the Sapien 3 valve continues to perform well at two years, which gives low surgical risk patients with severe AS the ability to choose a treatment that factors in their individual priorities in consultation with their physician," said Larry Wood, Edwards' corporate vice president, transcatheter aortic valve replacement."

Watch an interview with Mack in the VIDEO: TAVR Performs as Well as Surgery in Low-Risk Patients at 2 Years.

Michael Mack, M.D., presenting the primary endpoint slide of combined death, stroke or rehospitalization in TAVR vs. surgery patients in the PARTNER 3 trial presented at ACC 2020.

PARTNER 3 enrolled 1,000 patients with severe aortic stenosis and a Society of Thoracic Surgeons (STS) risk score of less than 4 percent. All patients had a tricuspid aortic valve. Half of the participants were randomly assigned to undergo TAVR and half underwent surgery. At two years, 11.5 percent of patients receiving TAVR and 17.4 percent of those receiving surgery died, suffered a stroke or were rehospitalized for cardiovascular problems, a difference in the composite primary endpoint that researchers reported as showing non-inferiority, meaning neither treatment was superior to the other.

The two-year outcomes also indicate patients undergoing TAVR had a significantly higher rate of valve thrombosis, the formation of blood clots on the valve, which occurred in 2.7 percent of patients in the TAVR group and 0.7 percent of those who received surgery at two years. However, there was no significant deterioration in the functioning of the valve itself between years one and two in either study group. 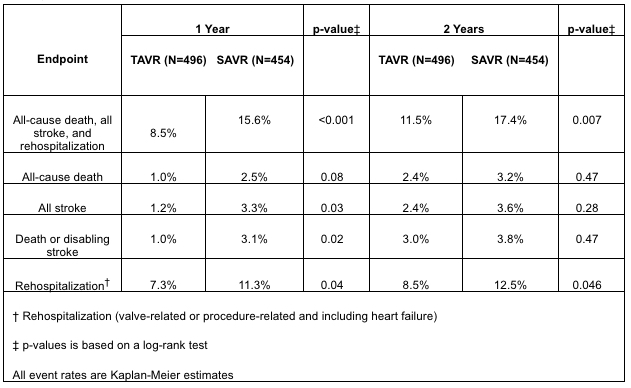 Researchers will continue to track patient outcomes for up to 10 years.

“Longer-term outcomes are particularly important for this patient population because younger, low-risk patients have longer to live with this valve than patients that have been previously studied,” Mack said. “Therefore, the durability of the valve is of utmost importance.”

About 80 percent of patients in the U.S. who need valve replacement for severe aortic stenosis fall into the low-risk category studied in PARTNER 3. While TAVR is appealing to many patients because it is a less invasive procedure than open heart surgery and has a shorter recovery time, the PARTNER 3 trial and other ongoing studies will provide valuable data to help inform shared decision-making among doctors and patients, researchers said.

Mack said that the trial’s findings are limited to patients with severe, symptomatic aortic stenosis with a tricuspid valve and the same inclusion criteria as patients who were enrolled in the study. The trial is also limited by a reduced follow-up rate among patients who received surgery compared with those who underwent TAVR.

The trial was funded by Edwards Lifesciences.

Other Late-breaking TAVR Studies at ACC 2020: