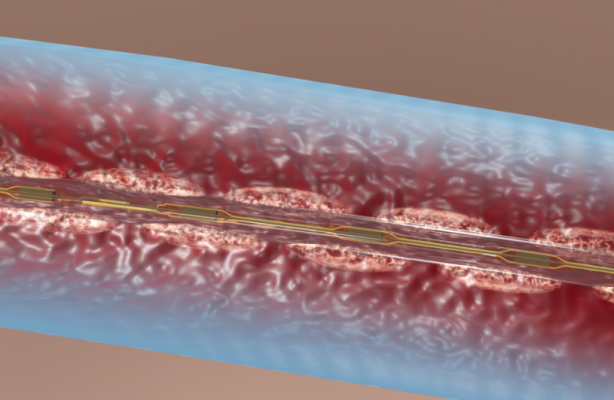 There are few downsides to using tibial venous access to treat deep vein thrombosis (DVT) with catheter-directed thrombolysis. Although it is not the standard approach, perhaps it should be. As an access point to treat, tibial veins offer numerous advantages over the more conventional popliteal approach.

Patient comfort and safety are major benefits of tibial access. Patients are less restricted in their movements and have to worry less about the position of their leg when the sheath is inserted in the ankle rather than behind the knee from popliteal access. The complication rate from pedal access is also lower, with most bleeding events being insignificant and easily controlled with manual pressure at the ankle.

Pedal access also allows for treatment along the entire length of the DVT with catheter-based therapy. An extensive iliofemoral DVT that extends through the popliteal vein and into the tibial vein, for example, would typically require the operator to insert the access sheath into the clot itself using the standard popliteal approach. The veins below the knee would remain thrombosed, restricting blood inflow. With the pedal approach, we can treat the entire length of the clot.

There are no contraindications to using pedal access. One limitation, however, is the size of the access sheath that can be inserted in the tibial vein — no larger than a 6 French sheath. I prefer to use a 5/6 slender glide sheath, which has the inner lumen of a 6 French sheath and the outer diameter of a 5 French sheath. This size sheath is compatible with the EkoSonic Endovascular System (Ekos) catheter, as well as some mechanical thrombectomy devices.

Ekos is my standard treatment option for DVT. Ultrasound accelerates the penetration of lytic drug into the thrombus by thinning and opening up the fibrin mesh of the clot. For extensive DVTs, I believe that more prolonged therapy with tissue plasminogen activator (tPA) — 12 to 24 hours delivered with Ekos — leads to superior thrombus resolution. This is especially true when the inflow is involved.

Obtaining tibial venous access is not difficult, but there is a learning curve, especially for operators who do not already perform many ultrasound-guided procedures. Physicians who perform endovenous ablation procedures or who use ultrasound visualization to obtain access to the common femoral vein and the popliteal vein can quickly become comfortable using the tibial venous access technique.

In my practice, I usually attempt tibial access in nearly all patients, switching to popliteal access in cases where I am unsuccessful cannulating the tibial veins (approximately 15 percent of the time).

How to Obtain Pedal Vascular Access
With the patient in the prone position in the cath lab, I prep the medial ankle for pedal access as well as the knee, should I need bailout popliteal access. We place the ultrasound probe in cross-sectional short access, level with the medial malleolus, which is a good anatomic marker for pedal access. The higher the ultrasound frequency, the easier it is to visualize the posterior tibial artery and the posterior tibial vein. We use a 15-megahertz hockey-stick ultrasound probe for its superb resolution.

I use a 018-inch radial needle intended for radial arterial access, which gives me more control in the small posterior tibial vein. I do not use a syringe on the end. The older method of using a syringe on the back of needle to aspirate blood works for the larger veins--such as the common femoral vein--but does not work well in the tibials, as aspiration will likely collapse these small-caliber veins. Before entering the skin, which has been numbed with lidocaine, I press down with my needle and jiggle it. I look at where the indentation in the skin starts to curve, indicating whether I’m to the right or left of the tibial vein. I want to approach the vein from above, not from either side of it. I also check for compressibility of the vein, to ensure patency.  I then enter the skin at a 45-degree angle, about a finger width distal to the edge of the ultrasound probe.

Once I am about 0.5-inch into the skin, I adjust my ultrasound probe to visualize the tip of my needle before I start interrogating the vein. If you touch the tibial vein too many times, it starts to spasm down and you can not access it, so it is important to reorient your view so that you are clearly seeing the needle puncture the vein.  Once I puncture the vein, I usually intentionally puncture through the back wall, and then slowly pull back on the needle to try to get the back wall of the vein to fall away from the needle.  A flash of blood will come up the needle hub at this point, telling you that you are now in the lumen. At this point I will advance the wire and take a quick look on fluoroscopy to ensure that it is traveling in the right general direction. I will then insert a 5/6 slender glide sheath.

How to Treat DVT
After I insert the sheath, I will take a venogram to define the location of the clot. I will then advance an angled glide wire up the tibial vein, until it reaches the knee.  At this point, I will advance a 0.035 inch support catheter up, remove the wire, and make small injections to define the course of the popliteal vein before advancing the wire and catheter through it. It is important to make sure the wire goes into the true popliteal vein and not into a collateral, as this may leave the patient with a residual occlusive popliteal DVT.  Once I am through the popliteal vein, I stop at the distal femoral vein, remove the wire and do a gentle contrast puff to ensure I’m on the right track.  After advancing the catheter up to the common femoral vein, I remove the wire and take another contrast injection to attempt to define the course of the iliac veins.  I then advance the catheter through the iliac system and then into the inferior vena cava (IVC), taking gentle contrast puffs along the way if there is uncertainty as to where I am. Once in the IVC, I remove the wire and take a proper injection to confirm that I’ve stayed in the lumen of the vessel and to assess for clot in the IVC.

At this point, I introduce the Ekos catheter, leaving the tip about 20 mm into the IVC so that the iliac vein is properly treated with ultrasound and tPA. I give a bolus of 5 to 10 mg tPA, depending on the patient’s clinical history and extent of the clot, and transfer the patient to the ICU with a drip of 0.5 to 1 mg tPA per hour for 12 to 24 hours.

The longest Ekos catheter is 50 cm in length, which is sufficient to treat the iliac and femoral systems combined, but often is not long enough to reach into the tibials. If there is extensive multilevel clot with tibial involvement, after about 18 hours, I will have the ICU staff retract the catheter approximately 12 to 18 cm, which then allows direct tibial treatment. The day after catheter placement, I will bring the patient back for repeat venography, and depending on the findings, I will perform subsequent therapies (iliac stenting, angioplasty, adjunctive mechanical thrombectomy, etc.).

Patient Selection for Catheter-Directed Thrombolysis
The results of the Acute Venous Thrombosis: Thrombus Removal with Adjunctive Catheter-Directed Thrombolysis (ATTRACT) study, presented at the Society of Interventional Radiology (SIR) in March 2017, demonstrated that routine catheter-based therapy is not indicated for DVTs in the femoral popliteal segment. There are some patients with femoral popliteal DVTs who may nonetheless benefit from CDT. I recommend catheter-based therapy to patients who are very active and highly symptomatic, and where there is extensive occlusive clot involving the entire femoral vein. Many of these patients don’t do as well on oral anticoagulation alone, and they are at higher risk for post-thrombotic syndrome (PTS). Unfortunately, we don’t have a good method to predict which patients with femoral popliteal DVTs will develop long-term PTS, but we do know the rate of occurrence is not unsubstantial. Thankfully, we do have a safe treatment option to offer them, and, anecdotally, they feel much better and return to their previous functional status more quickly.

Pedal access is a very safe access modality that results in decreased complications, better patient comfort, and improved clinical results by allowing for complete thrombus treatment of DVTs. There is no reason it should not be the frontline/default access site for interventional treatment of DVTs.

VIDEO: How the Ekos Thrombolytic Technology Works to Dissolve Clots