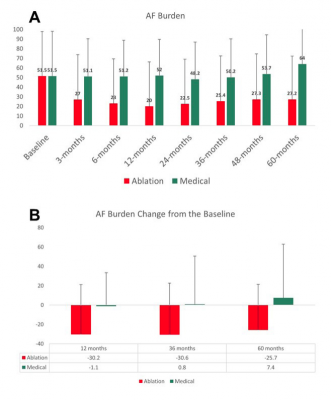 May 18, 2018 — Catheter ablation for atrial fibrillation (AF) in patients with heart failure in the CASTLE-AF Trial was associated with significant improvement in AF burden compared to medical therapy.[1] The study was presented at Heart Rhythm 2018, the Heart Rhythm Society’s 39th Annual Scientific Sessions.

The study for Afib ablation had a much lower rate of death from any cause, or hospitalization for worsening heart failure compared to medical therapy. From the data, researchers proposed the idea that lowering AF burden may be a major driver for lowing co-morbid complications that may result in death.

Researchers randomly assigned patients with symptomatic paroxysmal or persistent atrial fibrillation who had failed antiarrhythmic drug (AAD) treatment, had unacceptable side-effects, or who were unwilling to take AADs. They also had NYHA class II-IV heart failure, left ventricular ejection fraction  equal to or below 35 percent, and an implanted defibrillator. The patients were randomized to undergo either catheter ablation (n=179) or pharmacological treatment (rate or rhythm control) of AF (n=184), in addition to guidelines-based heart failure therapy. After the baseline visit patients were followed for up to five years. AF burden was assessed using the dual chamber or biventricular implantable defibrillators (ICDs) at follow ups.

At baseline, AF burden was similar in both treatment groups. At all subsequent follow-up visits, AF burden was significantly lower in the ablation group than in the medical group (Figure A, p<0.001, Wilcoxon rank sum test).

A trend for improvement of AF burden in the ablation group was also reflected by a significant intra-individual decrease from baseline to 12, 36, and 60 months follow-up visits (Figure B, p<0.001, sign test). In contrast there was no significant change in AF burden in the medical group.