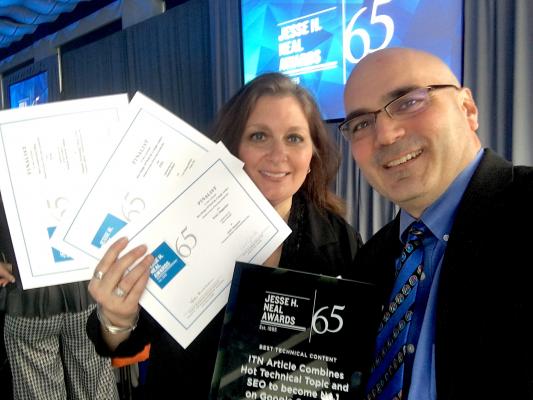 DAIC and ITN Editor Dave Fornell holds the 2019 Neal Award for best technical content with DAIC/ITN Editorial Director Melinda Taschetta-Millane, who is holding the finalist certificates for three other award entries at the award luncheon in New York City in March.

Diagnostic and Interventional Cardiology (DAIC) was recently recognized as a finalist in the Jesse H. Neal Awards for the third year in a row, and DAIC won the award for best technical content for its team coverage of the potential safety issues related to gadolinium-based MRI contrast agents. The Neals are recognized as the Pulitzer Prize of the business press.

The article has had more than 121,000 pageviews since it was posted last year and is the top performing landing page for the ITN website. The award also recognized the use of search engine optimization (SEO) to boost the article ranking on Google searches on this topic and for its links to several staff-produced videos with MRI thought leaders and articles.

DAIC also was a finalist for best work by a single author for Fornell's reporting from the Transcatheter Cardiovascular Therapeutics (TCT) 2018 conference. This included extensive social media posts during the conference, blog posts, articles on new technology developments, a video tour of new technology on the expo floor and interviews with numerous key thought leaders.

ITN was named a finalist in two other Neal categories, including best contributed column series and best work by a single author for ITN and DAIC contributing editor Greg Freiherr.

In 2018, DAIC won the Neal award for best use of social media. DAIC's social media reach on Facebook alone in 2018 and into 2019 has reached more than 100,000 unique users per month. DAIC's Facebook reach from its TCT 2018 coverage was a record 321,000 unique viewers. During the weeks of its medical conference coverage and hospital site visits in 2018, DAIC reached a total of 1.7 million people just on Facebook.

The Neal Awards are sponsored by Connectiv, a division of the Software and Information Industry Association. The winners are selected for exhibiting journalistic enterprise, service to the industry and editorial craftsmanship.

See other awards DAIC has earned.