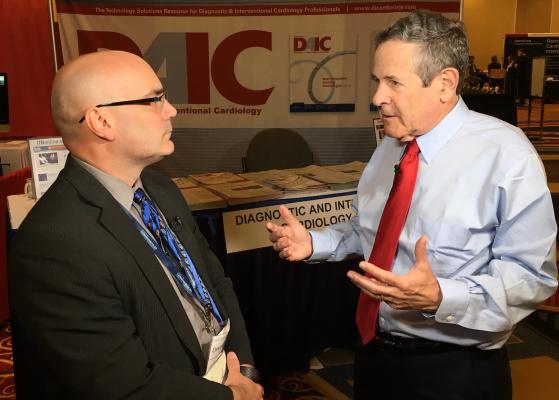 Cardiac computed tomography (CT) pioneer Arthur Agatston, M.D., speaks to DAIC Editor Dave Fornell about the history of coronary artery calcium (CAC) scoring and why it took nearly 30 years to make its way into the guidelines in 2019.

I recently had a great conversation with cardiac computed tomography (CT) pioneer Arthur Agatston, M.D., who is the namesake of the Agatston calcium scoring risk assessment for heart attacks. One of the big topics at the 2019 Society of Cardiovascular Computed Tomography (SCCT) annual meeting in July was the recently updated American Heart Association (AHA) cholesterol management guidelines. The guidelines now encourage the use of coronary artery calcium (CAC) CT exams to better determine a patient's risk of having a coronary event and if they need to go on statins.

SCCT members are intimately knowledgeable on the use of low-dose calcium scoring exams and have long advocated for use of this type of imaging test as a front-line risk assessment. However, without CAC exams being listed as a primary diagnostic test in the guidelines, members felt the test would not see widespread use. However, that changed in the new guidelines, unveiled at the 2018 AHA meeting last November and published in January this year. The result was CT calcium scoring using the Agatston scoring system was discussed in dozens of SCCT sessions this year, as imagers now expect to see much wider use of these exams in the near future.

There was no shortage of key thought leader cardiologists at SCCT who could speak about the value of CAC exams, but I wanted to find someone to interview in a video who would be universally recognized as a key expert and who could offer background on why it took more than 20 years for the exam to finally be added to the AHA guidelines. That was when I ran into Dr. Agatston in the hall between sessions and asked if he had a few minutes for an interview.

His eyes lit up and he said he would love to share his story of how he and colleagues came up with the idea for the calcium scoring system. Agatston explained the history of CT in the 1980s that lead him to move away from being an echocardiographer to become an early cardiac CT expert.

He was heavily influenced by the Framingham Heart Study and the data it produced to enable the identification of cardiac risk factors starting in the 1960s. In the 1980s, the Framingham study outlined risk factors associated with cholesterol. "People with high cholesterol who had a heart attack and those who didn't have heart attacks really had the same levels of cholesterol, so it really didn't differentiate their risks," Agatston said. "And at that time, we also had the first statins, and we really had an opportunity to knock the socks off of LDL cholesterol and really lower it. But the question was who to lower it in. If you gave statins to everyone, you would be treating a lot of people unnecessarily, but if you only gave it to people with the highest cholesterol you would be missing the majority of people who have heart attacks."

In 1988 his hospital, Mount Sinai Medical Center in Miami Beach, purchased an Ultrafast CT scanner. It had the fastest temporal resolution of any CT scanner built at the time, taking images of the heart in a fraction of a second and was able to freeze cardiac motion. The slower, conventional CT systems of the 1980s could not image the heart without motion blur.

"For the first time, we could freeze the motion of the heart and see details. Because the chief of cardiology at Mount Sinai at the time still used fluoroscopy to look at the coronary arteries, I knew about the coronary calcium literature. With this new technology, he said if we can see calcium, and we know it starts years before someone has a heart attack, then we could identify the plaque years before an event and we would know who to treat aggressively with statins and diet," Agatston said. "So we grabbed a few doctors and came up with the idea of throwing them on the scanner, came up with a protocol, and the images were sensational. It was clear you could quantify the calcium and see it easily."

They began a study where they serial-scanned patients with known coronary disease and those without, and it quickly became clear calcium was present in all the patients with known disease or previous heart attacks. "There was a huge difference," Agatston said.

The researchers came up with a new scoring system based on counting up the amount of calcium present to risk stratify patients. They reported their experience and use of the new risk score in 1990 in the Journal of the American College of Cardiology.

"When people talked about the score, they began calling it the Agatston Score because I was named as the first author on our first paper, and the name has withstood the test of time," he explained. "To some people it might have seemed like a crazy hypothesis, but not to me. We knew coronary calcium correlated with the total amount of plaque burden, so we knew it might be able to help predict coronary disease."

Agatston said he is disappointed it has taken nearly 30 years for the score to become part of the guidelines. "I frankly think it should have been included in the guidelines way back at the beginning, but we are very happy that they are coming around. The plaque burden reflected in the calcium score is the single best reflector of cardiac risk. The risk ratios are 10-1, depending on what level of calcium a patient has. No other risk factors even come close. I think the level of evidence needed to be added to the guidelines was at a critical mass long ago."

However, he said one issue with CAC scoring early on was that there was very little access to the Ultrafast CT scanners they used in their study. He said the scanner was about twice as expensive as a traditional CT system at the time, and it was only really needed for cardiac imaging. Most hospitals at the time were not willing to make such a big investment for a test that was not covered by insurance. He said it was not until the proliferation of multi-slice CT scanners and the overall increase in temporal speed for all systems that made calcium scoring readily available at all hospitals just in the past decade.

Today, many hospitals now offer calcium scans at a low cost — between $50-$150 — to screen patients and bring higher-risk patients into that hospital's cardiac care network.

Agatston said the strategy of CAC monitoring is to start scanning men after age 40 and women after age 50, or earlier if there is strong family history of coronary disease. The scans will show any development of plaque. If there is none, Agatston said this is what is known as "the power of zero," meaning the patient has no risk of heart attack and does not need to be treated with statins. He said the exam can be repeated in five years to see if any calcium develops.

"Up to 50 percent of people on statins based on national guidelines really didn't need them because they had a calcium scoring of zero," Agatston said. "But then there were other people who didn't have very high cholesterol, but had a lot of plaque and needed aggressive intervention." He said calcium scoring exams can better direct who should be on statin therapy and diet modification. If you are looking for suggestions on how to modify your diet to help lower cholesterol, Agatson can offer you a few — he is the author the best-selling "South Beach Diet," which he wrote as a result of his deep dive into cholesterol research 30 years ago.

See more of the interview with Agatston in the VIDEO: The History of CT Calcium Scoring.

VIDEO: CT Calcium Scoring to Screen For Who Should Take Statins — Interview with Matthew Budoff, M.D.