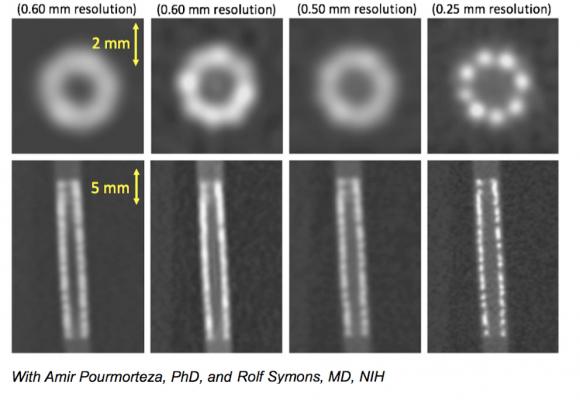 A comparison of what a coronary stent looks like in 0.5 and 0.25 mm CT scanner resolutions.

When the Society of Cardiovascular Computed Tomography (SCCT) was formed in the mid-1990s, its primary goal was to have imagers, both cardiologists and radiologists, collaborate to improve cardiac CT image quality. In the past decade SCCT refocused efforts on gathering clinical trial evidence to show the efficacy and value of coronary CT angiography (CCTA) compared to the standard of care and other competing modalities. In 2017, the society has changed course again with advocacy efforts to take its evidence to policy makers to make a case for why CTA should be a primary cardiac imaging modality and how it fits neatly into the idea of value-based-medicine.

At the SCCT 2017 annual meeting in July, there was a big push for members to become more involved in advocacy efforts and an emphasis on the positive data from a large number of big, randomized controlled trials to date. Society leadership also touted the latest technology advances in cardiac CT, which may offer a paradigm shift in how chest pain patients are assessed in the emergency department (ED).

Watch the related VIDEO “Role of Cardiac CT in Value-based Medicine,” an interview with Leslee Shaw, Ph.D., director of clinical research and professor of medicine at Emory University, Atlanta, and past-president of the Society of Cardiovascular Computed Tomography, who discusses how CCTA offers value in today's cost-conscience environment. I also shot the VIDEO “Clinical Evidence Shows CT Should be the Primary Cardiac Imaging Modality” with current SCCT President Todd Villines, M.D., FACC, FAHA, FSCCT, director of cardiac CT, Georgetown Medical Center. Two of the latest CTA trials are the PICTURE and PROMISE trials. AT SCCT 2017, I shot a VIDEO interview with Matthew Budoff, M.D., FACC, professor of medicine, David Geffen School of Medicine at UCLA, endowed chair of preventive cardiology, Harbor-UCLA Medical Center, who was involved with both of these trials.

Among the most talked about advances is fractional flow reserve computed tomography (FFR-CT), which unlike invasive catheter-based FFR offers a completely noninvasive FFR assessment of not just a coronary segment, but the entire coronary tree. Invasive FFR uses blood flow pressure readings before and after a coronary lesion to determine if a stenosis is hemodynamically significant and requires stenting or other types of revascularization. Traditionally CTA has been great at showing anatomical detail, including the percentage obstruction a lesion presents. But in the cath lab, it is often the case where a significant blockage seen on CT does not greatly impact blood flow. To avoid the need for a diagnostic catheterization for confirmation, FFR-CT uses super-computing computational fluid dynamics to assess a virtual FFR, which studies have shown has an 80 percent correlation with invasive FFR. This may be the key in making CT a true gatekeeper to the cath lab and for EDs to more quickly discharge chest pain patients where coronary blockages can be ruled out.

Watch the VIDEO “Implementation and the Science Behind FFR-CT,” a discussion with James Min, M.D., professor of radiology and medicine and director of the Dalio Institute of Cardiovascular Medicine, Weill Cornell, New York Presbyterian Hospital.

Several vendors are working to develop FFR-CT technology. The latest is Toshiba, which had examples of its prototype software displayed in sessions by physicians who are testing it.

HeartFlow was the first company, and currently the only, to offer FFR technology that is cleared by the U.S. Food and Drug Administration (FDA). Its development program is way ahead of potential competitors, which has led to some CT vendors forming partnerships with Heartflow. Siemens Healthineers announced a partnership in March, and GE Healthcare announced a partnership with HeartFlow just before the SCCT meeting.

However, a major drawback of FFR-CT is its massive computing power requirements, which demands that hospitals send their imaging datasets to HeartFlow’s cloud computing servers in California and wait between four to 24 hours for results. The turnaround times (TAT) have been dropping, accounting to both end users and the company. But, the real goal of this technology is to enable in-house processing on the scanners or the hospital’s own servers with TATs of a couple hours or less to avoid the need to cath a patient, or admit them overnight for a nuclear myocardial perfusion scan in the morning.

Another barrier to FFR-CT adoption is the lack of reimbursement. However, SCCT was proud of the fact that it helped push through a new CPT reimbursement code for FFR-CT, which was among the big news at this year’s meeting.

There were three big technology advancements at SCCT 2017, including:

These are all covered in my VIDEO “Editor's Choice of Most Innovative New Cardiac CT Technology at SCCT 2017.”

The Israeli start-up company Arineta has been working with several CTA luminary physicians for a few years to develop the first dedicated CTA scanner. It incorporates numerous technologies that are specifically aimed at improving coronary CT angiography, without concerns about using the machine for general radiology imaging. The company partnered with GE Healthcare to commercialize the Cardiographe scanner, which gained FDA clearance earlier this year and was displayed for the first time at the American College of Cardiology (ACC) 2017 meeting. GE incorporated many of its latest CT advances for dose reduction, iterative reconstruction, metal artifact reduction and other features from its Revolution CT system. The Cardiographe was built to be very compact so it can fit into a physician’s office, or utilize a smaller room than a standard 64-slice scanner. It offers 140 mm of anatomical coverage to scan the entire heart in one rotation without stitching. Its gantry rotation speed is 0.24 seconds, enabling very fast scans that freeze cardiac motion. Examples of CTA scans on the system presented in sessions were performed at 2 mSv of dose or below. Compare specifications of the Cardiographe to other CT systems on the market with our online Cardiac CT Systems Comparison chart (you will need to create a free login).

Earlier this year, GE Healthcare’s Visipaque (Iodixanol) became the first iodine-based CT contrast agent to gain an official indication for coronary CTA. Until May 2017, all contrast CTAs in the United States were conducted as an off-label use of CT contrast. Read about the FDA approval.

Resolution of tiny structures such as the composition of coronary plaques, stent struts or smaller coronary vessels are difficult to make out on CTA scans even on the best scanners because the current resolution of detectors is limited to 0.5 mm. Toshiba has been developing a new CT detector with an improved resolution down to 0.25 mm. Examples of this were shown in sessions at SCCT. The high resolution will enable more accurate assessment of coronary plaques for a noninvasive, clear identification of vulnerable plaques, the possibility of visualizing broken stent struts, and identification of a specific vendors’ stents based on strut design in vessels as small as 2.5 mm.

For more information on the high-resolution scanner and other new tech, watch the VIDEO “Advances in Cardiac CT Imaging.”  This is an interview with David Bluemke, M.D., Ph.D., FAHA, professor of radiology, University of Wisconsin - Madison, incoming editor of RSNA’s journal Radiology and previously the radiologist in chief of imaging services at the National Institutes of Health (NIH), at SCCT 2017.

In this VIDEO I spoke to outgoing SCCT President Leslee Shaw, Ph.D., at SCCT 2016 about the future direction of cardiac CT.