The chat box in the minutes prior to the beginning of the ACC 2020 virtual meeting's opening session. Hundreds of clinicians said hello from their locations around the globe, keeping with the ACC messaging on the screen.

The novel coronavirus (COVID-19, SARS-CoVo-2) has turned normal life across the world upside down, and that was no different for the pivotal American College of Cardiology (ACC) 2020 annual scientific session. However, through incredibly fast adaptation and technical work, a new virtual ACC meeting was planned and executed in just three weeks. ACC also opened the event up to everyone without registration fees.

All ACC 2020 virtual content is available for free for 90 days at https://virtual.acc.org/.

To ACC's credit, the scaled-back virtual event drew a crowd of 38,006 unique attendees from 157 countries. ACC reported 54 percent of participants were international.

While not the same as a face-to-face meeting, I got the sense that everyone who attended the virtual sessions felt a renewed sense of purpose and unity across medicine and international borders because of the global pandemic. What really struck me were the hundreds of messages in the live chat prior opening session and throughout the meeting, which solidified the sense of unity among clinicians in this global fight.

The platform had a live chat on the side of the screen that constantly scrolled with people saying "hello" from their various locations, including hails from cities and countries around the globe. This chat shows the truly global nature of ACC, and at a time when all clinicians are facing one of the biggest — probably the biggest — challenge they have ever faced in modern medicine. In this time of COVID-19, it also carried the added weight of solidarity among medical professionals, with many chats comments stating things like:

"Hello from China, safe and well."

"My respects and prays for all my colleagues fighting against COVID19 all around the world."

"Good morning from USA! stay safe everyone and God bless."

"All the best to you guys in the U.S. — we are praying for you and all the hard work you guys are doing."

"We dearly wish for your health. Greetings from Indonesia!"

I easily could have spent a hour just reading through these comments and the seeing how closely the world, and cardiovascular medicine, is connected today through that simple chat.

"The challenges we face today are like nothing we have ever seen before," said ACC President Richard Kovacs, M.D. "But, I can't thing of any other group of people I would rather be on the front lines with," he told ACC attendees in the opening session of the virtual ACC meeting. He noted his mom was born in 1918 when the last major world pandemic hit, and his daughter is an epidemiologist at the Centers for Disease Control and Prevention (CDC).

"Topics like telehealth, global accountability were scheduled as sessions, not as the new normal. International disease and pandemics clearing know no borders, but we are stronger together. Teamwork and collaboration are the name of the game in COVID-19," Kovacs said. He noted clinical teams are now working to cover all shifts and clinicians are coming out of retirement to help with the sudden influx of critically ill patients.

ACC leaders and the presenters for each late-breaking study and session were speaking via video links from their homes or offices. The backgrounds behind these speakers showed bookcases, fireplaces, staircases to upstairs bedrooms, family photos on the walls, personal book collections and knicknacks. These are very personal places, and not the usual high-impact, dramatic, well groomed stage that usually punctuates the choreographed ACC annual meetings and main tent presentations. Some of the presenters are working from home for the duration, since they are considered part of the high-risk category of people over the age of 60. Others were in their offices at the hospital, some in scrubs or white coats typical of their day-to-day work attire, not the well dressed, impeccable attire of expensive suits that usually are a hallmark of ACC. Seeing all these things, sometimes even with suboptimal video from unstable internet connections, made ACC much more real-life. It was gritty, more like a reality TV show — a show in which we are all playing a part. 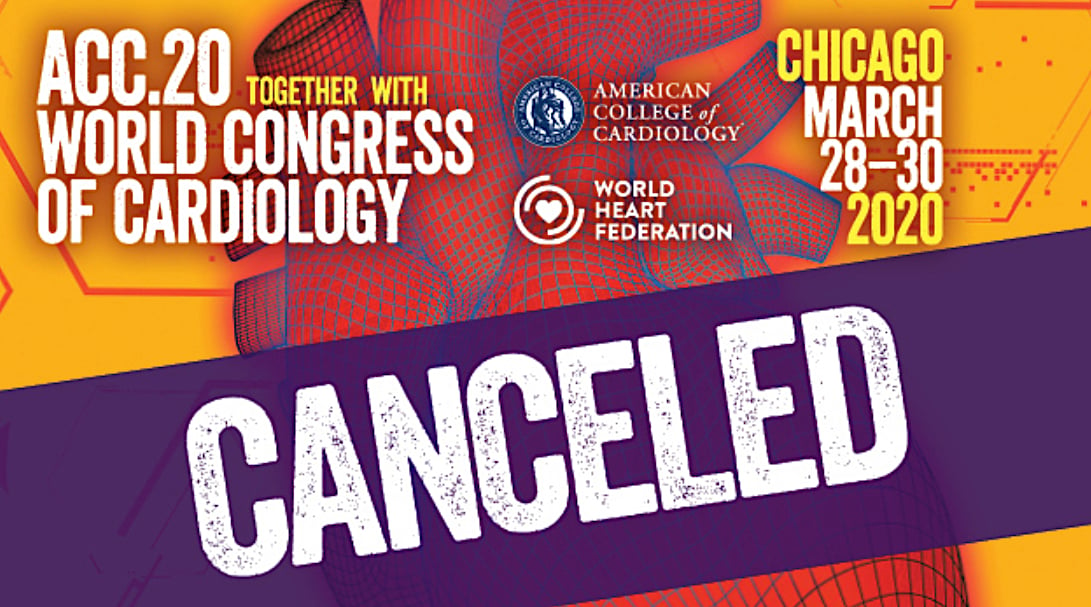 ACC originally was cancelled its in-person meeting amid a landslide of doctors pulling out of the meeting, as one-by-one like dominoes falling hospitals across the world starting putting travel restrictions on their doctors and staff. These medical facilities wanted to keep their staff closer to home in case COVID-19 hit their areas hard, as indeed it has.

There was shock by many that ACC cancelled its meeting, but in hindsight now, just three weeks later, it was clearly the right and only decision. ACC would have been cancelled regardless by the City of Chicago and new state rules for public gatherings put in place just days after ACC announced the cancellation. 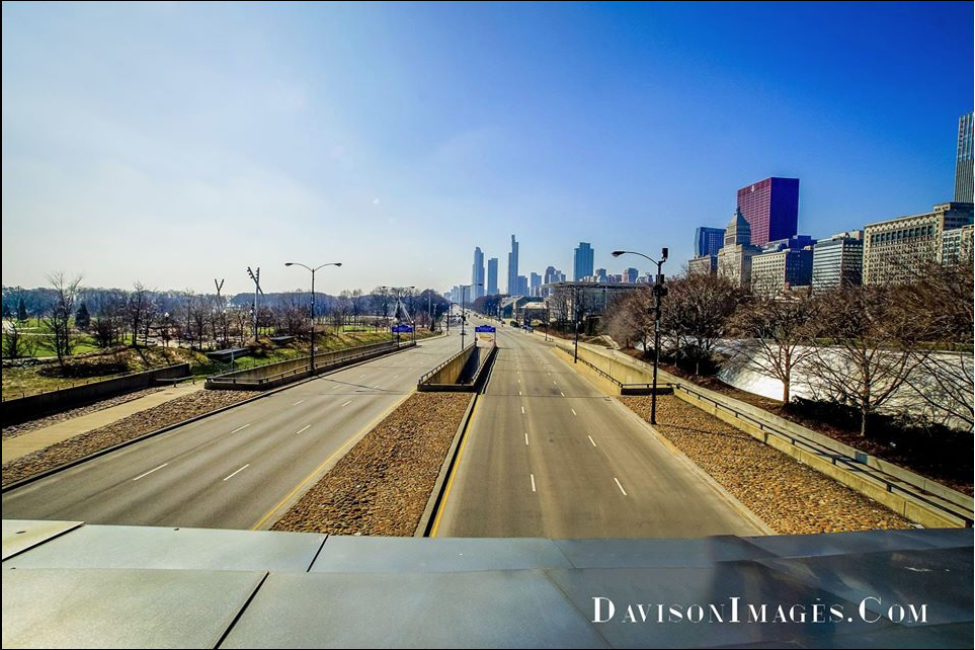 Chicago was going to be the host city for ACC 2020, but the streets the week of ACC looked more like a set of a post-apocalyptic movie set, where everyone was gone. No rush hour traffic downtown. Nothing open. Almost no one is on the streets in downtown Chicago. There are very few car on the streets. Everything in Chicago, and the rest of Illinois, was shut down two weeks earlier. Bars closed, restaurants only allowing food pickups, schools closed, business closed or employees working from home, empty shelves in grocery stores due to people panicking and buying what they can in case travel restricts get tighter, etc. The quarantine period in Illinois was just extended the week of ACC through April 30, and unless numbers begin to drop, it is likely things will be shut down through May as well.

The photo above shows Chicago's Lake Shore Drive empty Wednesday, March 25, due to COVID-19 and the city shutting down for containment efforts. Photo by Tom George Davidson.

It is amazing how fast things can change in the current situation. 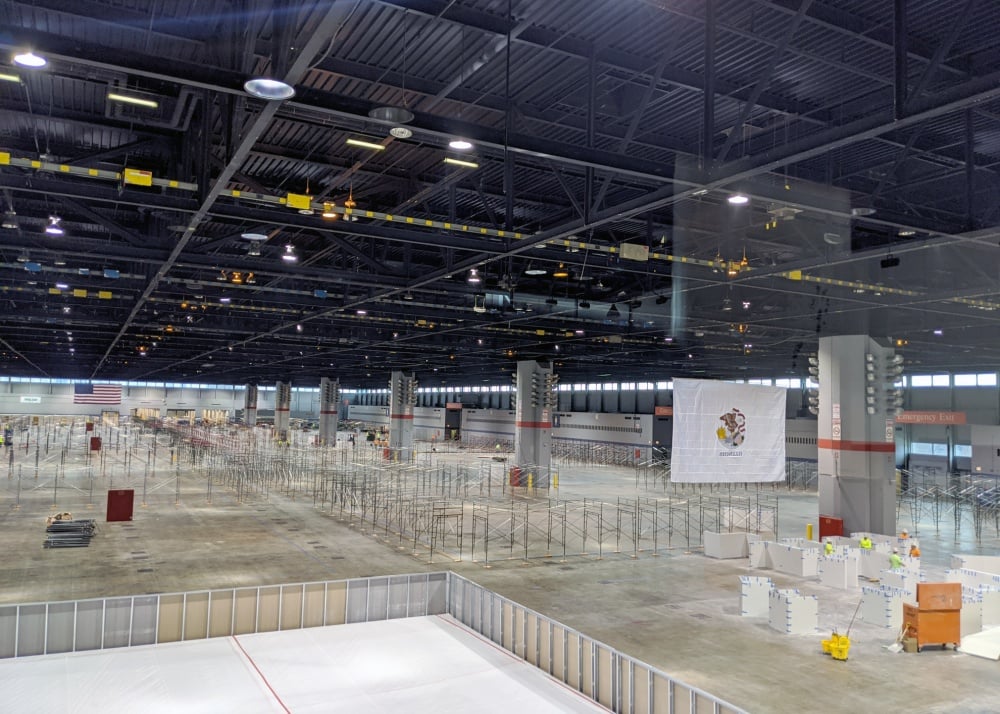 As the virtual ACC conference kicked off Saturday, the McCormick Place convention center where ACC was supposed to be held was being turned into a 3,000 bed overflow COVID-19 hospital for the expected surge in new cases. At the time ACC was cancelled in early March, the state of Illinois had less than 20 confirmed cases of COVID-19. As of today, three weeks later, that number has risen to more than 6,000, and still rising rapidly.

The photo shows construction of a COVID-19 Alternate Care Facility at the McCormick Place Chicago convention center April 4. This Hall was supposed to be where the ACC main tent sessions were to be held if ACC in Chicago had not been cancelled. Photo by Susan Blair, U.S. Army Corps of Engineers, Chicago District.

I got the sense that the virtual ACC meeting was a victory against COVID-19, because it showed we can adapt and move on in adversity, despite what nature throws at us. During the opening session, that chat was refreshing. While the point of the meeting was to deliver the latest science, I think for many at that opening session it was enough that they were still able to come together and stand united as one in the face of adversity. The science was nice and I usually have a lot to say about the late-breakers and new technology at these meetings, but this was by far my biggest key takeaway from ACC 2020.

Find articles and videos on how COVID-19 is impacting cardiology