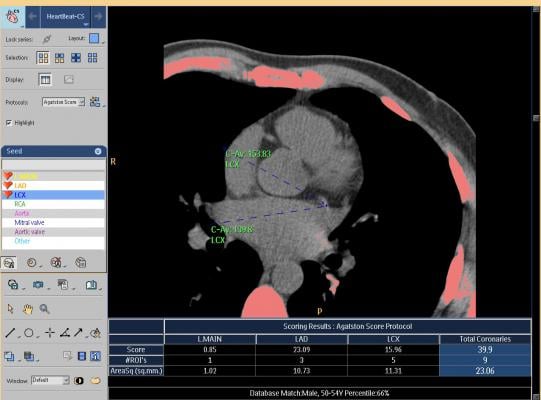 A report on the study, conducted by researchers at the Johns Hopkins University School of Medicine and elsewhere, is published online on March 9 in the Journal of the American College of Cardiology: Cardiovascular Imaging.

“Plaque in the arteries is the result of cumulative damage and inflammation, and vulnerability to injury and chronic inflammation likely contributes to diseases like cancer, kidney and lung diseases, as well as cardiovascular disease. So it makes sense that the coronary calcium score — a measure of arterial aging — is predictive of noncardiovascular diseases too,” said Michael Blaha, M.D., MPH, director of clinical research for the Ciccarone Center for the Prevention of Heart Disease and assistant professor of medicine at the Johns Hopkins University School of Medicine. “The reason the coronary calcium score may work so well at identifying vulnerability to a variety of chronic diseases is because it’s a direct measurement of the cumulative effect of all risk factors, rather than a consideration of a single risk factor, like obesity, smoking or high blood pressure.”

Blaha and his colleagues caution, however, that theirs was an “association study” that didn’t look for, measure or find a cause-and-effect relationship between coronary calcium levels and noncardiovascular diseases.

Heart CT scans quickly and automatically measure how much and how dense the levels of the mineral are in the blood vessels that nourish the heart’s arteries. Coronary artery calcium is a well-known predictor of coronary heart disease and stroke risk. The risk of these diseases is low when the calcium score is zero, and that risk balloons nearly fivefold when the score is above 400. For the current study, the research team, composed of investigators from Johns Hopkins; the University of California, Los Angeles; Henry Ford Hospital in Detroit; the Minneapolis Heart Institute; and Columbia University, used data from six centers that contributed subjects to the Multi-Ethnic Study of Atherosclerosis, or MESA.

The 6,814 participants were of white, African-American, Hispanic and Chinese descent, ages 45 to 84, and free of cardiovascular disease at the time of an initial heart CT scan and coronary calcium score calculation.

Over 10 years, until 2012, participants underwent follow-up visits at least once a year to review new diagnoses through hospital and death records.

Of the 710 new cancer diagnoses, over two-thirds (68 percent) occurred in participants with detectable calcium in their coronary arteries. According to the investigators, after adjusting for other factors, individuals with the highest calcium scores greater than 400 had a 53 percent increased risk of developing cancer during follow-up.

At the completion of the study, 161 participants were diagnosed with COPD. Those people with high coronary calcium scores over 400 were 2.7 times more likely to have COPD than those with no detectable calcium.

The researchers reported borderline associations between coronary artery calcium scores and dementia and hip fracture, and no association with blood clots or pneumonia after controlling for age, sex, race, income and health insurance status. The data for dementia and hip fractures are considered promising but may be inconclusive due to too few participants diagnosed with each disease.

The researchers also caution that because hospital record billing codes were used to determine the diagnoses they used in their study, milder cases of disease not requiring hospitalization could have been overlooked. However, this would have made it less likely to see the associations found in this study.

Blaha and his team also published an analysis of MESA participant data last year that shed light on the biology of “healthy agers” with persistent coronary calcium scores of zero after 10 years of scanning. These people appear to have protection from both heart disease and noncardiovascular diseases. Those results were published in the December 2015 issue of the Journal of the American College of Cardiology: Cardiovascular Imaging.

This study was funded by grants from the National Heart, Lung, and Blood Institute.