A new study confirms what many suspected, that PCR testing even 8 days after infection shows 20 percent false negatives 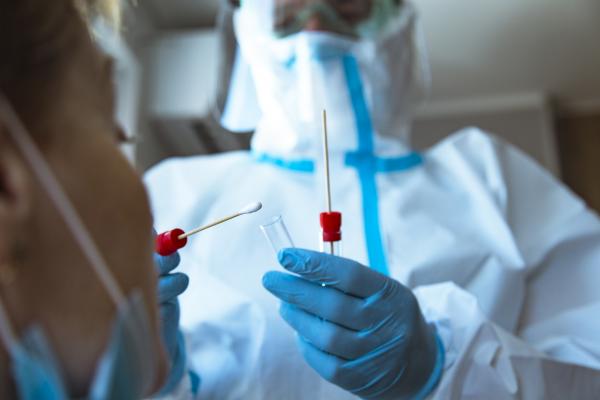 A PCR genetic test nasal swab being taken from a patient to test if they are infected with COVID-19. While used as the primary test to diagnose coronavirus, up to 20 percent of patients will test negative even eight days after infection. Getty Images

June 10, 2020 — In a new study, Johns Hopkins researchers found that testing people for SARS-CoV-2 (COVID-19) too early in the course of infection is likely to result in a false negative test, even though they may eventually test positive for the virus.[1] This is important to understand since many hospitals are using these COVID tests to screen patients before imaging exams, diagnostic testing or procedures.

The report found even a week after infection, one in five people who had the virus had a negative test result. The findings was published in the May 13 issue of Annals of Internal Medicine.

“A negative test, whether or not a person has symptoms, doesn’t guarantee that they aren’t infected by the virus,” said Lauren Kucirka, M.D., Ph.D., M.Sc., obstetrics and gynecology resident at Johns Hopkins Medicine. “How we respond to, and interpret, a negative test is very important because we place others at risk when we assume the test is perfect. However, those infected with the virus are still able to potentially spread the virus.”

Kucirka said patients who have a high-risk exposure should be treated as if they are infected, particularly if they have symptoms consistent with COVID-19. This means communicating with patients about the tests’ shortcomings. One of several ways to assess for the presence of SARS-CoV-2 infection is a method called reverse transcriptase polymerase chain reaction (RT-PCR). These tests rapidly make copies of and detect the virus’s genetic material. However, as shown in tests for other viruses such as influenza, if a swab misses collecting cells infected with the virus, or if virus levels are very low early during the infection, some RT-PCR tests can produce negative results. Since the tests return relatively rapid results, they have been widely used among high-risk populations such as nursing home residents, hospitalized patients and healthcare workers. Previous studies have shown or suggested false negatives in these populations.

For the new analysis, Johns Hopkins Medicine researchers reviewed RT-PCR test data from seven prior studies, including two preprints and five peer-reviewed articles. The studies covered a combined total of 1,330 respiratory swab samples from a variety of subjects including hospitalized patients and those identified via contact tracing in an outpatient setting.

Using RT-PCR test results, along with reported time of exposure to the virus or time of onset of measurable symptoms such as fever, cough and breathing problems, the researchers calculated the probability that someone infected with SARS-CoV-2 would have a negative test result when they had the virus infection. In the published studies, healthcare providers collected nasal and throat samples ­from patients and noted the time of virus exposure or symptom onset and sample collection.

From this data, the Johns Hopkins researchers calculated daily false-negative rates, and have made their statistical code and data publicly available so results can be updated as more data are published.

How Long Does it Take for COVID-19 To Show Up in Testing?

The researchers estimated that those tested with SARS-CoV-2 in the four days after infection were 67 percent more likely to test negative, even if they had the virus. When the average patient began displaying symptoms of the virus, the false-negative rate was 38 percent. The test performed best eight days after infection (on average, three days after symptom onset), but even then had a false negative rate of 20 percent, meaning one in five people who had the virus had a negative test result.

“We are using these tests to rule out COVID-19, and basing decisions about what steps we take to prevent onward transmission, such as selection of personal protective equipment for healthcare workers,” Kucirka explained. “As we develop strategies to reopen services, businesses and other venues that rely on testing and contact tracing, it is important to understand the limitations of these tests.”

Ongoing efforts to improve tests and better understand their performance in a variety of contexts will be critical as more people are infected with the virus and more testing is required. The sooner people can be accurately tested and isolated from others, the better we can control the spread of the virus, the researchers said.

COVID PCR Tests May be Negative Despite Incubation Period Being Reached

Another John Hopkins study in March found the average incubation period for COVID-19 was approximately five days.[2] This was originally used as a guide by some in developing quarantine guidelines. However, this new study shows that test COVID PCR test results are not reliable for a firm diagnosis until well after a week of infection.

Funding for the study was provided by the National Institute of Allergy and Infectious Diseases (R01AI135115 and T32DA007292), the Johns Hopkins Health System and the U.S. Centers for Disease Control and Prevention (NU2GGH002000).

The U.S. Food and Drug Administration (FDA) issued a Letter to Clinical Laboratory Staff and Health Care Providers alerting them of an increased risk of a false positive result with BD SARS-CoV-2 Reagents for the BD Max System test. In one study, the manufacturer found approximately three percent (3%) of results were false positive results. The FDA is working with Becton, Dickinson and Company (BD) to resolve this issue and will continue to keep clinical laboratory staff, health care providers, manufacturers, and the public informed for new or additional information.