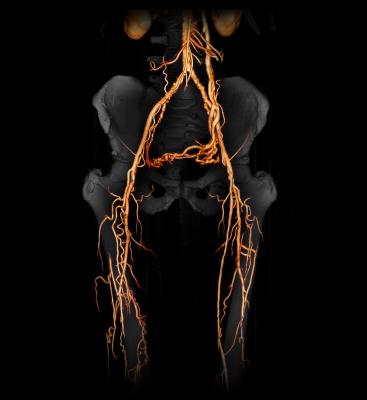 March 23, 2018 — Patients with foot ulcers or gangrene who received the experimental drug JVS-100 did not show evidence of faster wound healing, compared with those receiving a placebo, in a study presented at the American College of Cardiology’s 67th Annual Scientific Session, March 10-12 in Orlando, Fla.

The study focused on patients with a condition known as critical limb ischemia, which occurs when the arteries that supply blood to the limbs (typically the legs) become stiffened or blocked. A lack of adequate blood flow to the extremities can lead to painful skin lesions or gangrene sores that persist for months or years.

JVS-100 is a biologic therapy that delivers DNA that encodes proteins involved in the production of blood vessels. Its developers had hoped it would stimulate the growth of vessels to provide more routes for blood to reach blood-starved tissue.

The study, which enrolled 109 patients at 25 centers in the United States, assessed whether JVS-100 helped wounds heal when used in concert with revascularization. In the trial, only about a quarter of patients’ wounds had healed completely three months after undergoing revascularization. That proportion was the same for patients who received the experimental drug and those who received a placebo.

“These results clearly highlight the need for identifying additional therapies, or perhaps combinations of therapies, that could help these patients,” said Mehdi Shishehbor, DO, Ph.D., MPH, director of the cardiovascular interventional center at University Hospitals Harrington Heart and Vascular Institute and the study’s lead author. “The fact that only about 25 percent of these patients had healed at three months, despite being in a very rigorous, highly monitored environment both from the standpoint of wound healing and revascularization, makes us even more motivated to continue to seek additional therapies.”

Patients were randomly assigned to receive either JVS-100 or a placebo in a series of two injections, one within 12 days of their revascularization procedure and one three months later. Half of those receiving JVS-100 were given a higher dose of the experimental drug and half were given a lower dose. Neither the patients nor those administering the injections knew which patients received the drug and which received the placebo.

All patients had undergone revascularization for critical limb ischemia but showed poor blood flow to the toe (scoring 0.51 or less with on toe brachial index, or TBI) after the procedure. Most of the patients suffered from multiple illnesses; 90 percent had diabetes and 7 percent were on dialysis. Diabetes can speed up the accumulation of deposits in arteries, including smaller ones, which in turn increases the risk of critical limb ischemia and amputation.

The researchers tracked wound healing as well as rates of death, amputation and major adverse limb events (MALE), a combined endpoint that includes major amputation, bypass or balloon revascularization in the affected limb. In addition to low rates of wound healing, the researchers found high rates of adverse events in both groups. Three months after the initial injection, 15 percent of patients in the placebo group and 20 percent of patients in the treatment group had undergone amputation. The overall MALE rate was 9 percent in the placebo group and 14 percent in the treatment group. Additionally, 21 percent of those in the placebo group and 30 percent of those in the treatment group saw their wounds grow by 25 percent or more during the three-month follow-up. Differences in the rates of these outcomes were not statistically significant between groups.

A unique aspect of the study, according to Shishehbor, was its close assessment of blood flow in the smaller arteries at baseline and during follow-up using TBI. Despite undergoing extensive revascularization to improve blood flow, none of the patients achieved a normal TBI (greater than 0.71) after revascularization or at three months. There was no significant difference in TBI at three months between the treatment and placebo groups.

The researchers will continue to track patient outcomes for at least 12 months.

“We are very much looking forward to the six-month data,” Shishehbor said. “Based on those results, we will determine whether we will investigate this biologic therapy in a longer study, or perhaps consider studying a combination therapy that involves more than one biologic therapy.”

The study was funded by Juventas, maker of JVS-100.