April, 14, 2021 – Elixir Medical recently announced the first patient was treated in the BIOADAPTOR randomized controlled trial (RCT) of the DynamX Coronary Bioadaptor System, the first drug-eluting coronary stent that adapts to vessel physiology. It uses a drug-eluting bioresorbable polymer coating that dissolves after three months, which disconnects joints between segments of the metallic stent, allowing it to articulate with vessel movement and its natural shape.

The first patient in the study was treated in January by Shigeru Saito, M.D., director of the cardiology and catheterization laboratory at Shonan Kamakura General Hospital in Kanagawa, Japan and principal investigator of the study.

The BIOADAPTOR RCT is a multicenter, randomized single-blind study encompassing 444 patients in Japan, Germany and select other sites treated with the DynamX Bioadaptor in a 1:1 randomization to Medtronic Resolute Onyx, a leading drug-eluting stent (DES). The primary endpoint of the study is target lesion failure at one year. Secondary endpoints include measures of the implants’ ability to accommodate vessel growth from disease progression and restore artery pulsatility in an imaging subset, as well as other major cardiovascular events.

The DynamX Bioadaptor is a metal implant with a drug-eluting bioresorbable polymer coating that supports the coronary artery during healing, with radial strength similar to DES. Over six months, the polymer coating dissolves, uncaging the bioadaptor and freeing the artery to move with the natural expansion and contraction of the artery, unlike DES. This has been shown to (a) maintain the ability for positive adaptive remodeling, (b) restore vessel function, and (c) allow for the vessel’s return towards baseline angulation.

“We are enthusiastic about leading this trial studying an important innovation in percutaneous coronary interventions, the bioadaptor,“ Saito said. “By doing this clinical trial, we can scientifically test the safety and efficacy of this bioadaptor in a clinical situation for patients.”

The DynamX Coronary Bioadaptor System uses a metallic stent design made of segments that fit together at joints. These are held together to create a single stent during delivery, but as the bioresobable polymer coating dissolves, it allows the stent segments to come apart inside the vessel wall to allow the segments to move independently for more natural vessel movement and shape.

The bioadaptor is designed to address the two to three percent major adverse cardiac event rate that occur with drug-eluting stents each year without plateau.[1,2,3] The rigid design of a DES constrains, or “cages,” natural artery movement, restricting its natural ability to accommodate disease progression. This has been associated with major adverse cardiac events (MACE).4 Long-term studies have shown adverse event rates associated with DES of 20 percent at five years and 40 to 50 percent at 10 years.[2] Clinical studies have demonstrated that a DES prevents positive adaptive remodeling,[5] inhibits vessel compliance and dilation in response to the body’s changing blood flow needs,[6,7] and causes vessel straightening, which has been associated with increased MACE.[8]

Studies have shown that the DynamX Bioadaptor improves vessel function in several ways. It enables the vessel to accommodate disease progression and achieve positive adaptive remodeling by increasing vessel area and maintaining lumen diameter, which preserves blood flow to the heart. DynamX restores vessel function and allows for normal vessel pulsatility and motion, enabling it to provide more blood flow in response to the body’s needs during physical activity. It also allows the vessel to return to baseline angulation, which may reduce adverse events.

“The DynamX Bioadaptor RCT is an important contribution to demonstrating the significant benefits our device offers for patients,” said Motasim Sirhan, Elixir Medical CEO. “Elixir’s DynamX Bioadaptor is the only technology designed to accommodate disease progression, improve blood flow to the heart and reduce stresses on the artery. By creating a coronary artery device that allows the restoration of normal vessel function, we expect to demonstrate safety and efficacy with a reduction in clinical events.” 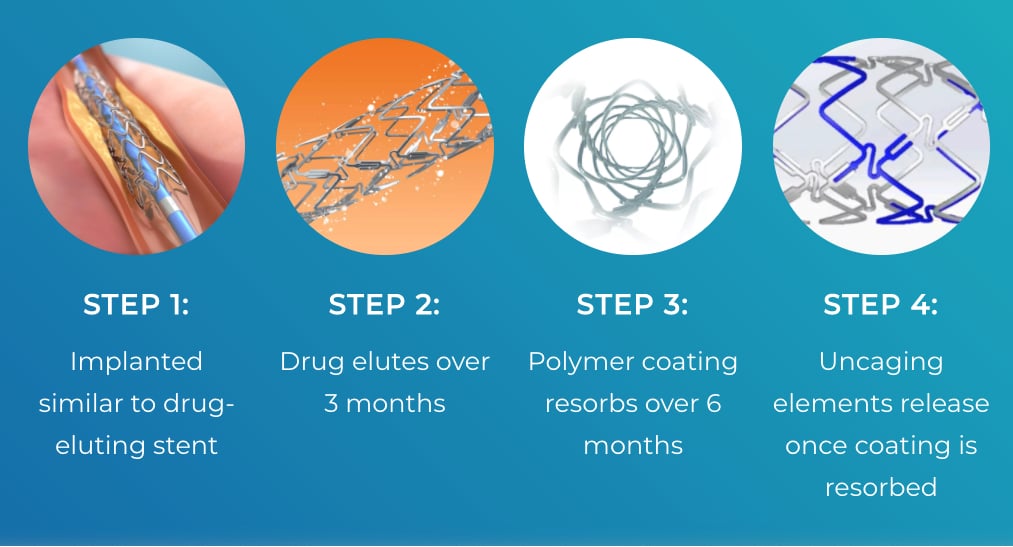 Elixir Medical Corporation, a privately-funded company based in Milpitas, California, develops next-generation platforms to treat coronary artery disease that are designed to restore the adaptive remodeling and pulsatile motion capabilities of the blood vessel. The company’s mission is to transform the care of patients with heart and vascular disease through innovation.

The DynamX Coronary Bioadaptor System has European CE mark approval. Not available for sale in the USA.