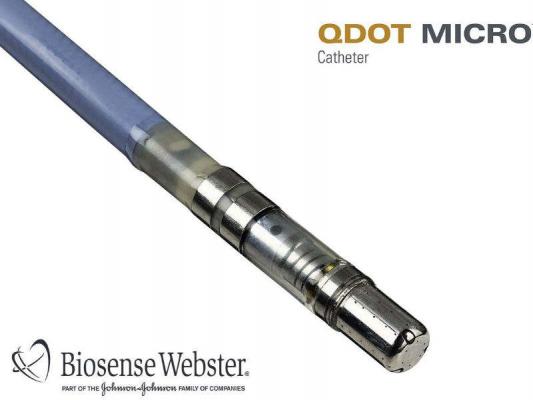 February 4, 2019 – Biosense Webster has enrolled and treated the first patient in its U.S. Investigational Device Exemption (IDE) study evaluating the company’s QDot Micro radiofrequency (RF) ablation catheter in the treatment of symptomatic drug-refractory paroxysmal atrial fibrillation (AF). The first AF patient was treated at NYU Langone Health’s Heart Rhythm Center in New York City, one of up to 30 centers participating in the study that will enroll up to 185 patients throughout the U.S.

“The delivery of 90 watts of RF power in a short, four-second ablation session is a significant advancement in the treatment of paroxysmal atrial fibrillation,” said Larry A. Chinitz, M.D., electrophysiologist and director of the Heart Rhythm Center at NYU Langone Health, who treated the first patient in the study.+ “We’re eager to see whether this new technology helps to reduce procedure time and improve clinical outcomes.”

Current catheter technologies typically deliver RF ablation at an average power level between 20 and 40 watts and for a duration of 20 to 40 seconds.[1] The QDot Micro RF Ablation Catheter, which is only available for investigational use in the United States, is the first to deliver 90 watts of RF power in a short, four-second temperature-controlled session. Its temperature control and micro-electrode technology is specifically designed to provide more efficient and consistent lesion creation with advanced diagnostics.

An estimated 33 million people worldwide have been diagnosed with AF and its prevalence is projected to increase significantly as the population ages.[2] Approximately 70 percent of patients with AF are between the ages of 65 and 85.[3]