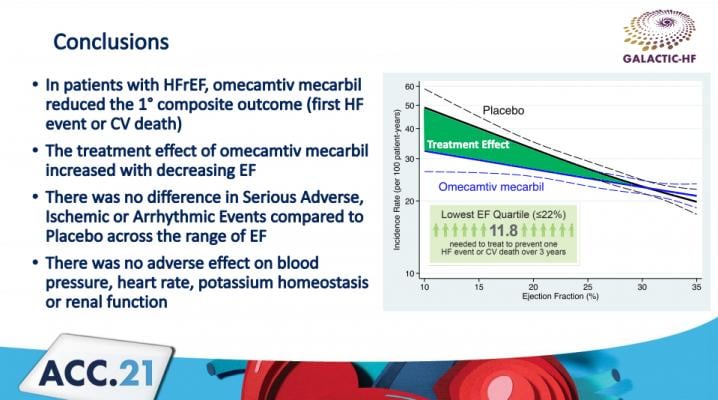 May 18, 2021 — The experimental heart failure drug omecamtiv mecarbil reduced heart failure hospitalizations by a greater margin among patients with more severely reduced ejection fraction compared with those who had moderately reduced ejection fraction. This was the finding of the GALACTIC-HF trial presented at the American College of Cardiology (ACC) 2021 scientific session.

Omecamtiv mecarbil works by improving the ability for heart muscle cells to contract and operates through a different biological pathway than any of the current heart failure medications. The research is an extended analysis of data from GALACTIC-HF, a trial involving more than 8,200 participants that found omecamtiv mecarbil significantly improved outcomes in terms of a composite of cardiovascular death or heart failure events among patients with heart failure with reduced ejection fraction. The new analysis focused on how patient outcomes varied based on the level of severity of their reduced ejection fraction.

“This is a drug that will potentially help the very group of patients that are most difficult to care for,” said John R. Teerlink, M.D., a cardiologist at the University of California, San Francisco and the San Francisco VA Medical Center, and the study’s lead author. “While the results from GALACTIC-HF show omecamtiv mecarbil brought improvements overall, these new findings point to a group of patients with more severe heart failure in whom there is even greater benefit.”

Heart failure is a condition in which the heart becomes too weak to pump blood effectively to the rest of the body. The trial investigated omecamtiv mecarbil in patients with heart failure with an ejection fraction of less than or equal to 35%. Ejection fraction is a measure of the amount of oxygen-rich blood that the heart pushes out with each heartbeat (50-70% is considered normal).

As previously reported, the GALACTIC-HF trial met its primary endpoint, which was a composite of time to first heart failure event or death due to cardiovascular causes, and the benefit was predominantly driven by reductions in heart failure events, with no significant improvement in the rate of death from cardiovascular causes compared to placebo. An additional benefit, according to Teerlink, is that when compared with other commonly used heart failure medications, omecamtiv mecarbil did not adversely affect blood pressure, heart rate, potassium concentrations or renal function, even when used alongside current heart failure medications. In addition, there was no increase in cardiac ischemic or ventricular arrhythmic events.

“The good news is omecamtiv mecarbil can be added on to a patient’s treatment regimen at any time, because it doesn’t interact with any of the commonly used heart failure therapies in terms of adverse effects,” Teerlink said. “While it doesn’t provide a benefit in terms of reducing cardiovascular death, it can provide its benefit in terms of reducing heart failure hospitalizations virtually anywhere in the treatment process.”

In the new analysis, researchers found that the relative and absolute benefits from omecamtiv mecarbil significantly improved with progressively lower ejection fraction. Patients in the two lowest quartiles in terms of ejection fraction had a 15-17% reduction in the risk of dying from cardiovascular causes or being hospitalized with heart failure, compared to 8% for the entire patient population. In the lowest quartile, the absolute risk reduction was 7.4 per 100 patient years, meaning that treating fewer than 12 patients with omecamtiv mecarbil would result in preventing one cardiovascular death or heart failure hospitalization.

“That’s a very important and clinically meaningful finding, particularly given that patients with low ejection fraction tend to be at the highest risk and the hardest to treat,” Teerlink said.

The study did not show a clear benefit of omecamtiv mecarbil among patients with ejection fraction higher than about 30%. The researchers plan to further investigate this finding to determine whether a subset of these patients may benefit from the therapy. Additional studies are underway to examine whether having atrial fibrillation or other conditions in addition to heart failure may affect outcomes from the drug.

This study was simultaneously published online in the Journal of the American College of Cardiology at the time of presentation.[2]

The study was funded by Amgen, Cytokinetics Inc. and Servier.