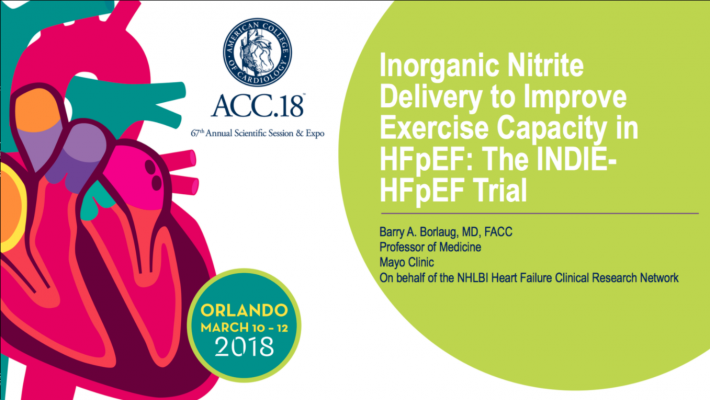 March 20, 2018 — Four weeks of treatment with a novel inhaled medication failed to improve exercise capacity, daily activity levels, severity of symptoms or quality of life in patients with a type of heart failure for which no effective treatment options currently exist, according to research presented at the American College of Cardiology’s 67th Annual Scientific Session.

The first multicenter trial of an inhaled therapy for heart failure fell short of meeting either its primary or secondary endpoints, said Barry A. Borlaug, M.D., professor of medicine at Mayo Clinic in Rochester, Minnesota, and principal investigator for the study.

The trial involved patients who have heart failure with preserved ejection fraction (HFpEF). Of the approximately 6 million Americans with heart failure, roughly half have HFpEF. As the population ages, the number of people with this type of heart failure is expected to increase. To date, no treatment has conclusively shown to improve outcomes in patients with HFpEF, Borlaug said.

“We are disappointed that this treatment strategy failed to live up to the promise it had shown in preliminary studies,” Borlaug said. “We need to redouble our efforts to find an effective approach to treating this patient population, which represents a huge unmet public health need.”

“With a stiff heart, the effort involved in filling it with blood leads to high pressure, which backs up into the lungs, causing lung pressure to increase and creating a feeling of shortness of breath,” Borlaug said.

Nitric oxide, a gas produced by cells that line the body’s arteries, plays a key role in relaxing blood vessels and decreasing heart muscle stiffness. Previous research suggested that increasing nitric oxide activity in the body might help to improve shortness of breath in patients with HFpEF. However, prior studies have not identified an effective way of delivering the nitric oxide to the bloodstream.

The current study tested inorganic nitrite, a byproduct of the breakdown of nitric oxide in the body that can be converted back into nitric oxide during physical activity. Preliminary studies suggested that inhalation of inorganic nitrite could reduce pressure in the heart and improve exercise capacity.

The trial enrolled 105 patients who had HFpEF causing shortness of breath and fatigue with ordinary or mild physical activity. Their median age was 68 years; 57 percent were women, 81 percent had high blood pressure and 31 percent had diabetes. Patients were randomly assigned to receive either the medication or a placebo, administered with a nebulizer three times a day for four weeks. All patients were trained in how to use the nebulizer to inhale the medication.

After four weeks, the two groups switched, so that by the end of the study all patients had received both the study medication and the placebo. The study was double-blinded, meaning that neither patients nor their doctors knew who was receiving which treatment.

The primary endpoint was change in maximal exercise capacity, or the maximum amount of oxygen that the body can consume, which is an indicator of cardiac output, Borlaug said. Secondary endpoints included changes in patients’ daily activity levels, measured by portable accelerometers that they wore; quality of life; and severity of heart failure symptoms.

After analyzing patient data collected at the end of the study, researchers found no significant differences for any of the primary or secondary endpoints. At baseline, exercise capacity (peak oxygen consumption) was severely depressed (13.5 mL/kg/min). In the group receiving nitrite, there was no effect on peak VO2 as compared with the placebo group. Similarly, there was no significant between-group differences in daily activity levels, health-related quality of life scores, symptom severity classification, echocardiographic and exercise measures, or NT-proBNP levels, which reflect the degree of stress on the heart. There were no differences in serious adverse events.

There are several factors that may have influenced the trial outcomes, Borlaug said. First, patients needed to use the nebulizer three times a day for about 10 minutes each time.

“It’s arduous to take any medication three times a day,” he said. “Needing to set aside time three times every day to do a 10-minute treatment could have interfered with adherence.”

The research team will be analyzing study data on adherence, he said.

Second, four weeks of treatment may not have provided sufficient exposure to the medication to improve exercise capacity or quality of life, and the duration of time where the medicine remains active in the bloodstream may not have been long enough.

Third, the study did not require patients to increase their activity levels as part of its design. Prior studies have suggested that exercise training can improve exercise capacity and quality of life in people with HFpEF, he said.

“The medication may be like the gas that can make the car go, but without a spark to ignite it, the car doesn’t move,” he said.