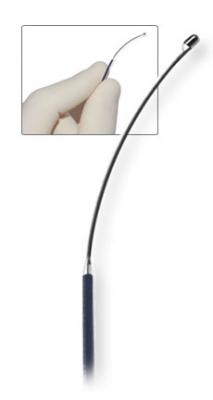 The Symplicity Catheter System manufactured by Ardian Inc. delivers radio frequency (RF) energy from within the renal artery to block conduction in the surrounding renal nerves.

January 21, 2010 – A new minimally invasive therapy using radiofrequency ablation to short-circuit nerves in the kidney arteries shows promise in treating uncontrolled hypertension. The research was presented this week at the International Symposium on Endovascular Therapy (ISET).

“This treatment may help people who have the worst of the worst disease – who have hypertension that medications just can’t control and who are most likely to suffer from stroke and heart disease,” said Krishna Rocha-Singh, M.D., medical director of Prairie Vascular Institute, Springfield, Illinois, who is presenting results at ISET. “There are broader implications of this procedure, such as the possibility of using it to address other conditions, such as chronic kidney disease and heart failure. Another hope is that we eventually may be able to use this therapy to help patients with mild to moderate hypertension, without the use of drug therapy.”

Blood pressure is controlled by a combination of nerve signals and hormonal interactions between the brain, heart, blood vessels and kidneys. Hyperactive nerve signals from the kidneys may be a main cause of hypertension in many people. The nerves traveling to the kidneys are a key final common pathway needed to raise blood pressure. RDN treatment is used to interrupt these hyperactive signals between the kidney and the brain, leading to lower blood pressure. In the procedure, a tiny incision is made in the groin artery and a thin tube (catheter) with an electrode on the tip is inserted and advanced to the kidney arteries. The electrode is placed at up to six points along each artery, and low-dose radiofrequency energy is delivered to disable the surrounding nerves.

The kidneys play a central role in the long-term control of blood pressure, so the kidney is a major target of medicines used to control hypertension. However, more than a third of the 75 million Americans with hypertension are unable to control the condition, despite taking medication.