Lars Thording has a background in academia, consulting and the medical industry technology.

The Abbott  Advisor HD mapping catheter and the Biosense Webster Vizigo introducer were among two of the top innovations displayed on the show floor of Heart Rhythm 2018.

Electrophysiology is one of the most rapidly-growing areas of healthcare. That may be why it’s the focus of so many industry events including the Heart Rhythm Society’s annual conference. For those of you who were not able to attend Heart Rhythm 2018 in May, here are a few key takeaways and insights gleaned from the conference.

One of the most anticipated sessions at the event revealed the results from an evidence-based study comparing the effectiveness of early atrial fibrillation (AF) ablation to drug treatment. However, the study did not produce the expected results. It did not show that early intervention in AF with ablation is more effective than pharmaceutical treatment in terms of mortality rates. However, results did reveal that in patients with Afib, catheter ablation conferred better outcomes compared with drug therapy in on-treatment and per-protocol analyses, but not in an intention-to-treat analysis.

Although the secondary endpoint showed an advantage for AF ablation, many clinicians I spoke with did not think the study — Catheter Ablation vs. Anti-arrhythmic Drug Therapy for Atrial Fibrillation (CABANA) — added much to what we already know about the effectiveness of AF ablation. Most experts already widely recognize ablation to be a revolution in AF treatment, and in cardiology, because it replaces pharmaceutical treatment with a curative approach.

Another interesting session detailed results from a significant, first-of-its-kind study that found a link between post-traumatic stress disorder (PTSD) and atrial fibrillation in more than 1 million post-9/11 veterans seeking medical care. AF has already been connected to other common cardiovascular risk factors such as hypertension, diabetes, obesity and sleep apnea. Yet researchers are just beginning to study the impact of significant, ongoing stress and negative emotions on this condition. Results of the study showed that after 4.8 years, nearly 2,500 veteran patients were diagnosed with AF.

Overall, attendance to the Heart Rhythm event continues to be strong, but with a significant shift in the type of attendees participating in the event this year. In the past, it was common to witness large groups of nurses from the same lab congregating around new device displays and discussing the relevance for their EP labs. In general, there were fewer nurses, techs, supply chain professionals and “hands-on” staff members in attendance this year compared with previous events, and a greater number of clinicians overall. While financial constraints may be the simple reason why hospitals do not send their nursing and purchasing staff to HRS, there may also be an added dimension. Electrophysiologists are highly trained clinicians, but while their focus is on the clinical aspects of the cardiac arrhythmia procedures, many of them are now leading the discussion about economic aspects as well. This is because in electrophysiology today, healthcare economics and clinical issues are complexly intertwined.

Electrophysiologists (EPs) are passionate about the promises of AF ablation as a curative alternative to pharmaceutical treatment. As technologies become more sophisticated, AF ablation could become a means to provide advanced heart disease solutions to millions of Americans. Since ablation is also one of the fastest growing areas of healthcare today, the progress of AF ablation is closely monitored both from a clinical and an economic perspective. For many EPs, this means that they are looking at the bigger picture of the EP ecosystem — from patient safety to device costs and beyond — in order to help their organization succeed in this complex clinical landscape.

There were fewer new technologies presented, and recent years’ focus on new capital equipment like mapping systems (consoles, etc.) had been replaced by a focus on disposable devices.
Biosense Webster prominently displayed its newest introducer, the Vizigo, which promises to reduce patient radiation exposure by limiting fluoroscopy.

Baylis displayed its latest offering, a steerable sheath designed specifically for use with the company’s own transseptal needles.

Abbott’s booth was almost entirely dedicated to introducing the new Advisor HD mapping catheter. This competes directly with the Biosense Webster Pentaray and is a non-lasso version of Abbott’s original Advisor FL. Its design is quite unique and its function promising.

4. The Cost of Cardiac Arrhythmia Treatment is a Barrier

New catheters and sheaths are needed to increase safety and efficacy of procedures, but some might suggest that the industry needs to come up with more than incremental improvements. AF ablation still has low penetration due to device costs, procedure complexity and moderate success rates. Most, if not all, new technologies presented offered increased safety or better efficacy, but usually at a higher cost. Few innovations were about reducing costs, although the arguably tallest barrier to cardiac arrhythmia treatment growth is the cost of the procedures.

If the cardiac arrhythmia treatment approach is to reach its potential, innovation should be focused on systems and treatment solutions that dramatically improve efficacy, reduce complexity and increase access while lowering costs.

5. New Tech and EP Innovations are Being Redefined

New technologies developed by original equipment manufacturers (OEMs) like Medtronic, Philips, Biosense Webster and Abbott shared space in the exhibit hall next to some fairly small and new players in the space. Many of these organizations are looking to commercialize advancements focused on a singular innovation in EP. Of course, commercialization usually means being acquired by the large manufacturers at the other end of the exhibit floor.
Stryker Sustainability Solutions as well as Innovative Health represented an exception to this with their offering of single-use device reprocessing. The idea for their services is to lower the cost of procedures without compromising safety and functionality of devices. These vendors offer a process to clean, test and sterilize devices.

Reprocessing of expensive EP devices may offer a significant step forward in driving cost savings. The value of this was illustrated with the recent FDA clearance for the reprocessing of the Abbott ViewFlex catheter, one of the commonly-used yet complex-to-reprocess EP devices in the industry today,.

Editor’s note: Lars Thording, Ph.D. has a background in academia, consulting and industry leadership. He has been responsible for the launch of numerous market-disrupting solutions across healthcare, insurance and technology. Originally from Denmark, Lars has taught at universities in Denmark, Ireland and the United States. He currently serves as the vice president, marketing and public affairs, Innovative Health, a medical device reprocessing company specializing in electrophysiology and cardiology technology. Lars currently serves on the board of the Association of Medical Device Reprocessors. 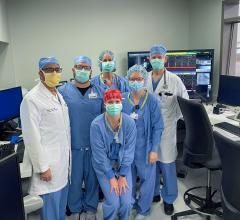