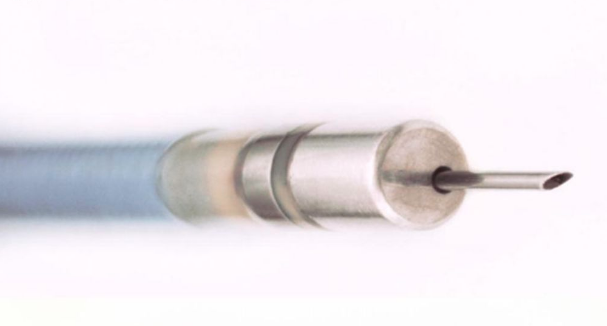 May 21, 2018 — The available electrophysiology catheter ablation technologies are not designed for use in the ventricular anatomy, so a new needle ablation catheter from Biosense Webster was tested in a study to assessed the safety.[1] The six-month data from the study was presented at Heart Rhythm 2018, the Heart Rhythm Society’s 39th Annual Scientific Sessions.

All 31 patients included in the trial failed standard ablation and medical therapy. However, the needle-based system was able to eliminate their tachycardia.

Patients were enrolled at three centers. At putative target sites selected based on endocardial mapping, the 27 gauge needle was deployed up to 10 mm into the myocardium for recording and pace mapping. Then irrigated with contrast/saline for radiofrequency (RF) ablation with current titrated to a maximum needle temperature of 60 degrees Centigrade.

Irrigated needle ablation was performed in 31 patients at the three centers. Most patients had nonischemic heart disease (NICM) with sustained monomorphic VT (table). A median of 15 RF needle applications per patient were delivered to selected RV/LV septum and free wall sites.

Links to all the Heart Rhythm 2018 Late-breaking Studies