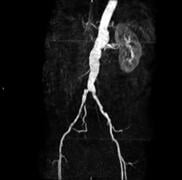 The agent helps produce high-resolution images and is uniquely designed for vascular imaging, making it possible for physicians to detect vascular disease less invasively than with conventional X-ray angiography. Additionally, the product requires no radiation or iodine and can provide both first pass and blood pool images with a single, low dose injection.”

Blood pool agents remain in the vasculature for an extended period of time, increasing the brightness of blood, resulting in high-resolution images. The albumin-binding properties of Ablavar make it uniquely designed for vascular imaging because it provides an expanded imaging window, making it possible to evaluate not only the location of disease but also the extent and severity of disease.

The agent was cleared for use in the United States in January and is the first and only blood pool contrast agent approved for magnetic resonance angiography to evaluate peripheral artery disease (PAD).