Most CRT-P Patients Would Not Benefit From Addition of Defibrillator 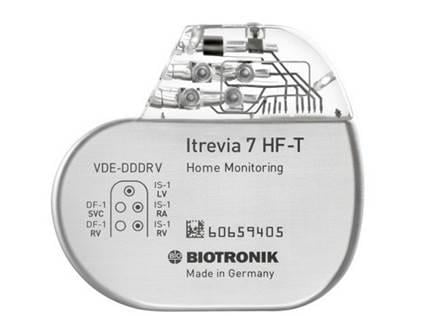 September 3, 2015 — Most patients with a cardiac resynchronization therapy (CRT) pacemaker would not benefit from the addition of a defibrillator, according to results from the CeRtiTuDe cohort study presented at the European Society of Cardiology (ESC) Congress.

“The choice between CRT with (CRT-D) or without (CRT-P) a defibrillator remains a contentious issue,” said Prof. Jean-Yves Le Heuzey, cardiologist at Georges Pompidou Hospital, René Descartes University in Paris, France. “No randomized clinical trial has been conducted to guide this choice.”

Patients with congestive heart failure are at high risk of dying from sudden cardiac death. Over the last decade, CRT and implantable cardioverter defibrillators (ICDs) have markedly improved prognosis. Guidelines do not make firm recommendations on the choice of CRT-P versus CRT-D, stating that there is insufficient evidence from randomized controlled trials to show that CRT-D would additionally improve survival compared to CRT-P. This has left room for physician discretion and resulted in wide variation in worldwide implantation rates. For instance, the proportion of CRT implantations which are CRT-D reaches more than 90 percent in the United States whereas it is lesser across Europe.

“Whether such a high rate of CRT-D use over CRT-P is justified is an important question to answer in terms of significant costs and device-related complications,” said Le Heuzey. “ICD lead failures, inappropriate shocks and risk of infection are real problems with impacts on quality of life and possibly survival. But the ideal way to answer this question, a randomized controlled trial directly comparing CRT-P to CRT-D, would have to be large, expensive and is unlikely to ever be conducted.”

The CeRtiTuDe study evaluated the characteristics of CRT-P versus CRT-D patients in a real-world scenario and analyzed to what extent CRT-P patients would have benefited from the presence of a back-up defibrillator. It was a multicenter prospective follow-up cohort study that enrolled a total of 1,705 consecutive patients implanted with a CRT (CRT-P 535; CRT-D 1 170) between 2008 and 2010 in France. Adjudication for causes of death was conducted at two years follow-up.

At two-year follow-up 270 patients had died, giving an annual overall mortality rate of 77.9 per 1,000. The crude mortality rate among CRT-P patients was double compared to CRT-D (relative risk [RR]=1.96, 95 percent confidence interval [CI]=1.51-2.66). “By cause-of-death analysis, a large proportion of the excess mortality among CRT-P subjects was related to an increase of non-sudden death,” said Le Heuzey. “This could indicate that this excess mortality is due to heart failure and non-cardiovascular events.”

He concluded: “Our findings suggest that patients selected for CRT-P in routine clinical practice would not benefit from the addition of a defibrillator. This indicates that CRT-D rates could be reduced, with consequent decreases in costs and device-related complications.”