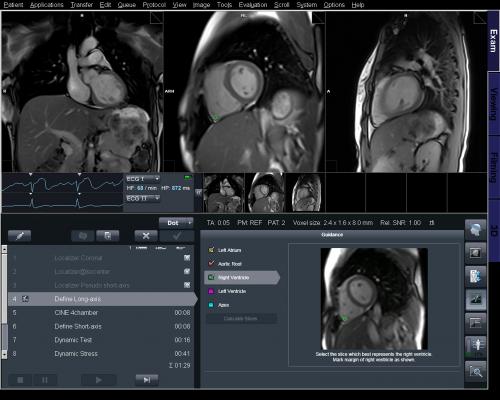 April 28, 2015 — Researchers from Johns Hopkins performing sophisticated motion studies of heart magnetic resonance imaging (MRI) scans have found that specific altered function in the left atrium may signal stroke risk in those with atrial fibrillation and those without it.

Stroke is a frequent and dreaded complication of atrial fibrillation (afib). But predicting which of the estimated six million Americans with afib are at highest risk has long challenged physicians weighing stroke risk against the serious side effects posed by lifelong therapy with warfarin and other blood thinners.

Reporting April 27th in the Journal of the American Heart Association, researchers said the specialized tests can pave the way to more accurate risk-gauging models and more precise therapy among with highest likelihood of stroke. The current risk-assessment guidelines underestimate that risk in about 12 percent of people with afib who would benefit from prophylactic treatment with blood thinners, researchers said. At the same time, researchers added, averting overtreatment in lower-risk patients would prevent the rare but often-devastating brain bleeds that occur as a side effect of blood-thinners.

The study results, the research teams said, also cast doubt on the current clinical dogma that chaotic beating of the upper chambers of the heart during Am12trial fibrillation fuels the blood clot formation that causes stroke. That view, the team said, has failed to explain why many people with atrial fibrillation never have strokes and why many with history of atrial fibrillation have no evidence of abnormal rhythms within a month before the stroke.

“Our research suggests that certain features of the heart’s upper left chamber that are easily seen on heart MRI could be the smoking gun we need to tell apart low-risk from high-risk patients,” said lead investigator and heart rhythm specialist Hiroshi Ashikaga, M.D., Ph.D., assistant professor of medicine and biomedical engineering at the Johns Hopkins University School of Medicine.

The investigators said just how the suppressed function and altered anatomy of the left atrium cause stroke remains unclear, but said they have reason to believe these features reflect more sluggish blood flow that leads to clot formation and precipitates stroke.

“Our observations suggest that altered function in the left atrium of the heart may lead to stroke independently of the heart rhythm disturbance itself,” said co-investigator Joao Lima, M.D., professor of medicine and radiology at the Johns Hopkins University School of Medicine and director of cardiovascular imaging at The Johns Hopkins Hospital. “What this means is that people with compromised function in the left upper portion of the heart may be at risk for stroke, with or without atrial fibrillation.”

“Maybe when it comes to stroke risk and afib, we’ve been chasing the wrong guy all along,” Ashikaga said. “Maybe atrial fibrillation itself is not the real culprit and dysfunction of the left atrium is the real baddie. It’s a possibility we have to consider and will in an upcoming study.”

The new findings are based on analysis of records of 169 Johns Hopkins patients, ages 49 to 69, with atrial fibrillation who had cardiac MRIs before undergoing a minimally invasive procedure to burn off — or ablate — small sections of heart tissue that trigger the aberrant rhythm. Eighteen of the patients had suffered minor or major strokes prior to their ablations.

Using the enhanced motion imaging, the investigators compared images of the hearts of patients who had suffered strokes with those who had not, noticing several marked differences.

The research team is next planning to test the predictive value of this imaging approach in patients with and without atrial fibrillation, follow them closely and track their stroke risk over time.