Myocarditis is an Under-recognized Etiology of Symptomatic Premature Ventricular Arrhythmia

Findings of the MAVERIC Registry presented at the Heart Rhythm 2018 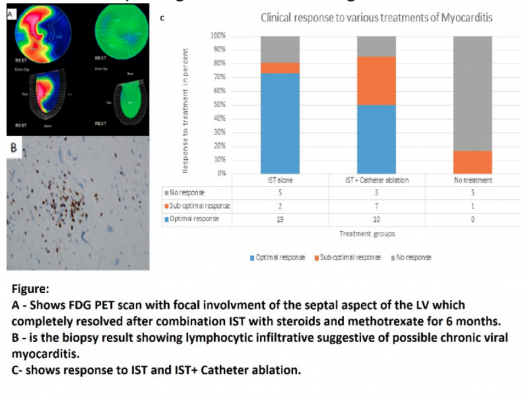 May 18, 2018 — A significant number of patients with symptomatic premature ventricular contractions (PVCs) have underlying myocarditis identified by FDG-PET, and treatment with immunosuppressive therapy may significantly impact outcomes. This was a key finding in a review of the Myocarditis and Ventricular Arrhythmia (MAVERIC) Registry presented at Heart Rhythm 2018, the Heart Rhythm Society’s 39th Annual Scientific Sessions.

The registry data includes 107 patients with symptomatic PVCs and no underlying ischemic heart disease (IHD). These patients had viral and autonomic serology, 18F-fluorodeoxyglucose positron emission tomography (FDG-PET), cardiac magnetic resonance imaging (CMR) and myocardial biopsy. Patients with focally positive PET scans were labelled as mycarditis and were treated with immunosuppressive therapy (IST) as first line therapy, followed by ablation as needed. Response to therapy was assessed by repeat PET scan and Holter monitor at three-monthly intervals. Optimal clinical response was defined as greater than 80 percent decline in PVC burden and resolution of uptake on PET scans. Suboptimal response was defined as less than 80 percent decrease in ventricular arrhythmia burden on cardiac monitoring with lack of PET resolution.

The cohort was composed of 41 percent men with 57±15 years and 47±11.8 percent left ejection fraction (LVEF). Myocarditis was seen in 51 percent (55/107) of PET scans. Cardiac MRI was correlative of PET in 27.4 percent of patients. In 47 percent of patients, PVC site of origin correlated with site of inflammation (maximal intensity). IST was started in 83.6 percent (46/55) of PET positive patients. There were 32 patients (69.5 percent) who received IST alone and 14 (30.5 percent) underwent IST and catheter ablation.

Optimal response was seen in 76 percent (29/38) and suboptimal response was seen in 24 percent (9/38) over a mean follow up of 6±3 months. The data show 37 percent of patients who had left ventricular dysfunction ejection fraction (EF) improved (Δ13 ± 6 percent). Lymphocytic infiltrative myocarditis was the most common pathologic finding (46 percent, 13/28), biological markers were not diagnostic. Of the untreated patients, 67 percent (4/6) had worsening EF (Δ10 ± 4 percent) over six months of follow up.

Researchers said a randomized, control trial should be undertaken to assess the impact of IST in patients with PVCs and myocarditis. They said this would help better understand the etiopathogenesis and therapy strategies.