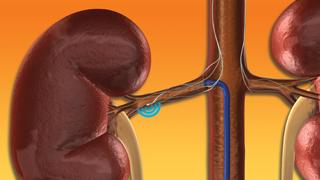 November 22, 2010 – Data presented at the American Heart Association’s Scientific Sessions 2010 showed that percutaneous renal nerve ablation reduces blood pressure. The data, which was also published in The Lancet was from the Symplicity HTN-2 trial and looked at Ardian’s Symplicity Catheter System.

Research has shown that each incremental 20/10 mmHg increase of blood pressure above normal levels is associated with a doubling of cardiovascular mortality over a 10 year period. Reducing systolic blood pressure by as little as 5 mmHg can reduce the risk of stroke by almost 30 percent.

“The impressive results of this study show that Ardian’s Symplicity System has the potential to become a truly revolutionary treatment,” said Murray Esler, M.D., Ph.D., principal investigator of the trial and associate director of the Baker IDI Heart and Diabetes Institute of Melbourne, Australia. “Combined with findings from the earlier Symplicity HTN-1 study, which demonstrated the safety and durability of the therapy out to two years, these results fuel our enthusiasm for the potential of this treatment to significantly impact the standard of care for the large number of patients suffering from this disease.”

The Symplicity HTN-2 trial was an international, multi-center, prospective, randomized, controlled study of the safety and effectiveness of renal denervation in patients with uncontrolled hypertension. One hundred-six patients were enrolled from 24 investigational sites. At baseline the randomized treatment and control patients had similar high blood pressures: 178/97 mmHg and 178/98 mmHg, respectively, despite both receiving an average daily regimen of five antihypertensive medications. After six months, the average blood pressure of the renal denervation group was reduced to 146/85 mmHg, compared to an average blood pressure of 179/98 mmHg for the control group.

The study also found that the therapy was safe, with no serious device or procedure-related events, no cardiovascular complications and no kidney-related complications.

“Hypertension is often described as a ‘silent killer’ as it frequently has no symptoms yet significantly increases a patient’s risk of heart attack, stroke or death,” said Andrew Cleeland, president and CEO of Ardian. “Positive data from the Symplicity HTN-2 trial reinforces our belief that this treatment has the potential to significantly improve the quality of life for the millions of people around the world with uncontrolled hypertension. We look forward to beginning a U.S. pivotal study of the device to gather data needed to bring this promising therapy to patients and physicians in the United States.”