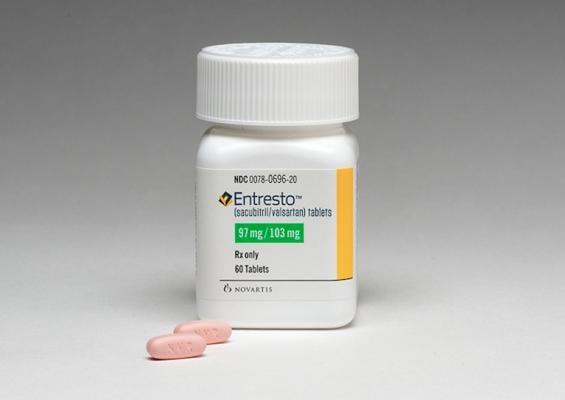 May 15, 2021 — The combination heart failure drug sacubitril/valsartan (Entresto) did not significantly reduce the rate of heart failure or cardiovascular death following a heart attack compared to ramipril, an angiotensin converting enzyme (ACE) inhibitor proven effective in improving survival following heart attacks. Findings from the PARADISE-MI trial were presented as a late-breaking study at the American College of Cardiology (ACC) 2021 virtual Scientific Session.

The study is the first large trial to examine whether sacubitril/valsartan can reduce heart failure and associated hospitalizations and deaths in patients post-heart attack who face a high risk of developing heart failure. Patients taking sacubitril/valsartan were about 10% less likely than those taking ramipril to experience the study’s primary endpoint (a composite of cardiovascular death, heart failure hospitalization or development of symptomatic heart failure) falling short of the prespecified threshold of a 15% reduction required to demonstrate statistically significant improvement.

“Although we did not significantly reduce our primary endpoint, there were consistent findings that sacubitril/valsartan could represent an incremental improvement over ramipril,” said Marc Pfeffer, M.D., Ph.D., Distinguished Dzau Professor of Medicine at Harvard Medical School and cardiologist at Brigham and Women’s Hospital, and the study’s lead author. “The results are encouraging, especially when considering recurrent heart failure events and not just the first heart failure events, but the study is not definitive. We did notice several aspects of heart failure development that were lessened with sacubitril/valsartan but to investigate these observations would require further evaluations.”

Heart failure is a condition in which the heart becomes too weak or too stiff to pump blood effectively to the rest of the body, causing fatigue, swelling and shortness of breath. While a heart attack does not always lead to heart failure, heart attack survivors are eight times more likely to develop heart failure than those who have not had a heart attack, which has led to an increased emphasis on preventing heart failure in these patients.

The PARADISE-MI trial enrolled 5,669 patients in 41 countries who had survived a heart attack less than a week before enrolling in the study. None of the patients had heart failure, but all were considered to face a high risk of developing it based on a measure of their heart’s pumping ability or fluid buildup in the lungs as well as at least one of eight additional risk-enhancing factors. Most patients were already taking medications to reduce heart disease risk before their heart attack, including antiplatelet therapy, blood pressure lowering medications and cholesterol lowering medications.

Half of the participants were randomly assigned to receive sacubitril/valsartan and half received ramipril. Most achieved the full dose of their assigned medication and kept taking it throughout the trial, which had a median follow-up period of 23 months.

The study was funded by Novartis Pharmaceuticals.