The company’s Aquapheresis therapy is a simplified method for safely and effectively removing the excess salt and water in patients with fluid overload. The company said the independent studies continue to validate the results of earlier research.

Robert L. Scott and colleagues at Mayo Clinic Arizona in Phoenix explored the clinical efficacy of intermittent outpatient ultrafiltration in 13 refractory heart failure patients. The treatments were generally done on two successive days for eight hours a day and repeated as needed. Patients were monitored for changes in heart rate, blood pressure and urine output during the treatments. The study described how ultrafiltration has emerged as a highly effective therapy for hospitalized, acutely decompensated heart failure patients that leads to robust reductions in recurrent hospitalizations. The researchers concluded that for patients with decompensated heart failure, outpatient intermittent ultrafiltration is an effective and safe therapy with a trend towards reduced hospitalizations.

Cheryl Bartone and colleagues at The Christ Hospital in Cincinnati investigated the benefits of early (less than 24 hours) initiation of ultrafiltration in 103 patients. They concluded that early initiation of ultrafiltration for acute decompensated heart failure is associated with both a shorter stay in the hospital and fewer 90-day readmissions.

Bartone and her colleagues also conducted another study based on data from an independent, prospective registry of 117 patients at The Christ Hospital. They investigated the predictors of serum creatinine elevation, a diagnostic sign of possible kidney (renal) impairment, in acute decompensated heart failure patients treated with ultrafiltration. The formula developed for estimating the expected serum creatinine may allow fine-tuning of the ultrafiltration rate to minimize development of possible renal dysfunction.

Tracy Stephens and colleagues, also at The Christ Hospital in Cincinnati, tested an algorithm-based approach to determining target volume removal in acute heart failure patients. They found that the major factors behind optimal target weight loss were baseline weight, renal function and degree of volume overload; these were incorporated into an algorithm for determining the target weight to be removed and compared to the target identified by the heart failure specialist. Validated using 47 patients, there was good correlation between the two methods.

Nishant B. Jalandhara, M.D., and colleagues at Mount Sinai Hospital and the Veterans Administration Medical Center, both in New York City, conducted a meta-analysis study with 344 patients and assessed the effect on renal function when patients with acute decompensated heart failure were treated with ultrafiltration. Although results were not statistically significant, their study concluded that ultrafiltration leads to a modest increase in serum creatinine in acute decompensated heart failure patients with compromised renal function. They suggested that since ultrafiltration may also have a renal protective effect and might restore responsiveness to diuretics, further studies are needed.

A study by Mazen Hanna and colleagues at Cleveland Clinic in Cleveland compared outcomes in “Ultrafiltration vs. Usual and Customary Care for Patients with Severe Heart Failure.” In this single-center, prospective, randomized controlled trial, 36 patients with advanced heart failure were admitted to a heart failure intensive care unit. The group treated with ultrafiltration demonstrated greater weight reduction, higher average total volume removed and shorter hospital stay length. There were no significant differences in changes in renal function, neurohormones or hemodynamics. The study indicated that early ultrafiltration, compared to usual care with diuretics, appeared safe and effective in providing greater reduction in weight and average volume removed, leading to a shorter length of stay without adverse cardio-renal consequences.

Fluid overload can be caused by problems with the heart, kidneys, liver, lungs, and is frequently experienced after surgical operations, trauma and burns. The leading cause of fluid overload is congestive heart failure (CHF), sometimes referred as just heart failure (HF). Heart failure is a condition that affects approximately 5 million Americans and is responsible for more than 3.1 million primary and secondary hospitalizations annually.

CHF Solutions’ Aquapheresis therapy is a non-pharmacological method to remove the excess salt and water in patients with fluid overload. Aquapheresis is currently available at more than 250 medical centers and outpatient clinics worldwide. To date, over 15,000 patients have received therapy.

The Fysicon QMAPP hemodynamic monitoring system is the newest system to gain FDA clearance. It is about the size of a ream of paper. 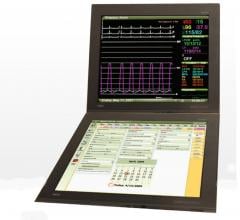 Hemodynamic data shown on screens from the Merge Hemo recording system. It is among the newer generation hemodynamic systems for cath labs that are more user friendly and have technologies to speed workflow. 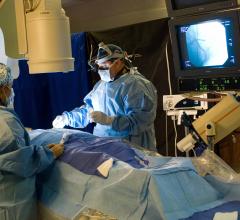 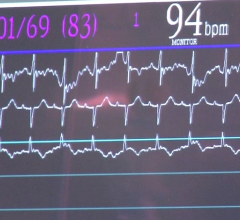