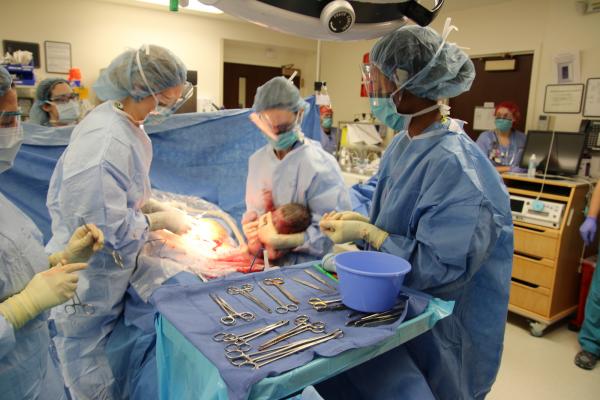 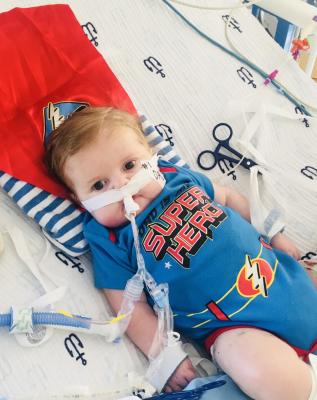 September 25, 2018 — Five-month-old Jack Palmer is home with his family in Kansas City after undergoing an extremely rare heart-lung transplant at St. Louis Children’s and Washington University Heart Center in May. At five months of age, Jack was the youngest patient to undergo this surgery successfully in more than a decade.

Heart Center physicians tried the procedure as an alternative treatment after Jack was diagnosed with hypoplastic left heart syndrome (HLHS) with an intact atrial septum and severely damaged lungs – a congenital heart defect in which the baby essentially has half of a heart.  Traditionally infants born with HLHS undergo a series of three surgeries in an attempt to correct the condition, but most do not survive.

Jack’s parents, Chuck and Tiffany Palmer, discovered their son’s condition during a routine ultrasound.  The family was given little-to-no hope for the baby’s survival, but the Palmers would not give up. They were referred to two different pediatric heart centers and were declined therapy both times; however, when Pirooz Eghtesady, M.D., chief of pediatric cardiothoracic surgery with Washington University at St. Louis Children’s Hospital learned about Jack's story, he thought he could take a different approach.

“My thought process was if we keep doing what people have done historically, we’re going to keep getting the same results,” said Eghtesady.  “Truthfully, he had a difficult and stormy course early on and there were times that people had lost hope and didn’t think he was going to make it through, but he did.  I am grateful that his parents trusted us enough to give us the privilege of caring for him.”

Almost immediately after surgery, Jack’s parents noticed he seemed like a new baby. “The first thing I noticed was how pink he was,” said Tiffany. “He was intubated for a few weeks after, but he was awake and could interact and smile.”

“He’s interactive, he’s playful, he seems to be developing normally,” said Eghtesady. “Right now, it looks like he’s going to be a normal kid and that’s very exciting.”

The Heart Center at St. Louis Children’s and Washington University is the largest in the region, caring for nearly 5,000 pediatric patients over the past 10 years.