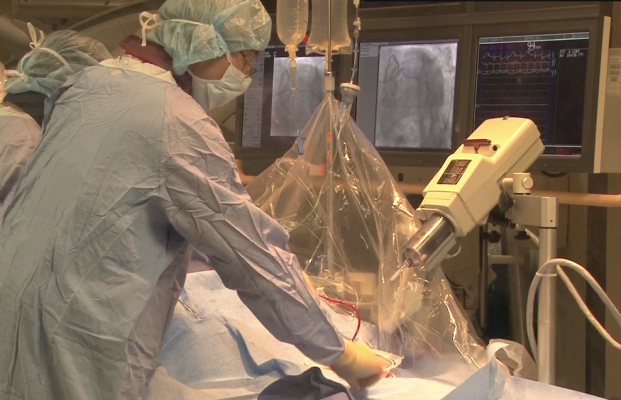 May 31, 2016 — In a recent study, the use of a stent to repair pulmonary artery stenosis in children and adults with congenital heart disease was successful in the majority of patients, but many also experienced serious complications. The study was published in March in the Journal of the American College of Cardiology.

Pulmonary artery stenosis occurs when the pulmonary artery, a large blood vessel that connects the heart to the lungs, is significantly narrowed or small, usually as a result of a congenital defect. This condition causes the heart’s right ventricle to work harder to pump blood into the artery, leading to significant health problems.

Using data from the American College of Cardiology IMPACT Registry, researchers examined records from 1,183 patients treated at 59 U.S. hospitals between January 2011 and January 2014. The age of the population ranged from less than a year to older than 18, with the average age about 9 years old. Of that group, 262 patients had a single ventricle.

For patients with two ventricles, researchers developed two definitions to measure success, each with separate benchmarks. Both definitions looked at whether pressure in the right ventricle decreased and the diameter of the pulmonary artery increased following the procedure. The second definition included an additional measurement — whether the pressure across the obstructed vessel changed, and by how much.

Researchers found that when using the first definition, 76 percent of the procedures were considered successful, while 86 percent based on the second definition were deemed a success. The overall success rate was more than 75 percent.

For single ventricle patients, researchers used one definition to measure success: an increase in the diameter of the pulmonary artery after stenting. Among those procedures, 75 percent were considered successful. The complication rate for all patients in the study cohort was 14 percent, with 9 percent experiencing death or a major adverse event, often associated with bleeding.

Matthew J. Lewis, M.D., M.P.H., the study’s lead author and a cardiology fellow at Columbia University Medical Center, said, “These findings should inform referring physicians and operators regarding patient selection prior to pulmonary artery stenting.” He added that given the high rate of adverse events, further study is needed to determine how to minimize patient risk and further validate definitions of procedural success.

In an accompanying editorial, Phillip Moore, M.D., M.B.A., director of the Pediatric Cardiac Catheterization Laboratory at the University of California San Francisco, pointed out that “The success rate is lower and the complication rate higher for this procedure than previously recognized,” and that a single ventricle has, for the first time, been shown to be associated with higher risk. He attributed both findings to the power of big data, which allowed for a more well-defined analysis of predictors of both success and risk.

Noting that the two definitions of success resulted in statistically significant different rates that could affect conclusions drawn from the findings, he said that there is a need for a clear, widely agreed upon definition of procedural success. Similarly, the definitions of major and minor adverse events must be clinically relevant and accepted to allow for accurate measurements and comparisons.

Nonetheless, Moore “applauds the authors for an excellent analysis of the largest dataset available on pulmonary artery stent implantation.” He encouraged the congenital interventional community to engage in a robust discussion on specific definitions of procedural success so that “we can begin to reap the true potential benefits of our ‘big data’ efforts.”