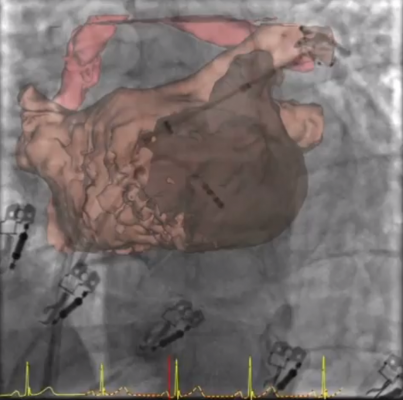 February 7, 2014 — A University of Utah-led study for treatment of patients with atrial fibrillation (A-fib) provides strong clinical evidence for the use of 3-D MRI to individualize disease management and improve outcomes. Results of the Delayed-Enhancement MRI Determinant of Successful Radio-frequency Catheter Ablation of Atrial Fibrillation (DECAFF) study will be published in the Journal of the American Medical Association.
The DECAFF study built on work from the Comprehensive Arrhythmia Research & Management Center (CARMA), which invented the technology enabling heart tissue imaging with MRI. With these images, physicians can assess the extent of the disease using a staging system similar to the ones developed for cancer.
Nassir F. Marrouche, M.D., founder of CARMA, conducted DECAFF in partnership with 15 major medical centers across the United States, Europe and Australia. Marrouche’s study demonstrated that the amount of atrial injury can effectively predict whether patients were likely to benefit from A-fib catheter ablation procedure. Using the enhanced MRI and the Utah Staging System, the hearts of 329 patients were scanned and staged on a scale of 1-4 before undergoing ablation and procedure outcomes were assessed at follow-up.
What Marrouche and his partners found reflected early published findings from CARMA at the U of U: that those with less extensive fibrotic tissue had a greater chance of responding to ablative treatment.
According to the data, patients with less than 10 percent left atrial wall fibrosis showed good outcomes with ablation therapy; and those with greater than 30 percent fibrosis experienced significantly higher failure rates.
Marrouche believes the study findings will encourage a shift in the way physicians treat patients with atrial fibrillation, specifically by integrating MRI into their A-fib management protocols.
For more information: healthsciences.utah.edu