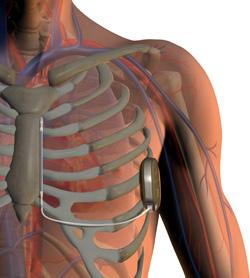 May 14, 2012 – Initial results from the international Evaluation oF FactORs ImpacTing CLinical Outcome and Cost EffectiveneSS (EFFORTLESS) subcutaneous implantable defibrillator (S-ICD) registry shows the S-ICD system is performing appropriately in real-world circumstances and continues to show positive results in patients. This data was presented for the first time at the Heart Rhythm Society (HRS) 2012 annual scientific sessions in Boston.

The purpose of an ICD is to convert all episodes of VT/VF through a defibrillation shock to the heart.  The S-ICD system is a new generation of the ICD that does not require intravascular leads.  Instead, the S-ICD system electrode is inserted under the skin and outside of the ribcage.  The S-ICD System is an alternative for most patients requiring protection from sudden cardiac arrest (SCA).  However, the S-ICD system is not intended for those patients having bradycardia, incessant ventricular tachycardia, or spontaneous, frequently recurring ventricular tachycardia that is reliably terminated with anti-tachycardia pacing.

The EFFORTLESS registry was designed to evaluate the long-term performance of the S-ICD system, including patient quality of life and long-term resource utilization.  The registry is an observational, non-randomized, standard of care evaluation collecting data at international investigational centers where the S-ICD System is approved for use and distribution.

Data from 230 patients that received an S-ICD system at clinical centers in nine countries, including the United Kingdom, Netherlands, Czech Republic, Slovakia, Denmark, Italy, Germany, Portugal and New Zealand, were reviewed and showed:

• Ischemic indications accounted for 38 percent of all patients implanted

• Channelopathies (including Brugada syndrome; Long-QT syndrome and CPVT) accounted for 13 percent of all patients implanted

• Induced shock conversion efficacy within one procedure was 98.5 percent with an average time to therapy for the first shock of 16±4 seconds.

• No patient received therapy for any SVTs (including atrial fibrillation) within a programmed conditional shock zone.

“This data shows us that the S-ICD system is proving to be safe and effective and possibly even a slightly better option than a regular ICD for certain patients,” said Pier D. Lambiase, M.D., Ph.D., FRCP, lead author and senior lecturer and honorary consultant cardiologist at Heart Hospital, University College of London.  “Our goal is to provide patients with heart devices that are less invasive, yet perform the same or better than other options.  Real-world data is critical for us to understand therapy outcomes and so far we are very impressed with the performance of the S-ICD system in a wide range of patients.”

On April 26, 2012, the U.S. Food and Drug Administration (FDA) Circulatory System Devices Panel recommended approval of Cameron Health’s S-ICD system.  This recommendation was a result of a 7-1 panel vote in favor of sufficient data demonstrating the efficacy and safety of the S-ICD System for the treatment of SCA.

The S-ICD system was introduced in Europe in 2009 and results from the first 98 patients were presented at Heart Rhythm 2011.