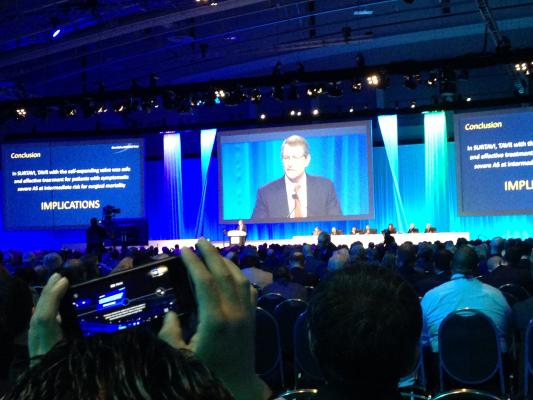 March 17, 2017 - Transcatheter aortic valve replacement (TAVR) was found to be noninferior to surgical aortic valve replacement (SAVR) in intermediate risk patients according to data presented today for the late-breaking SURTAVI Trial. The primary composite endpoint of all-cause mortality and disabling stroke at 24 months was similar for patients with symptomatic, severe aortic stenosis who had an intermediate level of operative risk.

In a modified intention-to-treat analysis that included patients in whom the procedure for their assigned group was attempted and using a novel Bayesian statistical model, Michael J. Reardon, M.D. and colleagues demonstrated that the primary outcome was similar at an estimated 12.6 percent and 14 percent in the TAVR and SAVR arms, respectively. "TAVR was just as good as surgery, but it was not statistically superior to it," said Reardon.

Reardon said this trial had the best surgical outcomes of any TAVR trial to date, so the fact that less experienced TAVR operators can at least match skilled surgeons who often have decades of experience implanting valves is a feat in itself.

"This is by far the best surgical outcomes we have seen in these trials," Reardon said. "This is extraordinary surgery. Despite this, TAVR stood toe-to-toe with surgery, even though we thought it would be much tougher competition in intermediate-risk patients.

Additionally, he said TAVR still has the added benefits of taking less time that surgery, results in shorter lengths of stay, significantly reduces the need for transfusions, reduces instances of cardiogenic shock and atrial fibrillation, and had lower rates of stroke than surgery. "For these reasons, it needs to be made a Class 1 indication," Reardon said during his presentation.

SURTAVI, conducted at 87 centers in the U.S., Canada, and Europe, is the first study to evaluate outcomes with the self-expanding CoreValve and the new Evolut-R bioprosthesis valves, used in 84 percent and 16 percent of TAVR patients, respectively. To allow for TAVR to be evaluated against real-world surgery, the surgeons performing SAVR could select any biologic valve or whether to enlarge the annulus or base of the valve.

The Society of Thoracic Surgeons Predicted Risk of Operative Mortality (STS PROM) scores were 4.4±1.5 and 4.5±1.6 in the TAVR (n = 864) and SAVR (n=796) groups, respectively. The mean age of the patients was 79 years, about 43 percent were women, and about 60 percent had NYHA Class III/IV heart failure.

Overall, deaths from any cause were similar for TAVR and SAVR: occurring in 2.2 vs. 1.7 percent of patients at 30 days, 6.7 vs. 6.8 percent at one year, and in 11.4 vs. 11.6 percent at two years. The rate of major disabling stroke at two years, 2.6 percent for TAVR and 4.5 percent for SAVR, was not statistically significantly different. Although not a primary outcome of the study, researchers noted that the risk of any type of stroke at 30 days was statistically superior for TAVR, 3.4 percent compared with 5.6 percent for SAVR.

Reardon stated there is some indication that the TAVR valve worked better, with a statistically superior valve orifice and lower mean gradients than with surgery on echocardiography at all time points. Moderate-to-severe paravalvular leakage was more common with TAVR than SAVR, occurring in 5.4 vs. 0.4 percent of patients, respectively, and pacemaker implantation was more common with TAVR. In contrast, SAVR was associated with more acute kidney injury, atrial fibrillation, and transfusions. "We saw the best surgical outcomes we’ve seen yet and TAVR did just as well. This is now the second randomized trial that has met its non-inferiority endpoint and should lead to changes in clinical guidelines that will move the field forward and also benefit our patients," Reardon said.

"You have shown here TAVR is very comparable to surgical valve replacement, which is one of the most successful cardiac surgical procedures today," said David Cohen, M.D., director of cardiovascular research at Saint Luke’s Mid America Heart Institute, a panelist at the presentation.

One troubling area of the SURTAVI results was the higher pacemaker rate in TAVR. Pacemakers were needed in 25.9 percent of TAVR patients, compared to just 6.6 percent in surgical patients. This concern was expressed by several panelists following the presentation.

"This concerns us and I think it is due to the design and placement of this device," Reardon said. However, he said it is his opinion that the ability to use a re-positionable valve out-weighs the issues associated with the device. He said implanting the device higher it seats better and may help reduce the pacemaker rates. Many operators are fearful of device embolization if they implant too high, but with the current Evolute R Corevalve device, it can be recaptured and repositioned, so there should be less fear about embolization than in the past. Reardon noted that SURTAVI only included a small portion of Evolute R valves, since the device gained FDA clearance during the trial. He said future Corevalve trials, such as the ongoing low-risk Corevalve trial, should show a lower need for pacemakers with the newer device.

Watch a VIDEO interview with Reardon at TCT 2016 on the state of TAVR.

Last year at ACC 2016, the biggest news was that the Sapien 3 valve out performed surgery in intermediate risk surgical patients. Read more about that trial and others