Ticagrelor Has Comparable Safety to Clopidogrel After Heart Attack

Potent, fast-acting blood thinner does not raise risk of bleeding in those given clot busters 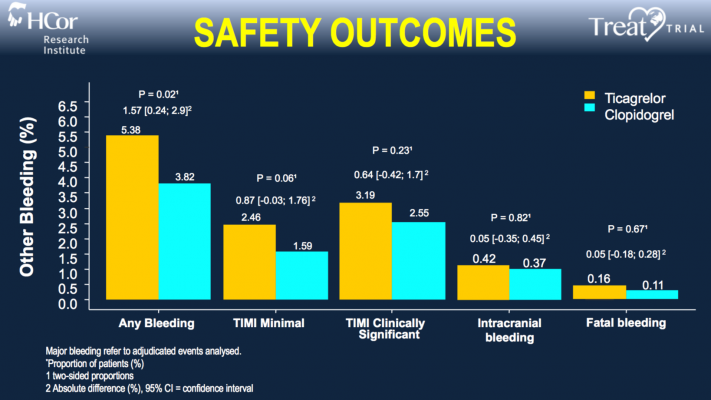 Image from presentation, "Ticagrelor Versus Clopidogrel After Thrombolytic Therapy in Patients With St-Elevation Myocardial Infarction: A Randomized Clinical Trial," Berwanger

March 20, 2018 — Among people younger than 75 years who were given clot busters to treat a heart attack, taking the more potent blood thinner ticagrelor did not increase the risk of major bleeding (the primary endpoint) compared with the standard blood thinner clopidogrel, in a trial being presented at the American College of Cardiology’s 67th Annual Scientific Session.

The results align with those of previous studies assessing ticagrelor’s safety. However, a key difference between the new study and earlier ones is that participants were taking fibrinolytic therapy or “clot busters,” a class of drugs that break up the blood clots that cause heart attacks. These new findings suggest ticagrelor, which reduces clotting by preventing platelets from aggregating, is safe to use in combination with clot busters, at least in patients younger than 75, researchers said.

Clot busters are used to treat heart attacks when it is not feasible to perform percutaneous coronary intervention (PCI), a procedure to open blocked arteries that is the gold standard for treating ST-elevation myocardial infarction (STEMI), the most severe form of heart attack. Use of these drugs is particularly common in countries and healthcare systems where PCI is not generally available 24 hours a day, which includes most lower- and middle-income countries as well as some higher-income countries such as Canada and Australia. The trial was conducted in 10 countries on five continents: Australia, New Zealand, Argentina, Russia, China, Canada, Peru, Brazil, Colombia and Ukraine.

“This is the first large, international trial of ticagrelor in STEMI patients taking fibrinolytic therapy,” said Otavio Berwanger, M.D., Ph.D., cardiologist and clinical epidemiologist at Brazilian Clinical Research Institute, Sao Paulo, and the study’s lead author. “I think doctors, some of whom are already using ticagrelor off-label, will find the results reassuring because they suggest that you can use ticagrelor in this population without causing more major bleeding or fatal bleeding than clopidogrel.”

The trial enrolled 3,800 patients treated for STEMI at more than 180 centers. All patients had received fibrinolytic therapy within 24 hours of their heart attack. Half of the participants were randomly assigned to take ticagrelor and half took clopidogrel. Patients were given an initial loading dose of their assigned drug and then continued taking the drug for 12 months.

After 30 days, the researchers assessed rates of major bleeding events in both study groups using the criteria defined by the Thrombolysis in Myocardial Infarction (TIMI) score, the standard tool used to score bleeding severity. Bleeding is the most common complication from blood thinners, which are used to help prevent heart attacks and strokes by reducing the body’s ability to clot blood.

TIMI-scored major bleeding occurred in roughly 0.7 percent of patients in each group, with no statistically significant difference between the two groups. Thus, the trial met its primary endpoint indicating that ticagrelor is not inferior to clopidogrel in terms of major bleeding at 30 days.

The researchers also found no difference between the study groups in terms of rates of major bleeding according to two other sets of criteria, BARC (Bleeding Academic Research Consortium) and PLATO (Study of Platelet Inhibition and Platelet Outcomes), as well as rates of fatal bleeding and bleeding in the brain. They did observe a significantly higher rate of minor bleeding among patients receiving ticagrelor, which was expected because ticagrelor is a more potent blood thinner.

“For patients who may be resistant to clopidogrel, or for those in whom it may be desirable to use the more potent drug, at least from our results doctors can know it is safe to do so,” Berwanger said. “However, we will have to wait until next year to assess efficacy.”

The risk of bleeding increases with age. Because the new trial was restricted to patients younger than 75 years, Berwanger noted that the findings may not apply to older adults.