In CARES trial, long-term febuxostat use in those with heart disease associated with increased risk of death compared with allopurinol 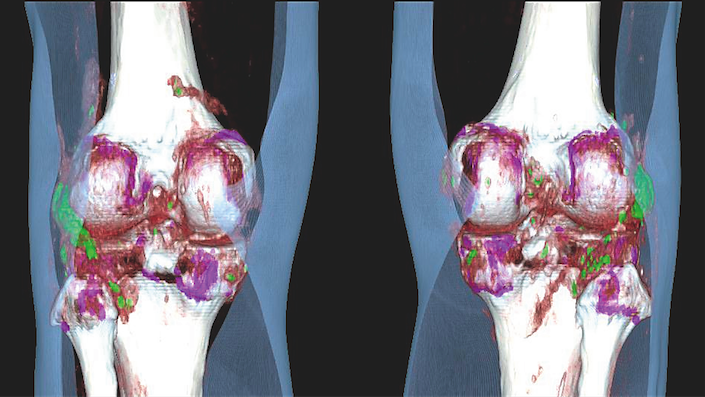 March 20, 2018 — Febuxostat, a gout drug that has been in use for nearly a decade, was found to significantly increase the risk of death, even though it did not raise the risk of the trial’s primary endpoint, a combined rate of fatal and nonfatal adverse cardiovascular events, according to research presented at the American College of Cardiology’s 67th Annual Scientific Session.

It is unusual for a clinical trial to reveal an increased risk of death without also showing a heightened risk of other cardiovascular outcomes such as nonfatal heart attack and stroke. The findings, which showed an uptick in deaths after patients had been taking febuxostat for two years or longer, call into question the safety of long-term febuxostat use in patients with cardiovascular disease, researchers said.

“This finding was entirely unexpected, and we’re at a loss at this time to explain why this finding was seen,” said William B. White, M.D., professor of medicine at the Calhoun Cardiology Center of the University of Connecticut School of Medicine and the study’s lead author. “The results were consistent across many subgroups; there was no evidence of a relationship with age, sex, race or ethnicity, history of cardiovascular disease, or duration or severity of the gout.”

Gout is a form of arthritis estimated to affect more than 8 million people in the U.S. It is caused by a buildup of urate levels in the body and leads to episodes of intense joint pain due to crystal formation and inflammation. Gout is more common in men and is associated with obesity; many people with gout also have or are at risk for heart disease. Although dietary and lifestyle changes can help manage the disease, many patients require medication called xanthine oxidase inhibitors to prevent flare-ups.

The drug allopurinol has served as the standard treatment for gout since the 1960s, but it can cause kidney problems and severe allergic reactions in some patients. Febuxostat was developed to offer a safer alternative, particularly for gout patients with chronic kidney disease.

Early clinical trials for febuxostat showed the drug was effective for lowering serum urate but signaled a slightly elevated risk of adverse cardiovascular events. The U.S. Food and Drug Administration (FDA) approved febuxostat for gout in 2009 under the condition that a robust trial be initiated to assess long- term cardiovascular outcomes.

The FDA-mandated trial, known as CARES, for which results are being reported now for the first time, was designed to assess whether febuxostat was noninferior to allopurinol in terms of a composite primary endpoint that included death from cardiovascular causes, nonfatal heart attack, nonfatal stroke and unstable angina leading to urgent revascularization (a procedure to open blocked arteries). Researchers also examined rates of each of these outcomes separately, as well as other markers of cardiovascular and kidney health.

The trial enrolled more than 6,000 patients at 320 centers in North America. All study participants had gout as well as established cardiovascular disease, such as a previous heart attack, stroke, hospitalization for chest pain (unstable angina), peripheral arterial disease, or both diabetes and small vessel disease. Half of the patients were randomly assigned to receive febuxostat and half received allopurinol; neither the patients nor their doctors knew which drug they had received.

Participants continued taking their assigned medication while researchers tracked their health outcomes for more than 2.5 years on average and as long as 6.5 years in some patients.

By the end of the trial, 656 primary endpoints had occurred. Patients taking allopurinol and febuxostat experienced the composite primary endpoint at nearly the same rate. These results met the study’s threshold for noninferiority, indicating that febuxostat was not inferior to allopurinol. However, when the researchers examined each endpoint separately, they found those randomized to take febuxostat had a 34 percent higher rate of death from cardiovascular causes and a 22 percent higher rate of death from any cause.

A high proportion of patients (45 percent) elected to stop taking their assigned drug before the study ended. In patients who stopped taking febuxostat early, the elevated risk of death was diminished. Overall, however, more patients died after discontinuing their assigned medication than while taking the drug.

Researchers were unable to identify the reason for the surprising—and seemingly contradictory—findings. White said the results of previous tests in animal models and cell cultures do not point to any biological mechanisms that would explain how febuxostat might cause cardiovascular harm.

While the increased risk of death was consistent across subgroups of patients based on demographic factors and health conditions, there were two differences noted regarding medication use. Among patients receiving febuxostat, those who did not regularly take aspirin and those who regularly took nonsteroidal anti-inflammatory drugs (NSAIDs) faced a higher risk of death compared with those taking aspirin or not taking NSAIDs. Researchers cautioned that the study was not designed to assess potential medication interactions, however.

“It is important to be careful when interpreting these findings; it doesn’t necessarily indicate there’s an interaction between these drugs and febuxostat,” White said. “It might have been that these patients had more active gout with more flares, for example.”

The researchers plan to continue to explore the data to determine whether the results may yield insights on the optimal treatment for gout in patients who have both cardiovascular disease and chronic kidney disease. In the approximately 50 percent of patients with a history of chronic kidney disease in the CARES trial, mortality was roughly equal among those taking febuxostat and those taking allopurinol.

In addition, White said ongoing studies being conducted in Europe may help shed light on the potential risks and benefits of febuxostat in patients who have cardiovascular risk factors but who do not have established cardiovascular disease.