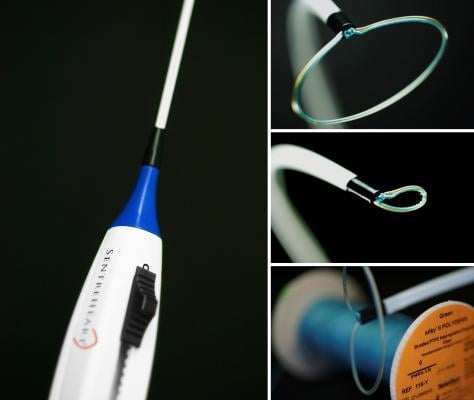 March 16, 2016 — The Valley Hospital in Ridgewood, N.J., is one of 15 U.S. sites currently enrolling patients in a research study evaluating a potential new treatment for patients with symptomatic persistent and long standing persistent atrial fibrillation (AFib).

The aMAZE Trial is evaluating an innovative treatment approach that combines catheter ablation with the use of a device called the Lariat to close off the heart’s left atrial appendage (LAA). Just as the name implies, the Lariat uses a lasso-like stitch to tie off the LAA — a muscular pouch connected to the left atrium of the heart that is the major source of blood clots in patients with atrial fibrillation that can lead to a stroke. The LAA may also be a source of abnormal electrical activity that triggers AFib. The trial will evaluate whether the combination of the two treatment approaches may treat persistent AFib more effectively than catheter abolition alone.

“We are pleased to be one of the first sites in the U.S. to enroll patients in the aMAZE Trial,” said Dan Musat, M.D., principal investigator for the aMAZE Trial at Valley. “We are optimistic that we will be able to show that combining the two approaches is an effective option for patients with persistent AFib.”

AFib is an irregular heartbeat, a rapid heartbeat or a quivering of the upper chambers of the heart, called the atria, due to a malfunction in the heart's electrical system. It is the most common heart rhythm disorder in the United States, affecting more than 5 million people. Because the heart is not beating effectively, blood can pool in the upper chambers of the heart and form a clot, typically in the left atrial appendage. If the clot then travels from the heart to the brain, it can cause a stroke.

“This is a potential milestone in the treatment of atrial fibrillation” said Suneet Mittal, M.D., director of electrophysiology at Valley. “AFib is a life-changing disorder that causes devastating consequences, including stroke and congestive heart failure. Using the Lariat device as an adjunct to conventional ablation could become the standard of care for patients with persistent and/or long-standing persistent AFib.”

In a recently published study, the Lariat used as an adjunct to ablation in patients with persistent or long-standing persistent AFib showed a 65 percent freedom from AFib at one year compared with 39 percent in patients with ablation alone. Other studies have demonstrated that the device not only closes the LAA mechanically, but can also isolate electrical activity within the LAA — a known trigger for AFib, shown to contribute abnormal electrical activity in a significant percentage of patients.

The objective of the aMAZE trial is to demonstrate that the Lariat will reduce or eliminate these LAA triggers and, when combined with ablation, will lead to a reduced incidence of recurrent AFib compared to ablation alone, with a high safety profile.

The Lariat is a permanent, non-implant solution to LAA closure that is being studied for its capabilities to both mechanically and electrically isolate the LAA in patients with AFib. The device utilizes remote suture delivery to close the LAA from the outside of the heart in a precise and controlled manner.

The aMAZE trial is comprised of two stages. The overall study plan is to enroll a maximum of 600 persistent or longstanding persistent AFib patients who are candidates for catheter ablation at up to 50 centers. The first stage of the trial, underway now, will enroll up to 175 patients at 15 centers.