Mortality benefit goes beyond that achieved with standard medical therapy alone, could help bridge patients to evaluation for ICD placement 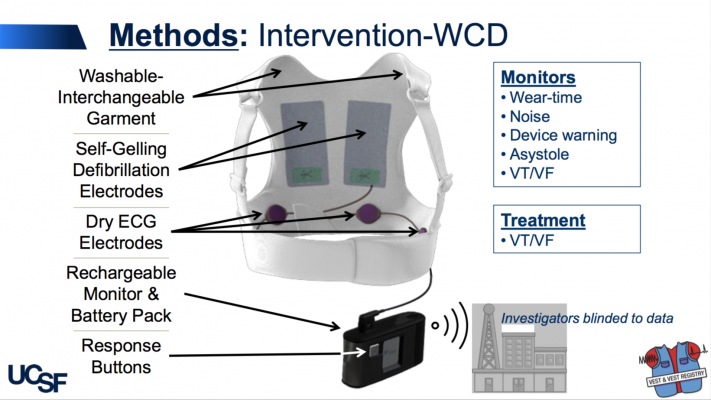 On behalf of VEST investigators

March 13, 2018 –  Wearing a lightweight vest equipped with a cardioverter defibrillator that detects abnormal heart rhythms in addition to taking recommended medications is associated with a reduction in the likelihood of dying during the first 90 days following a heart attack in people whose heart function was also impaired, according to a study presented at the American College of Cardiology’s 67th Annual Scientific Session. People who wore the wearable cardioverter defibrillator (WCD) during the study timeframe were 35 percent less likely to die for any reason compared with those who received medications alone.  While the study did not find a significant benefit in terms of reducing sudden cardiac death, the primary endpoint, the study did find that the wearable defibrillator was associated with fewer overall deaths.

“It is possible that sudden deaths were misclassified as it’s difficult to define sudden death with accuracy when a death is unwitnessed and there is little documentation,” said Jeffrey E. Olgin, M.D., professor and chief of cardiology, University of California San Francisco and lead author of the study. “But the cause of death is irrelevant if we can prevent it. This study found that the device was associated with fewer deaths among people recovering from a heart attack with low ejection fraction. It’s also the first therapy associated with a mortality benefit above and beyond standard medical therapy immediately after heart attack.”

Watch a VIDEO Demonstration of the LifeVest Wearable Defibrillator System

The Vest Prevention of Early Sudden Death Trial (VEST) is the first randomized, controlled, multi-center trial of the wearable cardioverter defibrillator. It was designed to test whether this device could effectively reduce sudden death in patients who had recently suffered a heart attack and had reduced heart function (defined as a low ejection fraction of 35 percent or less) where the heart wasn’t able to pump sufficient blood to the rest of the body, which is indicative of a sizable heart attack.

Generally, the three-month mortality rate for people recovering from a heart attack who also have reduced heart function is around 5 percent, Olgin said, and that is with optimal medical management. Similarly, in VEST, 4.9 percent of participants in the control group died compared with only 3.2 percent of those wearing the WCD—an absolute difference of 1.7 percent.

“There is a very high risk of death immediately after a heart attack that tails off after about three months,” Olgin said. “The challenge is that we don’t currently have a good way of preventing deaths during this very vulnerable period.”

Despite the high rate of sudden death in the months following a heart attack, implantable cardioverter defibrillators (ICDs) placed in the chest aren’t currently indicated for this patient population before 40-90 days for several reasons. First, large studies have failed to show that implanting an ICD during this period results in long-term reductions in mortality. Second, in many cases someone’s ejection fraction will improve in the ensuing months post-heart attack. In VEST, for example, 60 percent of people with low ejection fraction in the first three months after heart attack recovered and no longer met the criteria for an ICD at 90 days. Lastly, there is competing risk of death from other causes not preventable with a defibrillator—for example, another heart attack or cardiac rupture.

According to Olgin, these new findings suggest WCDs could fill the gap in cardiac therapy until patients can be evaluated for an ICD. Current guidelines recommend the WCD as a potential tool that practitioners can use, but the researchers believe findings from this large randomized trial will add important data to further inform these guideline recommendations.

The LifeVest WCD is worn under clothing, directly against the skin and works by continuously monitoring a patient’s heart and sounding alarms and/or giving verbal commands to encourage people to seek medical care, if needed. If a life-threatening heart rhythm is detected, the device delivers a shock to restore a normal heart rhythm.

“What’s nice about the wearable defibrillator is that it’s non-invasive and it’s not permanent,” Olgin said. “Based on our results, I think we’ll see more widespread use of this device in these patients.”

The trial enrolled 2,300 adult patients admitted to the hospital for heart attack with an ejection fraction of ≤ 35 percent across more than 100 trial sites in four countries. Upon discharge, patients were randomized 2 to 1 to either receive the WCD plus guideline-directed medical therapy or guideline-directed medical therapy alone for 90 days to determine the potential mortality benefit of the WCD.

Patients were advised and reminded to wear the WCD as much as possible and only take it off for bathing; participants who wore the WCD did so for an average of 21 hours a day. The primary outcome was sudden death at three months and secondary outcomes were total and cause-specific mortality, non- fatal ventricular arrhythmias and hospitalizations. Participants and sites were not blinded to the treatment arm, but they were blinded to any arrhythmia detections during the follow-up. Un-blinding could be requested if a participant had a shock, cardiac arrest or syncopal event. Outcomes were adjudicated by an independent, blinded panel.

The vast majority of patients in both groups—upwards of 85 percent—received appropriate guideline- directed treatment for post-heart attack management, as well as heart failure management given patients’ reduced ejection fraction. At the end of the study, researchers searched the National Death Index for participants lost to follow up. The rate of cardiovascular-related re-hospitalizations was 25 percent and was similar in both groups.

He and his team are working on a number of additional analyses from this study. They also plan on transitioning patients into a registry for longer-term follow up.

This study was funded, in part, by the National Institutes of Health and Zoll Medical Corp., which makes the LifeVest WCD.