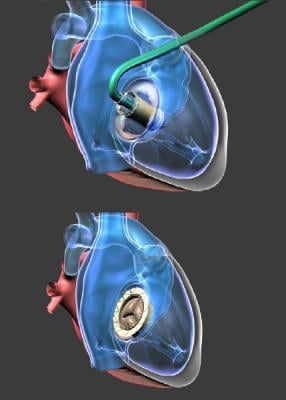 August 31, 2017 — NaviGate Cardiac Structures Inc. (NCSI) announced that its Gate catheter-guided tricuspid atrioventricular valved stent (AVS) was implanted through the jugular vein six weeks ago into a patient’s transplanted heart that was failing due to severe tricuspid valve insufficiency.  The successful implantation of the Gate AVS at the Policlinico of the University of Padua, Italy, represents the first European patient treated with the NCSI tricuspid replacement heart valve. Three hours after the intervention the patient was awake and showing improved renal function. Now, approximately two months post-procedure, the patient continues to demonstrate clinical improvement and excellent valvular function. This brings the total number of NCSI Gate tricuspid implants without 30-day mortality to three.

The patient, a 67-year-old male with a long history of cardiac conditions, received a heart transplant in 1990 for post-ischemic dilated cardiomyopathy and had a host of comorbidities [hypertension, osteoporosis with vertebral fracture, radical prostate surgery due to cancer (2006), and upper and middle right lobectomy for bullous dysplasia (2009)]. Since the beginning of 2017, the patient has had five hospitalizations for heart failure due to severe regurgitation of the tricuspid valve of his transplanted heart. When the patient was released home five days after the procedure, the Gate showed a transvalvular gradient of 2 mmHg with a trivial perivalvular leak. Also notable was that at discharge the patient’s renal function had improved significantly and a dramatic reduction in diuretics was prescribed.

NCSI President and CEO Rodolfo Quijano, M.D., Ph.D., said it was the first implantation of a size-52 mm Gate AVS.

NCSI differentiates the Gate from all other valves presently manufactured for atrioventricular heart valve replacement by its delivery design in the form of a diffuser or truncated cone. This design for all annulus-capturing sizes exhibits a low height profile that can be more easily threaded through the vasculature to reach the atrioventricular valves, allowing it to reside without protruding into either of the adjacent chambers (atrium or ventricle) of dilated mitral or tricuspid valves, as protrusion is known to cause certain complications.

Tricuspid regurgitation (TR) has lately received intensive attention after being ignored for decades as the aortic and mitral valves have been the focus of efforts in new transcatheter technology for repair or replacement. Moderate-to-severe TR is a burgeoning health problem both in the developed and underdeveloped world, and estimates in the United States alone are approaching the 2 million patient mark yearly. When at the severe stage, patients are at prohibitive risk for standard cardiac surgery.

NCSI questioned if the atrioventricular Gate valve would be suitable for a transplanted heart and consulted with its scientific advisory board (SAB), a group that comprises, among others, Rebecca Hahn, M.D., from Columbia University Medical Center, N.Y., an expert cardiologist-echocardiographer in atrioventricular valves; and Azeem Latib, MB BCh, FCP, a well-known interventional cardiologist with extensive expertise in treatment of tricuspid valve disease from San Rafaelle Medical Center in Milan, Italy.

The NCSI SAB, acting as an ad hoc patient selection committee, examined the case and determined that the Gate device would be suitable for the transplanted heart. The patient had become symptomatic for right heart failure and was considered at prohibitive risk for standard cardiac surgery and opted to make a compassionate plea to Drs. Andrea Colli and Gino Gerosa, his physician surgeons, for the NCSI valved stent under development. The Italian Ministry of Health allowed the implant as a last resort for the patient. Prof. Giusseppe Tarantini, chief of interventional cardiology, and Colli proceeded with the implantation. It was ascertained that the measured diameter of the dilated annulus of the incompetent valve was so large that it would require a 52mm Gate, the largest tricuspid valved stent, in order to correct the torrential TR. After receiving the valve, the patient became stable and three hours after was awake and showing improved renal function.

Tarantini found the Gate device to be very “user-friendly,” adding: “I like this valve, it is easy to use and took less than 10 minutes to place once we entered the right atrium. This will be helpful to many patients with advanced tricuspid insufficiency.”

Tarantini will be leading the transjugular clinical implants in Padua while Gerosa and Colli will lead the transatrial surgical implants as the clinical trials commence.

NCSI’s technology is not approved for investigational use in the United States.

Watch the VIDEO "Mitral and Tricuspid Valve Repair Technologies," an interview with Azeem Latib at ACC.17.