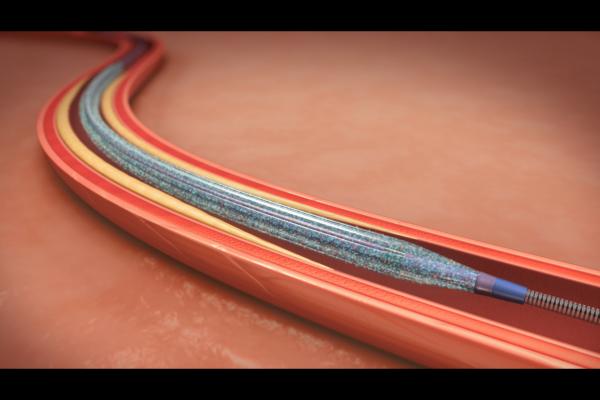 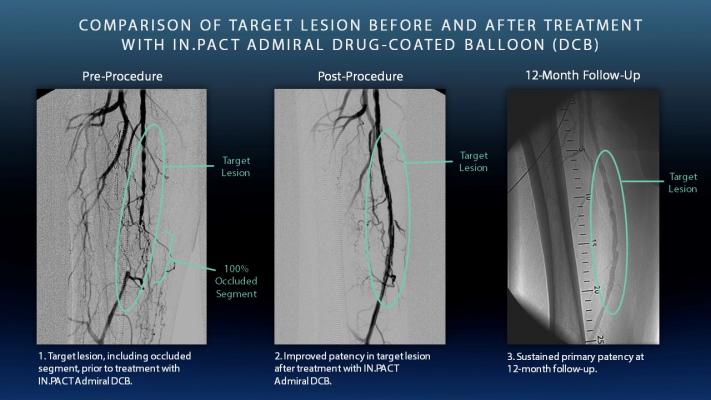 January 5, 2015 — The U.S. Food and Drug Administration (FDA) has cleared Medtronic’s In.Pact Admiral drug-coated balloon (DCB) for the interventional treatment of peripheral artery disease (PAD) for the superficial femoral and popliteal arteries in the upper leg. This is the second drug-eluting balloon (DEB) cleared by the FDA, the first being C. R. Bard’s Lutonix 035 approved in November.
DEBs are a new technology expected to greatly impact the treatment of PAD, which is plagued by very high restenosis rates following traditional balloon angioplasty. Once the DEB is expanded, it releases the antiproliferative drug paclitaxel into the vessel wall, preventing the buildup of neointimal scar tissue and restenosis due to vessel trauma caused by angioplasty. Paclitaxel has a very high pharmacokinetic transfer rate into the tissue of the vessel wall and and is used on both DEBs now on the U.S. market. The agent is also used on some coronary and peripheral drug-eluting stents.
The In.Pact Admiral DCB offers patients a new therapy option that has demonstrated the some of the best clinical outcomes reported for PAD and has been proven to reduce the need for costly repeat procedures that are commonly associated with other available interventional PAD therapies.
“The introduction of drug-coated balloons represents a significant breakthrough that might establish a new standard of care with its potential to change the way we treat peripheral artery disease in the leg,” according to Michael Jaff, DO, Paul and Phyllis Fireman Chair in Vascular Medicine at the Massachusetts General Hospital and professor of medicine at Harvard Medical School in Boston, Mass., who participated in the studies that led to the new device’s FDA approval as the medical director of VasCore, the Vascular Ultrasound Core Laboratory. “Data from clinical trials evaluating this new drug-coated balloon have consistently demonstrated improved patient outcomes.”
Key Clinical Data
The DCB arm of the In.Pact SFA Trial demonstrated the lowest clinically driven target lesion revascularization (CD-TLR) rate ever reported for an interventional treatment of PAD in the superficial femoral artery (SFA), with only 2.4 percent of patients treated with the In.Pact Admiral DCB requiring a repeat procedure at one year, compared to one in five patients (20.6 percent) treated with percutaneous transluminal angioplasty (PTA).
The data also revealed the highest reported rates of primary patency, which measures sustained restoration of adequate blood flow through the treated segment of the artery. Based on Kaplan-Meier survival estimates for primary patency at 360 days, the data showed an 89.8 percent sustained restoration of blood flow in the DCB group compared to 66.8 percent for the PTA group. Using the trial’s protocol definition, primary patency assessed at 12 months of follow up was 82.2 percent for the DCB group and 52.4 percent for the PTA group.
The exceptionally positive clinical data from the pivotal In.Pact SFA Trial has been approved by the FDA without the use of an independent advisory panel. The trial compared treatment with the In.Pact Admiral DCB to standard balloon angioplasty.
By reducing the need for repeat procedures, the new device is also proving to be economically attractive. Results from an interim economic analysis of the In.Pact SFA Trial revealed that treatment with the In.Pact Admiral DCB is cost-effective compared to balloon angioplasty from discharge through one-year of follow-up, indicating the potential to lower overall healthcare costs over the longer term.
The In.Pact Admiral DCB received the CE (Conformité Européenne) mark in 2009 and has been widely adopted by European physicians, leading the market with nearly 100,000 patients treated.
In.Pact Admiral DCB
The In.Pact Admiral DCB uses a proprietary coating of the drug paclitaxel and a naturally occurring excipient of urea, which facilitates transfer of the drug from the balloon into the artery wall. Paclitaxel is delivered in a 3.5 µg/mm2 dose to maximize therapeutic benefit and remains at therapeutic levels for up to 180 days. The device is available in 40, 60, 80, and 120 mm lengths and can accommodate vessels ranging from 4-7 mm in diameter.
In.Pact Admiral is the most studied drug-coated balloon to date, with more than 3,500 patients enrolled in ongoing clinical trials around the world that demonstrate positive, consistent results across a broad range of patient populations, both in randomized controlled and real-world settings. Reproducible, positive outcomes were observed in the In.Pact Global single-arm study, the largest and most rigorous post-market evaluation of its kind, which enrolled a real-world patient population with more complex disease and more challenging lesions.
Peripheral Artery Disease
PAD affects an estimated 8–12 million people in the U.S.[1] PAD most commonly affects arteries in the legs, and when present in the upper leg, greatly increases risk of a sudden heart attack or stroke.[3] Blocked blood supply to the muscles and tissues in the legs can cause recurrent and painful muscle cramping in the thigh and/or upper calf while walking or climbing stairs that can be restrictive and impair quality of life. Experiencing pain, even while at rest or while sleeping, is a sign of a more severe disease. Without proper treatment, 30 percent of people with PAD are likely to die within five years from a PAD-related heart attack or stroke.[2]
For more information: www.medtronic.com
References:
1. National Heart Lung and Blood Institute (NHBLI). Facts About Peripheral Arterial Disease (PAD) n.d. Web.
2. Hirsch AT. Criqui MH. Treat-Jacobson D. et al. Peripheral arterial disease detection, awareness and treatment in primary care. JAMA. 2001;286(11), 1317-1324.
3. Prognosis of Patients With Peripheral Arterial Disease Differs According to the Disease Localization. J Am Coll Cardiol. 2010;55(9):898-903.