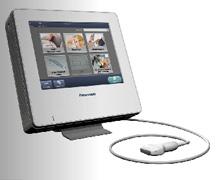 April 14, 2011 – The U.S. Food and Drug Administration (FDA) has cleared a portable cardiovascular imaging system. The Panasonic CardioHealth Station, which was unveiled at the American College of Cardiology (ACC) 2011 Scientific Sessions, is an automated and portable cardiovascular imaging device that aims to complement traditional blood pressure and cholesterol measurement and helps detect the hidden risk of heart attack and stroke. The FDA decision allows Houston-based CardioNexus to sell the system for use in hospitals, community clinics, cardiologist, internist and family physician offices, as well as in retail healthcare clinics. The device, which relies on Panasonic's high-resolution, real-time ultrasound technology, measures the thickness of the arterial wall through the skin quickly and reproducibly. It enables physicians, their assistants and nurse practitioners who are not specialized in ultrasound imaging to use the device and detect high-risk patients. "The CardioHealth report which combines Framingham Risk Score with carotid IMT and plaque assessment provides a more accurate assessment of a patient's risk than measuring blood pressure and cholesterol alone," said Morteza Naghavi, M.D. president and CEO of CardioNexus Corp. "It takes us beyond the status quo and empowers internists and primary care physicians to use noninvasive imaging in their office." According to a 2010 study, only 23 percent of 136,905 patients hospitalized with coronary artery disease had high LDL, or "bad cholesterol" levels while 77 percent were reported to have normal LDL levels and therefore would not have been identified as high-risk. The noninvasive imaging feature represents a breakthrough introduction into the primary healthcare market by the collaborative effort of CardioNexus and Panasonic Healthcare since their partnership was announced last October. Other features, such as point-of-care genetic testing for monitoring response to drug therapies, which collectively aim at personalized preventive medicine, will be introduced in the future. "We've already seen tremendous interest in the technology, particularly among internists and primary care physicians who up until now have not had an automated non-invasive imaging technology in their office," said Steven Lynum, director of Panasonic Healthcare's clinical products and executive vice president at CardioNexus. "CardioHealth Station allows them to easily incorporate atherosclerosis imaging in their management of cardiovascular patients based on the recent guidelines." It includes a handheld ultrasound probe to scan the carotid arteries on both sides of the neck and to detect hidden plaque build up and increased thickness in the artery wall. Testing is performed in a matter of minutes without pain, discomfort or exposure to radiation; and the results are available immediately. For more information: www.cardionexus.com