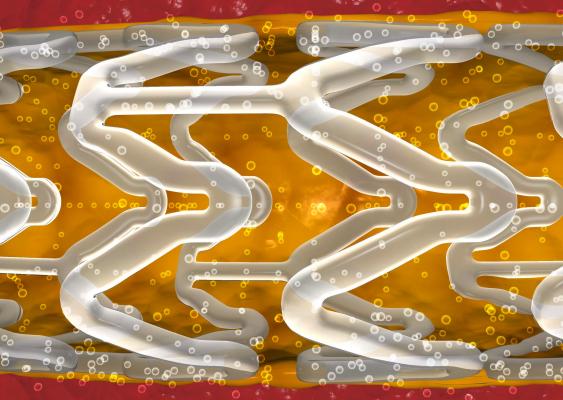 April 16, 2014 — Abbott announced it has completed enrollment of three clinical trials to support approvals of the company's Absorb bioresorbable vascular scaffold (BVS) in the United States, Japan and China. Combined, the U.S., Japan and China account for more than 50 percent of the world's heart stent market. Absorb received CE mark in 2011 and is available in more than 60 countries around the world.

"The randomized clinical trials for Absorb demonstrate Abbott's commitment to provide the highest level of clinical evidence possible to assess Absorb compared to metallic drug-eluting stents, the current standard of care," said Charles A. Simonton, M.D., FACC, FSCAI, divisional vice president, medical affairs, and chief medical officer, Abbott Vascular. "We look forward to evaluating the results of these trials, which we intend to submit to support regulatory approvals of the device."

The ABSORB III clinical trial, which enrolled approximately 2,000 people in the United States, will evaluate the potential benefits of Absorb in people with coronary artery disease, a narrowing of one or more arteries that supply blood to the heart. The primary endpoint of ABSORB III is target lesion failure (TLF), a combined measure of the safety and effectiveness of Absorb in comparison to the company's Xience family of drug-eluting stents at one year.

"The rapid completion of enrollment in the Absorb randomized trials is a testament to the interest among doctors and patients in advancing new options to treat heart disease," said Gregg Stone, M.D., FACC, FSCAI, director, cardiovascular research and education, Center for Interventional Vascular Therapy, Columbia University Medical Center, New York-Presbyterian Hospital. "Absorb represents an entirely new approach to helping people with heart disease by doing the job of a metallic stent, but then disappearing after its work is done, giving people the opportunity to live their lives free of a permanent metallic device implanted in their arteries."

"The medical community eagerly awaits the results of the randomized trials for Absorb," said Dean Kereiakes, M.D., FACC, FSCAI, medical director of the Christ Hospital Heart & Vascular Center and the Lindner Research Center in Cincinnati, and professor of clinical medicine at Ohio State University. "We have made tremendous progress in interventional cardiology with the advances in metallic stents. A device that could provide similar benefits but not leave behind a permanent implant has the potential to transform the way coronary artery disease is treated."