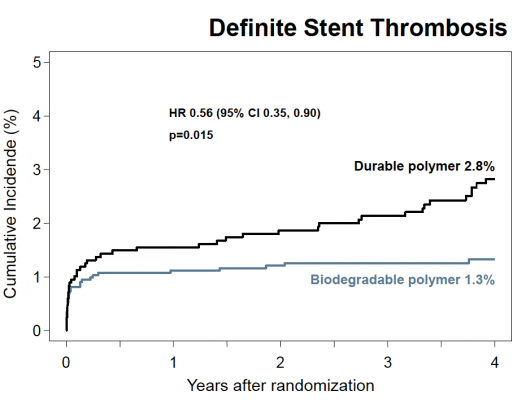 March 27, 2012 — Biodegradable polymer drug-eluting stents (DES) provide better long-term safety and efficacy than durable polymer DES, according to findings from an analysis of three major clinical trials — ISAR-TEST 3, ISAR-TEST 4 and LEADERS. The data were presented at at the American College of Cardiology’s 61st Annual Scientific Session.

“Because it is often difficult to design individual trials to test for differences in rarely occurring adverse events [like stent clotting], we pooled the data from the three largest trials to see if any differences between the two stent types could be seen,” said co-lead investigator Robert A. Byrne, M.B., B.Ch., Ph.D., a cardiologist at Deutsches Herzzentrum in Munich, Germany. “In addition, by including surveillance out to four years, this helped us better capture the differences between the two stents, as benefit was expected to first emerge with long-term follow-up.”

While the arrival of DES has allowed interventionalists to provide treatment for more complex patients, concerns have arisen about the stents’ long-term safety, particularly concerning stent thrombosis. As a result, the polymer coating on the first-generation stents was targeted as an area for improvement. Specifically, the durable polymer remains in the coronary artery wall beyond the time when its useful function is served. This may cause delayed healing and a hypersensitivity reaction, leading to inflammation and stent thrombosis.

As a potential solution to these problems, new-generation stents with a bioabsorbable polymer were created. This polymer, which fully degrades and leaves a bare-metal stent in place, has been suggested to shorten healing time and cause less inflammation and subsequent stent thrombosis.

The current analysis was industry independent, supported in part by a grant from the Swiss National Science Foundation, and conducted at the ISAR Research Center in Munich, Germany, and the Clinical Trials Unit in Bern, Switzerland.

This study was simultaneously published in the European Heart Journal and was released online at the time of presentation.

The results offer a promising outlook for Boston Scientific's Synergy DES, now in development. It uses the same platform stent as the Ion and Promus, but instead of a duable polymer it uses abluminal biodegradable polymer containing everolimus. The company presented its first-in-man study at TCT 2011 and hopes to begin its EVOLVE II U.S. Food and Drug Administration (FDA) investigational decive exemption trial later this year.