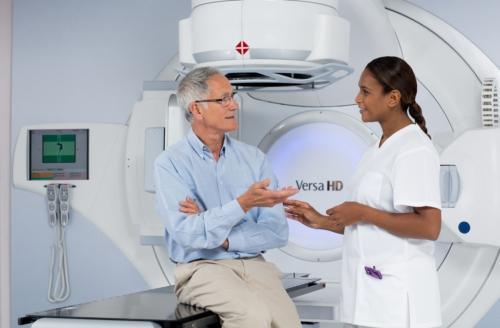 March 24, 2015 — A new study published online in the journal Radiology found a substantial gap between patient expectations and current practices for providing information about medical imaging tests that use radiation. Researchers said the findings highlight a need for better communication as medicine enters an era of patient-centered care.

In recent years, there have been numerous reports in the media about potential risks of tests that use ionizing radiation. However, benefit-risk discussions about ionizing radiation from medical imaging are rare and seldom initiated by clinicians.

For the new study, researchers from Memorial Sloan Kettering Cancer Center (MSKCC) in New York City analyzed more than nine hours of transcribed conversations with 30 people who had undergone medical imaging exams. The goal of the analysis was to determine their understanding of the benefits and risks associated with various medical imaging procedures and their expectations regarding communication of those benefits and risks.

The study group was divided into six focus groups, including five groups of cancer patients and one group of participants in a lung cancer screening program. The study found that participants perceived clear benefits from imaging tests like X-rays, computed tomography (CT) scans and nuclear medicine examinations, but that patient knowledge regarding which imaging tests use ionizing radiation was variable and generally poor.

Most participants were highly aware of risks associated with ionizing radiation exposure, including the potential risk of future cancer, but expressed a desire to receive this information from their own doctor.

In addition to information about risk, the patients expressed a desire to be offered information concerning the rationale for specific test orders and testing intervals, as well as testing alternatives. Most met their needs for more information through self-directed Internet searches.

“This may not be what we in the medical field want to hear, but I think it’s important that we hear it,” said senior author Jennifer Hay, Ph.D., a behavioral scientist at MSKCC. “Patients want this information, and they prefer to receive it from doctors they know and trust.”

Participants desired a wide range of information about medical imaging tests. Most wanted basic education about which imaging tests used ionizing radiation and how doses compared among them. Nearly all the patients wanted to understand how tests differ, what governs selection of one over another, and why multiple tests are sometimes ordered. Most agreed that learning about possible future risks was important but that having this information would probably not alter their decision to proceed with a recommended test.

The desire for information on the risks associated with ionizing radiation from medical imaging was strongest among patients who had made the transition from treatment to survivorship. These patients wanted to know how risk accumulates from multiple exams over time, whether additional ionizing radiation exposure could be avoided by substituting MRI for CT, and if longer intervals between follow-up examinations could be negotiated.

“Interest in having more information and participating in decision making about medical imaging clearly increased as patients transitioned from active cancer treatment to survivorship,” said the study’s lead author Raymond H. Thornton, M.D., an interventional radiologist at MSKCC. “Cancer survivors typically focus on healthful living and risk-factor reduction, so they were particularly eager to participate in discussions about potential long-term risks of radiation.”

The different levels of desire for information among patients lend support to a tiered approach for patient-centered communication, according to Hay.

“A tiered approach would provide all patients with information and offer additional options to those who want to dig deeper and find out more,” she said.

Despite concerns about future risks, the study participants expressed appreciation for the imaging tests, with many emphasizing that imaging reports were a patient’s most important evidence of treatment efficacy.