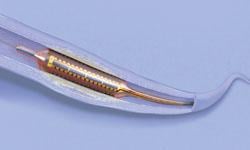 In recent years, many medical device companies saw the underserved lower extremity as an opportunity to enter the market for peripheral artery disease (PAD) treatments. For this reason, device innovation and clinical trials in this segment have been robust.

In the past, stenting in the femoropopliteal arteries — including the superficial femoral artery (SFA) — often led to stent fracture. This is due to the powerful thigh muscles surrounding these arteries that subject stents to strong torsion, compression, flexion and extension forces. PAD in the infrapopliteal arteries was also difficult to treat using stents that had seen success in the iliac artery because of the restrictive vessel size and associated high restenosis rates. As a result, companies have been focusing on developing novel devices that specifically address these limitations and offer new techniques for treating lower-extremity PAD.

In early 2009, C. R. Bard gained U.S. Food and Drug Administration (FDA) clearance for its LifeStent FlexStar and FlexStarXL, devices designed specifically for treating PAD in the SFA and proximal popliteal arteries. The LifeStent, which was investigated in the LifeStent RESILIENT clinical trial, boasts fracture rates of only 3.8 percent after 18 months. The 170 mm long device is designed to treat the longer femoropopliteal arteries and withstand the strong muscular forces of the leg. C. R. Bard joins the likes of W. L. Gore and ev3, two of the first competitors to have stents approved for the treatment of PAD in SFA.

Cook Medical’s position in the lower-extremity PAD treatment market will be bolstered by the U.S. launch of its Zilver PTX drug-eluting stent for the SFA. This device, which launched in Europe in 2009, is still undergoing clinical investigation and awaits FDA clearance. Clinical trial results have been positive. Preliminary data demonstrated 82 percent of patients treated with the paclitaxel-coated device were free from reintervention two years later.

Stents are not the only area of device innovation in the lower-extremity PAD device market. Many competitors continue to invest in research and development in percutaneous transluminal angioplasty (PTA) balloon catheters. Although stents have shown higher rates of revascularization in some arteries than PTA, their associated complications have prompted many physicians to treat PAD using only a balloon in the lower extremities. While success rates with stents are improving in light of new innovations, many continue to employ PTA either alone or in combination with a stent.

In June 2009, Cook Medical announced FDA approval of the Advance PTA balloon catheter for use in the femoral arteries, in addition to the iliac and renal arteries. The device’s low profile enhances deliverability through tortuous anatomies and smaller vessels. It is available in three different sizes to support use in the larger SFA arteries and the smaller infrapopliteal arteries.

Invatec also made strides in 2009 in the treatment of lower-extremity PAD with PTA when it became the first to launch a drug-eluting balloon for the infrapopliteal arteries. The company launched the paclitaxel-coated In.Pact Amphirion balloon in Europe in early 2009. Invatec began a randomized clinical trial in mid-2009 to investigate the efficacy of its device against standard PTA. With headquarters in Europe, the company was actively looking to expand its U.S. presence, entering distribution agreements with Lumen Biomedical and Cardiovascular Systems Inc. In early 2010, the company received even more recognition when Medtronic announced plans to acquire Invatec.

Compared to stents and PTA balloon catheters, atherectomy is a new territory for device innovation. Atherectomy devices are used to excise plaque from inside the artery wall. Competitor focus in this area thus far has been on treating the arteries of the lower extremities. In February 2010, Pathway Medical announced FDA approval for its newest peripheral atherectomy catheter, the Jetstream G3, for use in the treatment of PAD in the lower limbs. The Jetstream G3 is marketed as being capable of treating the entire spectrum of PAD, including hard and soft plaque, calcium, thrombus, and fibrotic lesions, with consistent results.

Another active competitor in the atherectomy market is ev3. Having acquired the SilverHawk device through its purchase of FoxHollow in 2007, ev3 pursued the launch of its next-generation RockHawk in 2009. Although the device is currently approved for surgical use, ev3 is hoping it will also gain approval for endovascular use.

Spectranetics, the only company to offer laser technology for plaque excision, also explored new areas of lower-extremity PAD treatment in 2009. In mid-2009, the company submitted its atherectomy products for FDA approval for the treatment of in-stent restenosis in leg arteries. The submission cited preliminary data from the German-based PATENT trial, which showed no evidence of stent damage following the use of laser atherectomy to treat in-stent restenosis.

With revascularization as the main goal of PAD treatment, the most difficult lesions to treat are chronic total occlusions (CTOs). Historically, CTOs could only be treated through lifestyle management, drug therapy or surgery, but device innovations in CTO crossing present new opportunities.

In early 2009, Stereotaxis announced the first crossing of a CTO using its radio frequency PowerAssert Magnetic Guidewire on a patient with 100-percent occlusion in the leg. The technology allows physicians to create an opening through which other devices, such as stents and PTA balloon catheters, can pass in order provide the main mechanism of revascularization.

More recently, in February 2010, FlowCardia began enrolling patients in its CENTRAL clinical study. It will investigate the efficacy of the company’s Crosser device in navigating the central lumen of SFA CTOs.
As these new technologies continue to garner supporting clinical data, physician adoption will improve, strengthening overall peripheral vascular device revenues in the United States. Patient demand for these minimally invasive innovations will further serve to increase revenues in the U.S. peripheral vascular device market.