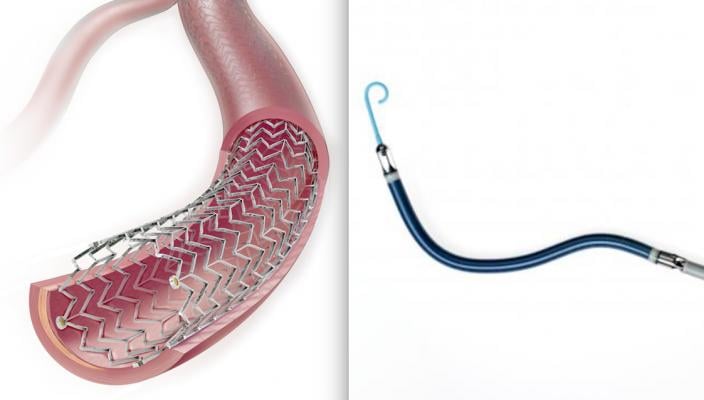 Two device technologies raised concerns in the industry based on recently released clinical data. The Cook Zilver PTX paclitaxel-eluting peripheral stent is among the devices included in a study questioning long-term safety of paclitaxel. The Abiomed Impella RP had higher than expected mortality in its post-approval study, possibly due to poor patient selection and implanting the device too late to aid the patient.

Clinical study data makes the world go around in cardiology and is the basis of setting guidelines in evidence-based medicine. However, hiccups in this data can remind us that there is often more than meets the eye in raw numbers, as is the case with two recent late-breaking news items in interventional cardiology. The first was clinical data in a large meta-analysis of trials showing increased mortality in patients treated with paclitaxel eluting peripheral artery disease stents and balloons. The second was post-approval study data for the Impella RP right heart percutaneous heart pump, which showed only 17.4 percent of patients who receive the device survived.

Both of these headliners grabbed a lot of attention and have prompted numerous reviews of data collected to date on all of these devices. Both topics are expected to be added on the agendas for several upcoming cardiology conferences in 2019. While the issues are being taken seriously, many suspect the final analysis in both cases will show data-driven false alarms.

While the data appears to show negative safety signals, many experts believe questions will be raised about the demographics of the patients included in these studies. In both cases, it appears higher mortality rates might be linked to the cohorts being composed on only the sickest patients or those with numerous co-morbidities, which may have played a role in why their death rates were higher — not necessarily a reflection on the devices used.

The long-term safety profile of paclitaxel was recently called into question with a meta-analysis by Katsanos et al published in the Journal of the American Heart Association (JAHA) on Dec. 17, 2018. It showed higher mortality rates after two years in patients who received devices that elute paclitaxel from a stent or a drug-coated balloon. The study raised concerns with the U.S. Food and Drug Administration (FDA), which issued a warning letter to alert physicians of these findings Jan. 17, 2019.

"I was not surprised at all by the FDA letter, but it did not change my practice, because the benefit of the technology outweighs the risks," said Mehdi Shishehbor, DO, FSCAI, director of the Cardiovascular Interventional Center and co-director of the Vascular Center at University Hospitals Harrington Heart and Vascular Institute, Cleveland, Ohio. He also is the chair of the Society for Cardiovascular Angiography and Interventions (SCAI) Vascular Disease Council, which is closely monitoring the paclitaxel issue. "This is an important issue and SCAI has gotten a lot of phone calls from members, doctors and hospitals about this."

He said SCAI conducted a review of the meta-analysis and concluded the methods are fairly appropriate and are within constraints of trial-level meta-analysis. However, it is important to note the associations are hypothesis-generating and require further investigation with patient-level data. The society reviewers noted several study limitations. The biggest of these is that less than 50 percent of the trials report data beyond one year, and only 3 percent at five years. It also did not include patient-level data to adjust for clinical and angiographic differences between those who died and those who did not, and there was no mechanistic explanation for the study findings.

"This increased mortality and paclitaxel appears to be a statistical association, not a causal association. This is a potential hypothesis," Shishehbor said. He explained the higher mortality might be due to the patients who were followed up having more disease, issues with restenosis or co-morbidities causing them to come back to their doctors on a regular basis so they were not lost. There was a big drop-off in patients lost to follow up in the studies after the first year, which might be due to patients not feeling the need to come back because their PAD symptoms went away and the treatments were successful. This would have left only the sickest patients in the study cohort over time.

Read more about the FDA warning letter and response from SCAI.

Patient Selection, Timing Might be Behind High Death Rate With Impella RP

In the case of Impella RP, the premarket FDA approval studies had a 73.3 percent survival rate at 30 days. But, the post-approval study, only 17.4 percent met the primary survival endpoint at 30 days. On the surface it would appear this device does not work very well, but initial investigation by the device maker Abiomed and the FDA found that patient selection and times when using the device might be the culprits. The premarket studies had strict inclusion and exclusion criteria, but it appears from preliminary review of the post-market data that the same rules for patient selection were not applied in may cases.

"Although the FDA is concerned about the high mortality rate from the interim PAS results, we believe that when the device is used for the currently approved indication in appropriately selected patients, the benefits of the Impella RP system continue to outweigh the risks," said William Maisel, M.D., MPH, chief medical officer for the FDA Center for Devices and Radiological Health, in the letter to providers. "We do not know the root cause for the high mortality rate, and the results (of the PAS) are not adjusted for potential confounders."

Clinical data for all Impella devices shows a pattern that earlier use to boost hemodynamic support results in positive outcomes, where as waiting and using the Impella as a last-ditch bail out device appears to have worse outcomes. The original PMA protocols to use the Impella RP said it should be used in patients who have been in cardiogenic shock for less than 24 hours, but this was not followed in 26 percent of patients. None of the patients in the PMA study has in-hospital cardiac arrest, while 56.5 percent in the post-market study did. Only 0.05 percent of patients in the PMA cohort received CPR or ACLS at the time of Impella implant, where as 30 percent required life saving treatment in the post market. It appears the patient populations and timing of device deployments were very different between the pre- and post-market studies. The FDA and Abiomed promise to follow this issue and both reiterated in statements the need for hospitals to follow the device protocols.