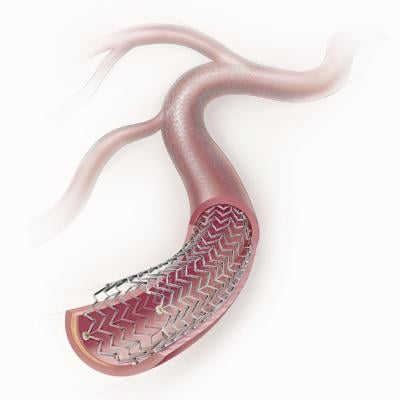 The safety of paclitaxel-eluting stents and drug-coated balloons was called into question in a recent study that showed higher mortality rates after two years. The Cook Zilver PTX paclitaxel-eluting peripheral stent is among the devices included in that study.

The anti-proliferative drug paclitaxel has been used as a coating on coronary stents to prevent restenosis since 2003, and its use has expanded over the past decade to include peripheral stents and drug-coated balloons. However, its long-term safety profile was recently called into question with a new meta-analysis published in Journal of the American Heart Association (JAHA) on Dec. 17, 2018, which showed a higher percentage mortality rate after two years.[1] The study raised concerns with the U.S. Food and Drug Administration (FDA), which issued a warning letter to alert physicians of these findings Jan. 17, 2019. This will likely set the stage for big discussions at upcoming conferences and new studies of paclitaxel in 2019.

The FDA stated in its letter that the recent study "Risk of Death Following Application of Paclitaxel-Coated Balloons and Stents in the Femoropopliteal Artery of the Leg: A Systematic Review and Meta-Analysis of Randomized Controlled Trials," by Katsanos et al, showed a possible increased risk of death at two years and beyond in peripheral artery disease (PAD) patients treated with paclitaxel-coated balloons or paclitaxel-eluting stents. At this time, the FDA asserts that the benefits of paclitaxel-coated devices outweigh the risks when used as indicated. However, the FDA urged healthcare providers to report any adverse events or suspected adverse events with paclitaxel-eluting devices through its MedWatch program.

The FDA said it is evaluating available long-term follow-up data. This includes data from studies that supported FDA clearance of the devices and other available data sets. The agency wants to determine if there are any long-term risks associated with paclitaxel-coated products. The FDA also is conducting additional statistical analyses to clarify the presence and magnitude of any long-term risks and is working directly with manufacturers of these devices to better understand this issue.

"I was not surprised at all by the FDA letter, but it did not change my practice, because the benefit of the technology outweighs the risks," said Mehdi Shishehbor, DO, FSCAI, director of the Cardiovascular Interventional Center and co-director of the Vascular Center at University Hospitals Harrington Heart and Vascular Institute, Cleveland, Ohio. He also is the chair of the Society for Cardiovascular Angiography and Interventions' (SCAI) Vascular Disease Council, which is closely monitoring the paclitaxel issue. "This is an important issue and SCAI has gotten a lot of phone calls from members, doctors and hospitals about this."

In the recent study, the authors analyzed data from 28 previously conducted randomized, controlled trials for 12 different devices used in the treatment of femoropopliteal disease. Researchers found an increase in long-term mortality with paclitaxel-coated balloons and paclitaxel-eluting stents. The key points of the study were:

• Risk was fairly stable in various sensitivity analyses of drug-eluting stents (DESs) vs. drug-coated balloons (DCBs). Interestingly, trials with a higher dose of paclitaxel had a higher risk ratio (highest with a 3.5 mg dose). This dose response was confirmed on meta-regression with 0.4 percent increased risk for every paclitaxel mg-year.

SCAI Weighs in on Paclitaxel Safety

SCAI released a statement to its members Jan. 25, 2019, explaining the safety concerns of the FDA and offering a brief review of the data. “At present, SCAI concurs with FDA that the benefits of paclitaxel devices continue to outweigh any potential risks,” said SCAI President David A. Cox, M.D., MSCAI.  “However, we strongly encourage our members to discuss the findings of the meta-analysis with their patients and to report any safety concerns to FDA.”

SCAI experts reviewed the meta-analysis and concluded the methods are fairly appropriate and are within constraints of trial-level meta-analysis. However, the statement said it is important to note the associations are hypothesis-generating and require further investigation with patient-level data. The society reviewers noted several study limitations:

• There is no mechanistic explanation for the study findings.

• A post-hoc analysis did not include patient-level data to adjust for clinical and angiographic differences between those who died and those who did not.

• There is evidence of discrepancy in some of the reported numbers.

• The study findings could be by chance — a type-1 error due to multiple testing.

• Less than 50 percent of the trials report data beyond one year, and only 3 percent at five years.

• The equation to assess the paclitaxel dose/time relationship may have overestimated drug exposure and its effect over time.

Shishehbor said more data is needed to get a clearer picture of whether there is a true, long-term safety issue present. "We will see a lot of new information and papers coming out on this in the first quarter of 2019. There will be more studies looking for these safety signals," he explained.

"This increased mortality and paclitaxel appears to be a statistical association, not a causal association. This is a potential hypothesis," Shishehbor said of the Katsanos study data. Since this is not patient-level data, he explained the higher mortality might be due to the patients who were followed up having more disease, issues with restenosis or co-morbidities causing them to come back to their doctors on a regular basis. There was a big drop-off in patients lost to follow up in the studies after the first year, which might be due to patients not feeling the need to because their PAD symptoms went away and the treatments were successful.

• A pooled analysis of 1,980 patients from the In.Pact DCB program demonstrated that at five years, there was no statistically significant difference in all-cause mortality between the IN.PACT Admiral paclitaxel-coated balloon and the control arm (9.3 vs. 11.2 percent respectively, p=0.399).[2].

• Five-year data from 1,189 patients in the Levant 2 Trial within the Lutonix DCB program showed no statistically significant difference in all-cause mortality between DCB and the control group (14.1 vs. 10.6 percent respectively, p=0.22).[6]

Philips Healthcare issued a press release from LINC about the results of the pooled analysis of the Stellarex DCB above-the-knee (ATK) studies. The company said the data reflected a good safety profile of the Stellarex in patient-level data from more than 2,300 patients treated. The independent, third-party pooled analysis also demonstrated low mortality rates through three years after the treatment with no device-related deaths.

“The LINC session provided important new patient-level data regarding mortality in patients with peripheral arterial disease receiving paclitaxel devices – stents or DCBs – to restore and maintain blood flow in the superficial femoral and popliteal arteries in their legs,” said William Gray, M.D., FACC, FSCAI, president of the Lankenau Heart Institute and investigator for the Stellarex clinical trials. He also presented the positive Ranger DCB program data at LINC “The data from the Stellarex clinical trial programs was strong and represented over 2,300 patients. When the three-year-outcomes were examined, there were no cardiovascular or non-cardiovascular mortality differences between the groups treated with Stellarex and the control arm. This is very reassuring, and this patient-level data will be amalgamated with other paclitaxel device data in order to complete the analysis. These efforts are already underway, as is a publication specifically regarding these Stellarex results.”

SCAI said additional details will come out from these meta-analyses and will be examined in peer-reviewed journals in the near future. Additional patient-level analyses are underway by FDA, independent physicians and industry. SCAI said it is closely monitoring this evolving situation.

Here is a link to Cook Medical's webpage set up to address the paclitaxel data questions.

2. Schneider PA. DCBs over the long-term: Are they safe for our PAD patients? Insights from the IN.PACT DCB program. Presented at: LINC 2019. January 22, 2019. Leipzig, Germany.