Event-Free Patients May Not Need Long-Term DAPT After PCI

Results of the ARCTIC-INTERRUPTION Trial Presented at TCT 2013 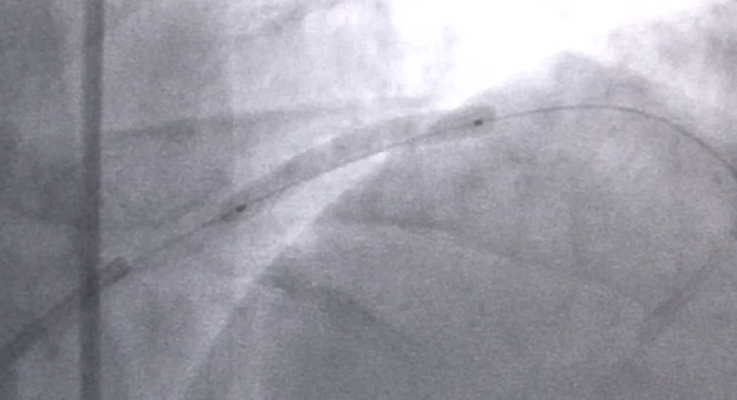 November 4, 2013 — Patients who do not experience a major cardiac event in the first year after receiving drug-eluting stent (DES) may not need to receive prolonged dual antiplatelet therapy (DAPT) according to the results from the ARCTIC-INTERRUPTION trial, which was presented at the 25th annual Transcatheter Cardiovascular Therapeutics scientific symposium (TCT 2013).
The optimal length of time for DAPT after coronary stenting remains uncertain with an unknown safety-to-efficacy ratio of prolonged therapy. Currently, there are discrepancies between international guidelines and high variability in routine practice. The ARCTIC-INTERRUPTION study was a prospective, randomized trial that examined the benefit of the continuation of DAPT for up to two years.
ARCTIC-INTERRUPTION randomly assigned 1,259 patients without major events within the first year after coronary stenting to either a strategy of interruption of DAPT (n = 624) or a strategy of continuation for an additional year (n = 635). The primary endpoint was the composite of death, myocardial infarction, stent thrombosis, stroke or urgent revascularization after one year.
The primary endpoint occurred in 3.8 percent of patients in the continuation group as compared to 4.3 percent in the interruption group. The main secondary endpoint of stent thrombosis or any urgent revascularization occurred in 1.3 percent of patients in the continuation group and 1.6 percent of those in the interruption group. The rate of major bleeding events occurred in 1.1 percent of the patients in the continuation group compared to 0.2 percent in the interruption group.
“The ARCTIC-INTERRUPTION study suggests no ischemic benefit of DAPT continuation beyond one year after stenting in patients that do not experience an adverse event within the first year,” said Gilles Montalescot, M.D., Ph.D., professor of cardiology, Centre Hospitalier Universitaire Pitié-Salpêtrière, Paris, France, and lead investigator of the study. “Further, the study found significantly more major and minor bleeding events with DAPT continuation."
For more information: www.crf.org