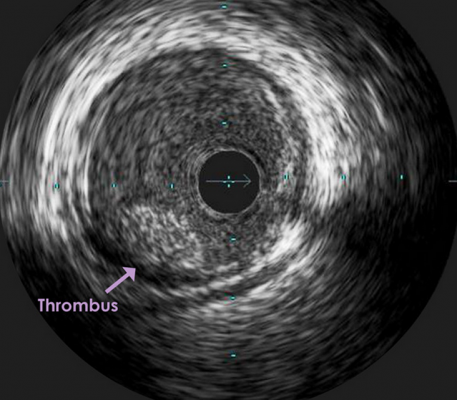 September 2, 2015 — Retrieval of larger thrombi during intra-arterial treatment (IAT) is associated with improved neurological recovery after acute ischemic stroke, according to a sub-study of the MR CLEAN trial. Results of the sub-study were presented at the European Society of Cardiology (ESC) Congress 2015 by Anouchska Autar, Ph.D. candidate at the Erasmus Medical Centre in Rotterdam, the Netherlands.

“Acute ischemic strokes occur when a blood clot, also called a thrombus, embolizes to the brain where it restricts the flow of blood,” said Autar. “MR CLEAN was the first trial to show the benefit of IAT to remove blood clots within six hours after a stroke. IAT, which was given against a background of standard care including intravenous tissue plasminogen activator if indicated, led to better restoration of blood flow and improved functional outcome when compared to no IAT.”

The study included 35 collections of thrombi from 35 patients who had undergone IAT after an acute ischemic stroke. Most of the patients had a severe stroke, of which 49 percent were of cardiac origin and 20 percent were due to atherosclerosis.

The researchers found that patients whose stroke was caused by atherosclerosis had significantly longer and larger thrombi (p=0.0035 and p=0.045, respectively) than those with stroke from other causes. “This could be because patients with atherosclerosis have more diseased arteries and this may influence thrombus size,” said Autar.

They also found that patients from whom longer and wider thrombi were retrieved had significantly improved neurological recovery at discharge after IAT compared to those with smaller thrombi (p=0.03 and p=0.04, respectively). “This finding is particularly important because it indicates that the larger the pieces that you retrieve, the better this is for your patient,” said Autar.

Interestingly, an increased number of particles retrieved during IAT showed a trend towards a worse neurological recovery at discharge, although the association was not significant (p=0.079). Autar said: “Together, this suggests that some emboli are more likely to disintegrate and the smaller particles may embolize and obstruct the microvasculature of the brain, leading to incomplete recovery.”

She concluded: “Our study shows that retrieval of larger thrombi during IAT is associated with improved neurological recovery at discharge in patients with acute ischemic stroke. The findings indicate that a simple parameter such as thrombus size might influence the decision to give or refrain from additional thrombolysis. This needs to be verified of course in larger trials.”