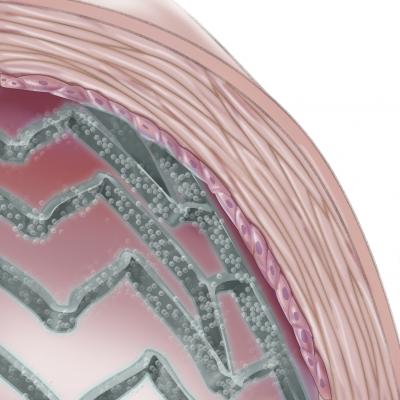 November 2, 2012 — Patients who receive a drug-eluting stent (DES) and demonstrate low levels of platelet inhibition are more likely to have blood clots form on the stent and suffer a possible heart attack; conversely, patients with higher levels of platelet inhibition are at greater risk for bleeding complications. This is according to one-year results of the ADAPT-DES study, presented the 24th annual Transcatheter Cardiovascular Therapeutics (TCT) scientific symposium, sponsored by the Cardiovascular Research Foundation.

At last year’s TCT meeting, ADAPT-DES researchers demonstrated a strong relationship between platelet hyporesponsiveness to clopidogrel and subsequent stent thrombosis (clot formation) up to 30 days after stent implantation. Now after one year of follow-up, the ADAPT-DES team is reporting the overall treatment implications of platelet hyporesponsiveness on patient outcomes.

In this large multicenter registry, 8,583 patients undergoing a percutaneous coronary intervention (PCI) with at least one drug-eluting stent were enrolled at 11 sites between January 2008 and September 2010. Researchers assessed platelet reactivity with the VerifyNow Aspirin, P2Y12 and IIb/IIIa tests. Patients were followed for one year to determine the relationship between platelet hyporesponsiveness and subsequent events. At one year, stent thrombosis occurred in 70 patients (0.84 percent), heart attack in 224 (2.7 percent), major bleeding in 531 (6.2 percent) and death in 161 (1.9 percent).

“Results from the ADAPT-DES registry suggest that clopidogrel hyporesponsiveness after implantation of a drug-eluting stent is an independent predictor of one-year stent thrombosis and heart attack, but it is also protective against major bleeding, both of which impact mortality,” said lead investigator Gregg W. Stone, M.D., professor of medicine at Columbia University College of Physicians and Surgeons, and director of cardiovascular research and education at the Center for Interventional Vascular Therapy at New York-Presbyterian Hospital/Columbia University Medical Center.

“Clopidogrel hyporesponsiveness was not found to be an independent predictor of one-year mortality. Therefore, overcoming clopidogrel hyporesponsiveness with more potent antiplatelet agents is unlikely to improve survival unless the beneficial effect of reducing stent thrombosis and heart attack can be separated from the likely increase in bleeding that results from greater platelet inhibition,” said Stone.

He added, “Hyporesponsiveness to aspirin was unrelated to stent thrombosis, heart attack or death, but may be related to bleeding. This questions the utility of aspirin in patients treated with drug-eluting stents.”