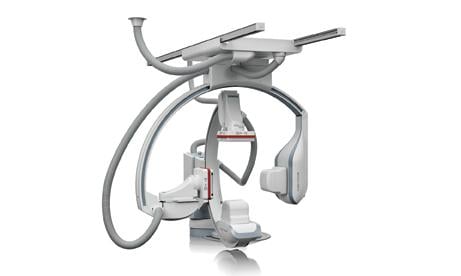 There were three key trends in X-ray vascular imaging systems made evident from new products showcased at the Radiological Society of North America (RSNA) annual meeting in late 2012 and new FDA approvals in 2013. These include new hardware and software to lower ionizing radiation doses and improve image quality, better dose tracking software, and enhanced maneuverability for improved patient access and use in the growing hybrid OR market. As interventional procedures become more complex, imaging times have increased, raising concerns that are now being addressed by vendors.

Instead of detectors based on amorphous silicon, a new crystalline silicon structure of the Artis Q.zen detector is designed to be homogenous, allowing for more effective amplification of the signal, greatly reducing the electronic noise.

Other new 3-D applications are designed to image the smallest structures inside the head. Their high spatial resolution is crucial for imaging intracranial stents or other miniscule structures such as the cochlea in the inner ear. Moving organs including the lungs can be imaged in 3-D in less than three seconds, reducing motion artifacts and the required amount of contrast media.

Philips Healthcare gained FDA 510(k) clearance in July for its AlluraClarity system. It incorporates new ClarityIQ technology to provide high-quality imaging for a comprehensive range of clinical procedures, achieving excellent visibility at low X-ray dose levels for patients of all sizes. The ClarityIQ technology will also be available as an upgrade for the majority of Philips’ installed base of monoplane and biplane interventional X-ray systems.

GE Healthcare introduced its revolutionary Discovery IGS 730 system in 2012. The laser-guided system captures the advantages of both floor- and ceiling-mounted systems without the limitations of either. It uses the same digital flat-panel detector technology as GE Innova interventional imaging systems. However, instead of being fixed in position, the imaging device is on a mobile gantry that can be moved anywhere in the room like a mobile C-arm, but offers precision imaging and features of a fixed system. At the touch of a button, clinicians can move the system to the table for imaging various anatomies and then move it aside and park it, allowing room to optimally position physicians, nurses, technologists, anesthesiologists and other personnel for surgery, with unobstructed access to the patient. The unique gantry comes with a new wide-bore design, which allows for steep angles and ease in 3-D acquisition, especially for large patients.

Toshiba introduced more ergonomic features for its systems at RSNA. The Infinix-i five-axis system’s WorkRite technology feature ensures the interventionalist is in an optimal ergonomic orientation during any procedure. This helps prevent fatigue and injury that can occur when ergonomics are compromised.

Toshiba’s dose tracking software for its Infinix-i angiography system can be displayed on a screen in the cath lab to show the approximate radiation dose that has been delivered cumulatively to specific areas on a patient. It takes into consideration the amount of time, power setting used and orientation of the C-arm to show a color-coded map of radiation delivery projected onto a human figure. GE released a similar software for its angiography systems.

Siemens expanded its solutions portfolio in 2012 by offering the RaySafe i2 personal dosimetry system as an accessory for all Siemens Artis zee angiography systems. It enables real-time information regarding clinician radiation exposure, enabling clinicians to take immediate steps to minimize exposure and establish a high-functioning radiation safety culture within the hospital. It uses a real-time display, personal dosimeters and dose management software.

In January, Philips and Unfors RaySafe signed a joint development agreement for the next-generation DoseAware system that will offer seamless access and communication with the Philips Allura angiography systems. DoseAware provides instant, time-stamped feedback in the examination room so clinicians can immediately adjust working habits to decrease radiation exposure.

Toshiba also has partnered with Unfors RaySafe to offer a new radiation dose monitoring and management tool for Infinix-i systems, released in July. It displays real-time dose exposure information, helping to make exams safer for all clinical staff. Each staff member is assigned a digital, real-time dosimeter, which is wirelessly connected to an in-room-mounted screen displaying radiation exposure. The RaySafe i2 system not only helps staff view radiation exposure level during procedures, it also archives dose exposure history for future analysis.

A new trend among vendors is a move to create special, customized systems used for a specific application, such as electrophysiology (EP) or hybrid surgical procedures. GE Healthcare adopted the name Image Guided Systems (IGS) to encompass angiography’s use as a tool to guide therapies. It now offers IGS packages with features for specific specialties.

In May, Toshiba introduced a specifically tailored EP version of its Infinix-i. This package maximizes room utilization, improves workflow and enhances safety.

This article served as an introduction for a comparison chart on angiography imaging systems. The current version of the chart can be found by clicking on the "Comparison Charts" tab at the top of the screen.